SAN DIEGO (AP) — California Rep. Duncan Hunter pleaded guilty Tuesday to a single charge of conspiring with his wife to use at least $150,000 in campaign funds for personal expenses under a plea deal that a former federal prosecutor called “great” for the congressman who had faced 60 counts.

The six-term Republican showed no emotion in the courtroom when he changed his plea to guilty and admitted he and his wife Margaret misused at least $25,000 in campaign money every year from 2010 to 2016. The charge carries up to a five-year sentence, but the deal calls for prosecutors to recommend much less when a judge sentences him in March.

Former prosecutor Jason Forge said under the terms of the deal it’s likely Hunter will serve about a year in prison and perhaps less.

“I think if you decide to do a high-profile public corruption case, you have to set up an impervious example and they fell far short of this with this plea agreement,” said Forge, who in 2005 prosecuted another San Diego-area congressman, Randy “Duke” Cunningham, in one of the biggest bribery scandals in congressional history.

″Ï would rather go down fighting than agree to this,” he added. “He got a great deal.” 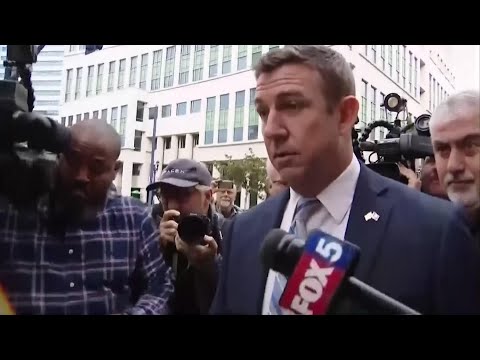 “Appropriately today’s plea is to the major count of the indictment and effectively puts an end to his political career”,” he said. “Mr. Hunter now faces resignation, disgrace and imprisonment.”

Hunter said he and his wife dipped into the election funds between 2010 and 2016 more than 30 times and falsely reported the expenses as campaign related from their daughter’s birthday party at the posh Hotel Del Coronado to an outing with friends at a french bistro.

“I failed to monitor and account for my campaign spending,” Hunter, 42, said outside the courthouse.

He promised to discuss his future later and refused to answer questions about when he would leave the congressional seat he has held for more than a decade.

An early supporter of President Donald Trump’s 2016 election bid, Hunter is the second Republican congressman to plead guilty to federal charges this year.

Accompanied by his father, the former combat Marine who served in Iraq and Afghanistan left the courthouse to jeers of “Lock him up!”

Hunter’s pending departure will mark the end of a political dynasty in Southern California’s most Republican district. His father represented the district for 28 years before Hunter’s 2008 election.

For more than a year, Hunter had insisted that criminal charges against him and his wife were the result of a conspiracy of the “deep state” meant to drive him from office in Democrat-dominated California.

Halpern noted Hunter’s honorable military service and his family’s place in the 50th congressional district. But he had a sharp rebuke for the congressman’s claim that he was targeted because of politics.

“No figure, regardless of what office they occupy, should be allowed in this country to cry witch hunt or fake news and attempt to deflect their criminal wrongdoings,” Halpern said.

Halpern said he would seek a minimum of one year in jail for Hunter.

Prosecutors agreed to recommend a sentence of eight to 14 months, taking off time because of his military service in war zones and unspecified medical conditions. A judge will ultimately determine his sentence and could impose the maximum of five years.

Hunter and his wife were initially charged with 60 criminal counts and prosecutors accused them of spending about $250,000 in campaign funds including for family vacations to Italy and Hawaii, private school tuition for their children, airline tickets for their family’s pet rabbit.

They said the couple was broke and bankrolled their lives with the campaign money.

Prosecutors also revealed Hunter spent some of the money on romantic relationships with lobbyists and congressional aides.

His wife accepted a plea deal in June. In that deal, prosecutors indicated they would not seek a sentence longer than eight months, though Halpern said Tuesday her cooperation helped the prosecution and they had not determined if they will seek any jail time. She also faces a maximum of five years.

Hunter told San Diego TV station KUSI in an interview that aired Monday that a trial would be tough on his three children. He said he hopes his wife is spared jail time.

In October, former four-term Republican Rep. Chris Collins of New York pleaded guilty in an insider trading case, a day after he resigned from Congress.