Rush Limbaugh, the talk radio host who ripped into liberals and laid waste to political correctness with a captivating brand of malice that made him one of the most powerful voices in politics, influencing the rightward push of American conservatism and the rise of Donald Trump, died Wednesday. He was 70.

Limbaugh said a year ago that he had lung cancer. His death was announced on his show by his wife, Kathryn.

He called himself an entertainer, but his three-hour weekday radio show broadcast on nearly 600 U.S. stations helped shape the national political conversation, swaying ordinary Republicans and the direction of their party.

“In my heart and soul, I know I have become the intellectual engine of the conservative movement,” Limbaugh, with typical immodesty, told author Zev Chafets in the 2010 book “Rush Limbaugh: An Army of One.”

He called himself a “truth detector” and “harmless, lovable little fuzz ball” but often trafficked in lies and conspiracies with contempt for his opposition that often veered into cruelty.

When actor Michael J. Fox, suffering from Parkinson’s disease, appeared in a Democratic campaign commercial, Limbaugh mocked his tremors. When a Washington advocate for the homeless killed himself, he cracked jokes. As the AIDS epidemic raged in the 1980s, he made the dying a punchline. He called 12-year-old Chelsea Clinton a dog. 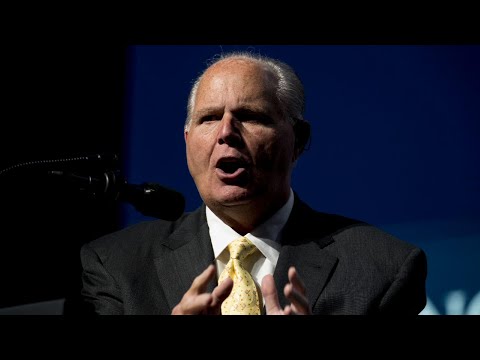 He suggested that the Democrats’ stand on reproductive rights would have led to the abortion of Jesus Christ. When a woman accused Duke University lacrosse players of rape, he derided her as a “ho,” and when a Georgetown University law student supported expanded contraceptive coverage, he dismissed her as a “slut.” When Barack Obama was elected president in 2008, Limbaugh said flatly: “I hope he fails.”

He was frequently accused of bigotry and blatant racism but could often enunciate the Republican platform better and more entertainingly than any party leader, becoming a GOP kingmaker.

Trump, like a long line of conservative politicians before him, heaped praise on Limbaugh, and during last year’s State of the Union speech, awarded him the Presidential Medal of Freedom, the nation’s highest civilian honor. On Wednesday, Trump lauded Limbaugh on Fox News as “a legend” who “was fighting till the very end.”

Limbaugh influenced the likes of Sean Hannity, Glenn Beck, Bill O’Reilly and countless other conservative commentators who pushed the boundaries of what passes as acceptable public discourse.

His brand of blunt, no-gray-area debate spread to cable TV, town hall meetings, political rallies and Congress itself, emerging during the battles over health care and the ascent of the tea party movement.

“What he did was to bring a paranoia and really mean, nasty rhetoric and hyperpartisanship into the mainstream,” said Martin Kaplan, a University of Southern California professor who is an expert on the intersection of politics and entertainment and a frequent critic of Limbaugh. “The kind of antagonism and vituperativeness that characterized him instantly became acceptable everywhere.”

Rush Hudson Limbaugh III was born Jan. 12, 1951, in Cape Girardeau, Missouri. His mother was the former Mildred Armstrong, and his father, Rush Limbaugh Jr., was a lawyer.

Rusty, as the younger Limbaugh was known, was chubby and shy, with little interest in school but a passion for broadcasting. He would turn down the television during St. Louis Cardinals baseball games, offering play-by-play, and gave running commentary during the evening news. By high school, he had snagged a radio job.

Limbaugh dropped out of Southeast Missouri State University for a string of DJ gigs in which he was known as Rusty Sharpe and then Jeff Christie on the air, spinning Top 40 hits and sprinkling glimpses of his wit and conservatism.

“One of the early reasons radio interested me was that I thought it would make me popular,” he once wrote.

But he didn’t gain the following he craved and gave up on radio for several years, beginning in 1979, becoming promotions director for baseball’s Kansas City Royals. He ultimately returned to broadcasting, again in Kansas City and then Sacramento, California.

It was there in the early 1980s that Limbaugh really garnered an audience, broadcasting shows dripping with sarcasm and bravado. The stage name was gone. Rush Limbaugh was on the air, and the public figure who would become known to millions essentially was born.

Limbaugh began broadcasting nationally in 1988 from WABC in New York. While his know-it-all commentary quickly gained traction, he was dismayed by his reception in the big city. He thought he would be welcomed by Peter Jennings, Tom Brokaw and Dan Rather.

“I came to New York,” he wrote, “and I immediately became a nothing, a zero.”

Ultimately, Limbaugh moved his radio show to Palm Beach, Florida, where he died. His fourth wife, the former Kathryn Rogers, whom he married in 2010, survives him. He had no children.

Advertisers were wary to back his late-night TV show in the 1990s, ultimately dooming it. And a bid to become an owner of the NFL’s St. Louis Rams was derailed by his racist remarks, as was a short-lived stint as an NFL commentator on ESPN.

Through all of it, though, Limbaugh proved successful in part for the certainty with which he delivered his broadcasts, never wavering in opinions he regarded as undeniable truth.

“Do you ever wake up in the middle of the night and just think to yourself, `I am just full of hot gas?’” David Letterman asked him in 1993 on “The Late Show.”

“I am a servant of humanity,” Limbaugh replied. “I am in the relentless pursuit of the truth. I actually sit back and think that I’m just so fortunate to have this opportunity to tell people what’s really going on.”