Melania Trump walks through Ghana’s ‘Door of No Return’

CAPE COAST, Ghana (AP) — Melania Trump walked out the infamous “Door of No Return” at a onetime slave-trade outpost Wednesday and gazed over the crashing ocean waves that carried millions of Africans to lives of servitude. She later called her visit “a solemn reminder of a time in our history that should never be forgotten.”

“The dungeons that I saw, it’s really something that people should see and experience,” she told reporters.

The setting was Cape Coast Castle, a 17th century structure overlooking the Atlantic on the coast of the West African nation of Ghana.

Swedes built the castle for use in the trade of timber and gold. But along the way it became a warehouse for Africans as they were rounded up and shipped to the New World and into lives of servitude.

The castle is a familiar stop for U.S. dignitaries visiting Ghana. Then-President Barack Obama brought his family in July 2009. U.S. lawmakers have come, too.

Adding her name to the list Wednesday was the wife of President Donald Trump, who isn’t unanimously seen as a friend of Africa.

Mrs. Trump arrived at the castle after a two-and-a-half hour drive over bumpy roads from the capital, Accra. The first lady spent a few minutes meeting privately with her guide, Kwesi Essel-Blankson, and getting an introductory history of the castle before they emerged into an open area in 80-degree heat and humidity. 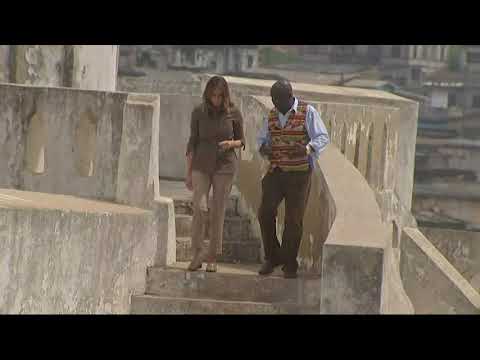 The two stood on an upper level before descending a staircase to walk along a stone path as waves crashed below. Essel-Blankson showed the first lady an old cannonball and then escorted her to the “male slave dungeon.” They spent about 10 minutes inside the mostly dark, cramped holding area before the first lady walked down a pathway that led to the Door of No Return.

It was through this door — and others like it all along the coast of West Africa — that Africans were loaded onto vessels that then took them across the Atlantic with little hope of ever returning to their homeland.

Afterward, the first lady tweeted: “Day two in #Ghana was so impactful. My visit to Cape Coast castle was a solemn reminder of a time in our history that should never be forgotten.”

Before leaving the compound, the first lady laid a wreath, observed a moment of silence and signed a guest book, writing: “Thank you for your warm welcome.” She called the castle “a special place.”

The first lady’s visit was a lower-key affair than Obama’s visit as the first black U.S. president, and reminders of his visit with wife Michelle were prominent.

A marble plaque unveiled by Obama and his wife during their visit hung near the entrance to one of the dungeons.

Before the visit, Mrs. Trump visited nearby Emintsimadze Palace to participate in a traditional ceremony where a regional tribe leader granted her permission to tour the palace. Obama had also been to the palace and his presence was documented there, too.

The ceremony was held inside Obama Hall, a building on the palace grounds that was renamed after the former president’s 2009 visit. A large photo of Obama greeting the chiefs hangs in the lobby.

Mrs. Trump entered the hall following a procession of girls blowing horns. She was escorted to a high-backed chair alongside Osabarimba Kwesi Atta II, chieftain of the Fante tribe, before an audience of fellow tribe members, U.S. Embassy staff and journalists.

He called her “Your Excellency,” and said: “We welcome you to Cape Coast and hope your short stay will be a memorable one.”

Mrs. Trump replied that she was “very honored” to be there, accepting a gift of Kente cloth and slippers as a remembrance of the trip.

Mrs. Trump, who was born in Slovenia, is on her first visit to Africa, with a goal of highlighting child welfare on the continent. Her five-day, four-nation tour will also include stops in Malawi, Kenya and Egypt.