Ex-prosecutors: Trump would’ve been charged if not president

WASHINGTON (AP) — Hundreds of former federal prosecutors have signed onto a letter saying President Donald Trump would have been charged with obstruction of justice if he were anyone other than the president.

The letter was signed by former Justice Department prosecutors who served under both Democratic and Republican administrations, including ex-U.S. attorneys and public corruption trial lawyers. It was released Monday by Protect Democracy, an advocacy group formed two years ago that is routinely critical of the Trump administration.

As of late Monday afternoon, more than 450 ex-prosecutors had signed the letter, which was posted on the website Medium.com. The number of signatories was expected to continue growing.

In the letter, the former prosecutors say special counsel Robert Mueller’s report “describes several acts that satisfy all of the elements for an obstruction charge.” Those actions include Trump’s efforts to have Mueller fired and to conceal it after the fact; his attempts to limit the scope of the Russia investigation; and the president’s tweets and public statements aimed at discouraging aides from cooperating with prosecutors.

“In our system, every accused person is presumed innocent and it is always the government’s burden to prove its case beyond a reasonable doubt,” the letter states. “But, to look at these facts and say that a prosecutor could not probably sustain a conviction for obstruction of justice — the standard set out in Principles of Federal Prosecution — runs counter to logic and our experience.” 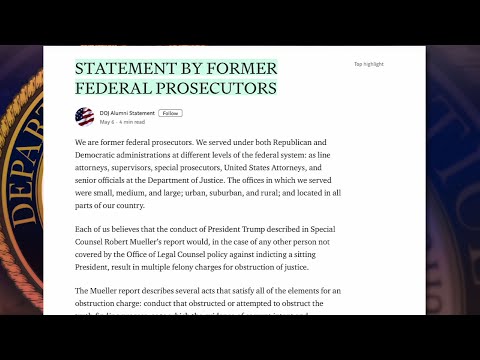 Mueller examined nearly a dozen acts by the president for potential obstruction of justice. He ultimately reached no conclusion on whether Trump had criminally obstructed justice, citing in part an opinion from the department’s Office of Legal Counsel that says a sitting president cannot be indicted.

Attorney General William Barr and Deputy Attorney General Rod Rosenstein then stepped in and determined Mueller’s evidence was insufficient for an obstruction charge. Barr has said the OLC opinion played no role in his conclusion, and Trump has used the attorney general’s finding to claim that the report found no obstruction.

But the ex-prosecutors make clear that in their view the evidence leans heavily in the other direction.

“As former federal prosecutors, we recognize that prosecuting obstruction of justice cases is critical because unchecked obstruction — which allows intentional interference with criminal investigations to go unpunished — puts our whole system of justice at risk,” the letter states.

“We believe strongly that, but for the OLC memo, the overwhelming weight of professional judgment would come down in favor of prosecution for the conduct outlined in the Mueller Report,” it says.