Out of harm’s way: Kids play kickball to escape violence

HOMESTEAD, Fla. (AP) — When Samantha Mitchell punches out of work at a medical clinic, her day is far from over: Kids are waiting in front of their homes for her silver minivan to pull up and drive them to a field.

For the past 11 years, Mitchell and her husband, Leon, have organized kickball games for children in the Miami suburbs of Homestead and Florida City, home to some of the highest-crime neighborhoods in the state.

They started the games as exercise for their own children. As more joined, it blossomed into a free Monday-through-Saturday meetup designed as a safe haven for local children, who are often wary of going outside to play.

The Mitchells, both 35, call the informal program KICKS, or Keeping Inner City Kids Safe. The couple’s reach extends beyond the field: They monitor the kids’ progress in school, organize trips to amusement parks, and host game nights at their home.

“I pray for them all the time,” Mitchell said one recent afternoon as the children played in the distance.

The 2018 National Council for Home Safety and Security report ranked Florida City as the fourth-most-dangerous community in the U.S. Homestead was ranked 41st. Violent crime, poverty, and a lack of affordable afterschool programs mean many children are virtually trapped at home. 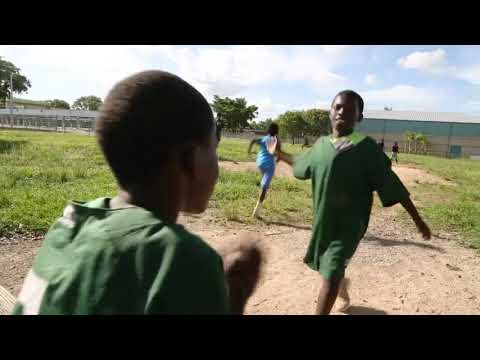 “Their parents don’t trust them outside because it’s not safe to be out there,” Mitchell said.

Courtnee Fields is a 15-year-old high school sophomore who dreams of being a marine biologist. She has joined the kickball game for the past nine years. She grew up a stone’s throw from the field in Homestead public housing. She has neighborhood friends who have been killed in gun violence. At times when she was a child, she was fearful of going outside, even to go to school.

For Fields, kickball has always been an escape.

“It’s like everything from your mind is free,” she said. “You’re thinking of nothing but kickball.”

She said the group is a “second family” and helped shape who she is today. Fields now helps watch over the newest generation of kids.

For the past two years, 34-year-old Shantelle Nichols has sent her four school-age children to play kickball with the Mitchells. She describes raising a family in Florida City as a laborious task filled with anxiety. In May, a 5-year-old and a 9-year-old were hit and wounded in a drive-by shooting while playing in their yard. Nicholls lives a short distance from where the shooting happened.

“You can’t even sit out on your porch without worrying,” she said.

For Nicholls’ children, kickball serves as a refuge from the sirens, the drugs and the violence of their neighborhood.

Her children ran toward Mitchell’s van upon its arrival, wide smiles across their faces. They squeezed inside, finding space to sit between several children from surrounding neighborhoods. The doors shut. The muffled sound of children’s laughter could be heard as the van sped off.

Upon arriving at an overgrown baseball diamond in Homestead, the children jumped out of the van and greeted a group of kids waiting with Mitchell’s husband. They exchanged warm hugs and secret handshakes.

After the excitement died down, the children put on their oversize jerseys. They ran laps, stretched and formed teams, their jerseys billowing out around them.

The competition was fierce. “Come on, bring it on!” yelled 8-year-old Fredrick Little, standing shoeless on a weed-covered mound. He furiously pitched the rubber ball through the dirt and scattered patches of dry grass to Kendalle Conyers, 10, at home plate.

For the rest of the afternoon, the children played underneath the Florida sun. They tactically kicked the ball, causing it to unpredictably bounce and skid across the field. They ran the bases while playfully taunting each other between catches of breath. They played for hours until their skin glistened with sweat and the sun set in fuchsia skies.

There is no formal security for the games, though there is safety in numbers. Still, Mitchell says security is a constant concern. Adults and teens watch over the children, but the neighborhood can be unpredictable. Mitchell said police have advised them on occasion to leave the field during moments of tension.

A day earlier, a car had driven onto the field and struck a bench, knocking off two legs. No one was there at the time. A 17-year-old was slain a block away at the beginning of the year, according to reports from news outlets.

Between games, several children sat on the broken bench and began to ride it like a see-saw.

“That’s what we do,” said Mitchell as she watched them catapult up and down.

“We turn lemons into lemonade.”