Republican leaders had spent months trying to persuade enough Democrats to meet the threshold for an override, and finally seized a moment when most opposing Democrats weren’t at their seats. The few Democrats who were on the House floor moments before the initial 55-9 vote erupted in protest, accusing Republican Speaker Tim Moore of tricking the chamber about the day’s plans.

The override isn’t complete — the Senate still must hold a vote on the issue — but Republicans there need only one Democrat to join them to secure victory. Any Senate absences by Democrats also could make that easier.

“This is a tragedy. This is a travesty of the process and you know it,” Rep. Deb Butler, a New Hanover County Democrat, yelled at Moore just before the vote began. “Mr. Speaker, how dare you, Mr. Speaker!”

Moore told her that he “did not advise that there would be no votes this morning.” Moore’s office provided audio from Tuesday’s floor session from House Rules Committee Chairman David Lewis saying recorded votes would occur Wednesday, specifically identifying two different spending measures. 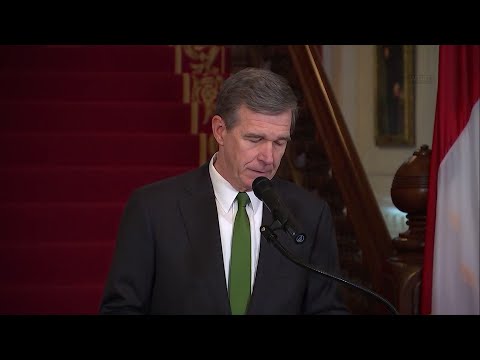 Still, in a fiery early-afternoon news conference, Cooper maintained that Democrats were misled.

Cooper accused Republicans of pulling “their most deceptive stunt yet” at a time of day when many North Carolinians were focused on honoring those killed in the 9/11 attacks. Only one House Democrat has said he was attending a memorial service at the time of the session, however.

The House budget override vote has been on the daily floor calendar since early July, and from time to time the Republican leadership had announced that there would be no recorded votes on certain days. There is nothing in the chamber rules to prevent such action Wednesday.

On Wednesday afternoon, Moore reiterated that there was no scheming to create the opportunity for an override. He noted that he had said ever since Cooper’s budget veto in late June that he would look for ways to get the budget enacted.

“If I see an opportunity to override this budget this veto, I was going to take that vote,” Moore said. “I checked when we came in. Of course, we saw that we had the numbers to do that.”

Minority Leader Darren Jackson said he believed House Rules Committee Chairman David Lewis told him any recorded votes Wednesday would be delayed until the afternoon. Lewis said that wasn’t accurate. He said Moore had the authority to decide.

Wednesday’s dispute marked the latest battle in a decadelong fight between Republicans who took over the General Assembly in 2011 and Democrats whose party had largely controlled state government for more than a century. Democrats have regained some power with Cooper’s election in 2016 and ended the GOP supermajority in the House last year by gaining enough legislative seats to prevent veto overrides when the chamber is full.

The two parties also have battled over redistricting maps that lawmakers this week are now trying to redraw after a court struck down dozens of districts due to extreme Republican bias.

Cooper vetoed the budget on June 28, saying the two-year spending plan lacks Medicaid expansion for hundreds of thousands of low-income adults, contains paltry raises for teachers and unnecessarily gives corporations additional tax reductions. The veto and lack of an override had led to an 11-week budget impasse.

Wednesday’s vote was called quickly, giving dozens of absent Democrats little time to reach the floor. Jackson also said that several Democrats who were on the floor were denied the chance to debate the measure.

Moore “kept talking over us. He turned off our mics,” Rep. Mary Belk, a Mecklenburg County Democrat, said at a news conference. She and others went to other desks to use the microphones. As Butler and others continued to blast Moore’s actions from the floor, the speaker threatened that he could order Butler removed. Several Capitol police officers entered the chamber, and Democratic lawmakers surrounded Butler, who refused to yield.

One Democratic lawmaker took a video of the exchange.

“The unseemly lack of leadership is incredible, absolutely cowardice, childishness,” Butler said as Moore called for an override vote, on a separate Cooper veto, which also succeeded.