NEW DELHI (AP) — India is caught between two calamities — a relentless pandemic that is ravaging the country and a hollowed-out economy that is without precedent.

Restaurants, cinemas and shopping districts are taking teetering steps on the country’s jagged path to recovery, but millions remain jobless. Markets are being thronged with crowds, but many shoppers are not wearing masks. The unemployed are slowly returning to cities to find work, even as hospitals still brim with COVID-19 patients.

That India, the world’s second-most populated country, would have one of world’s highest worst caseloads was always a probability. That’s why India’s initial response had to be big — perhaps even unmatched.

The government’s initial communication was confused and marred by misinformation. Worse, India’s ruling party leaders and its freewheeling news channels, which have long favored Prime Minister Narendra Modi’s Hindu nationalistic policies, found a perfect villain: They blamed Muslims for spreading the virus, leading to an onslaught of online condemnation, physical violence and discrimination.

When Modi ordered the lockdown of the country’s entire population of more than 1.3 billion people on March 24 with just a four hours’ notice, nerves were frayed.

As the clock struck midnight, the 21-day lockdown came into force, eventually stretching to 68 days. Suddenly, a sprawling landscape, where countless millions of destitute citizens live in tightly packed urban areas, came to a grinding halt.

The lockdown, among the world’s strictest, was a seismic cultural shift in a nation that boasts of its community bond. Everyone hunkered down. 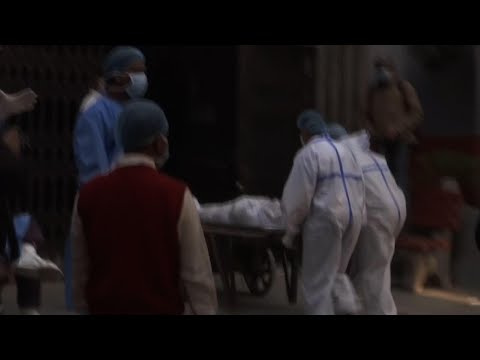 But Modi’s abrupt lockdown caught India’s enormous migrant worker population off guard. Tens of millions of them were stranded in big cities without jobs, food and shelter.

Fearing starvation, whole families packed their pots, pans and blankets into rucksacks and, balancing children on their shoulders, started walking home along highways. It was one of the biggest migrations in India’s modern history. More than a hundred people died of hunger, heat strokes and accidents.

The migration also dragged coronavirus into every corner of India, particularly the vast hinterlands.

But the lockdown slowed the spread of the virus — at least at first. Even as hospitals were overwhelmed in the U.S. and Europe, India’s cases rose at a slow pace.

In May and June, however, those cases started to gradually increase, with megacity Mumbai and the capital New Delhi faring the worst. Social inequalities began to come to the fore. And by July and August, when the country had mostly opened up, India’s virus outbreak was the world’s fastest-growing and infections fast rocketed through its dense slums and urban pockets.

The number of detected cases peaked in September to nearly 100,000 a day and the country’s weakly funded healthcare system struggled to keep up.

New infections have fallen nationwide since then. But as air pollution levels rise and winter digs in after a festive season that spawned fears of a viral resurgence, the latest surge is cresting in New Delhi, where critical care wards are stretched to their limits.

The renewed crisis has underscored what doctors have been warning for weeks: It might not be over yet.

One silver lining: India is home to some of the world’s biggest vaccine-makers and there are five vaccine candidates under different phases of trial in India, though challenges remain. The state-run cold chain facilities, used to keep vaccines consistently refrigerated, will not be adequate for the enormous challenge of rolling out a COVID-19 vaccine.