Victory lap and accolades: Trump has, perhaps, best day ever

WASHINGTON (AP) — He kept up a fist-pumping victory lap over the end of the Mueller probe. Basked in gushy accolades from a foreign leader. Saw a former nemesis humiliated by the feds.

To most of America, it was just another Monday. For President Donald Trump, it was, perhaps, his best day ever.

By any measure it was a good day for Trump. But the president’s hot streak was all the more noticeable given just how many tough days he has had. Since taking office, he’s been dogged by investigations and staff turnover. He has clashed repeatedly with Congress, governed over a deeply divided country and seen huge pushback against his presidency in the midterm elections. 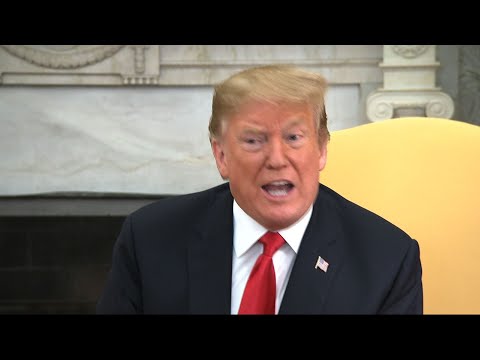 On Monday, though, everything was coming up Trump.

As is his habit, the president woke early and turned to feeding his Twitter account just after 6 a.m. There was no venting or heckling on this particular morning. Instead, he was eager to celebrate on the day after his attorney general issued a summary of special counsel Robert Mueller’s investigation that found Trump’s campaign did not collude with Russia to swing the 2016 presidential campaign in his favor.

After spending nearly two years shadowed by the investigation and uncertain how it would turn out, an elated Trump gleefully tweeted out quotes and headlines from news reports and watched as aides and allies fanned out across cable news to praise the outcome.

Perhaps of particular delight to Trump was a headline that he tweeted from MSNBC, a network he often rails against. His tweet: ”‘Breaking News: Mueller Report Finds No Trump-Russia Conspiracy.’ @MSNBC”

Trump, who has long enjoyed a close bond with Netanyahu, welcomed the Israeli leader on the South Lawn before escorting him to the Diplomatic Room, where the president signed a proclamation recognizing Israel’s sovereignty over the Golan Heights, a reversal of U.S. policy and a political boost for the embattled Netanyahu.

Slathering on the praise, Netanyahu told Trump: “You’ve always been there, including today, and I thank you.”

Netanyahu joked that he’d brought Trump a case “of the finest wine from the Golan.” But he added that Trump, who doesn’t drink alcohol, is “not a great wine drinker” so he would give it to the president’s staff instead.

The day was punctuated by more news that Trump was likely to welcome: As Trump’s meetings with Netanyahu were winding down, word surfaced that Avenatti had been arrested. The outspoken attorney, who no longer represents Stormy Daniels, is charged with trying to extort millions of dollars from Nike and embezzle a client’s money to pay his own expenses.

While the president did not immediately publicly react to Avenatti’s arrest, his eldest son — who had been a frequent target of Avenatti’s barbs — happily jumped into the fray. On Twitter, Donald Trump Jr. said: “Don’t get overconfident guys. Michael Avenatti has @realDonaldTrump right where he wants him.” He added ”#MAGA - aka - Michael Avenatti Got Arrested.”

Trump capped off his day by welcoming the Capitals to the Oval Office, joking back and forth as he sung their praises and reminisced about watching hockey great Bobby Orr play the New York Rangers.

“They’re winners. They know how to win,” Trump said of the Caps.

Standing at the back of the room, watching: Trump’s outside attorneys Rudy Giuliani and Jay Sekulow, celebrating their own win with backslapping and wide grins.

This story has been corrected to show that Trump reminisced about watching Orr play the Rangers, not play with the Rangers.