About that photo: Trump, Pelosi clash amid impeachment

WASHINGTON (AP) — President Donald Trump tweeted it as evidence of House Speaker Nancy Pelosi’s weakness. Pelosi raised it as a banner of strength.

The dramatic official White House photograph shows Pelosi standing and pointing at the seated president across the Cabinet Room table. Although the two are separated by only a few feet, the space illustrated a yawning divide and chronicled in a flash the state of a nation convulsed by impeachment, the prominence of women in politics and the 2020 election.

The reaction to the image, from the top down, also reflected the Rohrschach-type reality that even an image can be narrated in vastly different ways.

“I think it would be interesting, you tell me, if we could have a recording of what goes on” in such meetings, Pelosi told reporters afterward. “We must have been at two different meetings.”

This much is undisputed: Pelosi, second in line to the presidency, was part of a bipartisan delegation of House members and senators who visited the White House on Wednesday to talk about Trump’s widely opposed pullout of U.S. forces from northern Syria, which cleared the way for Turkey’s bloody attack on the region.

Earlier in the day, the House had overwhelmingly voted to oppose the president’s withdrawal, a rare bipartisan rebuke. Also hanging over the meeting, but reportedly not mentioned, was Pelosi’s drive to impeach Trump over his phone call with Ukraine’s president. 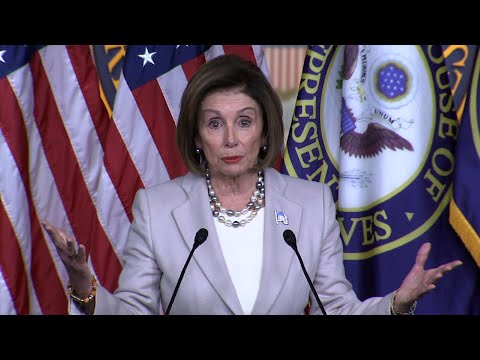 At some point, she pressed Trump on his plans on Syria. He answered by saying he wants to keep America safe, she said. Then Pelosi batted that down as a goal, not a plan. Trump, she said, did not appreciate her questions and ensuing commentary on the consequences of the pullout for Syria and Russian President Vladimir Putin.

The meetup went downhill from there.

The photo shows Pelosi standing, finger pointed at Trump, who is saying something back.

“I think I was excusing myself from the room,” Pelosi said. “At that moment I was probably saying, ’All roads lead to Putin.”

All around them, eyeballs — most belonging to men — are averted. Heads are bowed around the table, including those of Joint Chiefs of Staff Chairman Gen. Mark Milley and House Republican Whip Steve Scalise. House GOP Leader Kevin McCarthy’s eyes are closed. Senate Republican Leader Mitch McConnell is obstructed, but he’s there, leaning back in a blue tie, a few chairs down from Trump.

Pelosi, House Democratic Whip Steny Hoyer and Senate Democratic Leader Charles Schumer walked out, telling reporters in the driveway that Trump had insulted Pelosi. McCarthy later left the meeting, reporting that Pelosi “stormed out of the meeting,” exhibiting “a pattern of behavior.” He said, “This is really not ... how a speaker should carry herself.”

Pelosi posted the image across the top of her Twitter page.

It’s been that kind of year for Trump since Pelosi returned to the speakership after a first stint a decade ago.

In January, she forced Trump to re-open the government after the longest shutdown in history, without the border wall Trump had demanded. She blocked him from delivering the State of the Union in the House chamber until the standoff was resolved. He blocked her from using military aircraft to lead a delegation overseas.

And when the resolution came and Trump mounted the House lectern to deliver the speech, she cast a special kind of shade on him, smirking as she executed a now-famous sideways clap from above and behind Trump.

In May, as special counsel Robert Mueller was wrapping up his investigation of Russia’s election meddling, Trump walked out of a White House meeting with Pelosi on infrastructure spending. She had accused Trump of a “cover-up” that morning, a remark he cited to cut the meeting short.

At one point during the shutdown, Trump reported that Pelosi had told him, “We’re not looking to impeach you.”

That was then, before a transcript and a whistleblower report outlined the president’s own words pressuring Ukraine’s president to investigate the family of Joe Biden.

Now the House is plowing through its impeachment inquiry, something Trump has said makes other legislating impossible. But Pelosi said she pressed ahead anyway on Syria.

“But what it did do,” she told reporters, “was cause a meltdown on the part of the president because he was unhappy with those questions.”