‘Twas the Night before Christmas’ is theme of Pence holiday

WASHINGTON (AP) — Christmas at Vice President Mike Pence’s official residence literally jumps out of the pages of “Twas the Night Before Christmas.”

Every room on the main floor of the Naval Observatory represents a verse from the poem by Clement Clarke Moore, officially titled “A Visit from St. Nicholas.” Pence has a family tradition of reading the holiday classic to his three children every Christmas Eve even though they’re adults now and the gang includes a daughter-in-law.

Stockings hung by the chimney with care? Nine red ones hang from the fireplace mantle in the dining room: Six for the Pences and three for pets Hazel, Harley and Marlon.

Instead of visions of sugar plums dancing in their heads, kids can stop by a special candy station to fill up on them.

The library was transformed into a den for Santa’s reindeer, with all nine names on the wall above a 125-pound gingerbread replica of the observatory. The library has reindeer decorations on the mantle and a tree decorated with reindeer ornaments, a reindeer topper and presents wrapped in reindeer-print paper underneath it.

Wrapped gifts suspended from the foyer mimic presents tumbling down the staircase and straight into Santa’s nearby sack.

“New fallen snow” covers the branches of a tree in the sunroom. 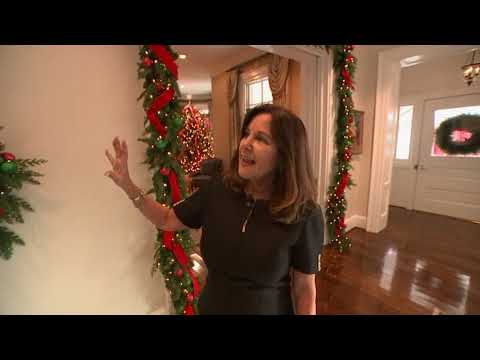 The main attraction shines in the living room: an 11½-foot (3.35-meter) North Carolina fir decorated with ornaments symbolizing the “bundle of toys” Santa “had flung on his back.” A life-size Santa replica stands next to the tree, reviewing his naughty or nice list.

Guests arrive to an oversized copy of the poem opened beside a high-backed red velvet chair.

Her family is spending Christmas in Washington.