MINNEAPOLIS (AP) — A 5-year-old boy plummeted three floors Friday after being pushed or thrown from a balcony at the Mall of America, according to witnesses, and a 24-year-old man with a history of causing disturbances at the mall was in custody.

Bloomington Police Chief Jeffrey Potts said police don’t think there is any relationship between the man and the family of the child, who suffered life-threatening injuries. He was being treated at a hospital, but no details on his condition were immediately available.

Witnesses told police that the child may have been pushed or thrown from the mall’s third level to the first floor, Potts said. He said the suspect immediately took off running but was quickly found and arrested at the mall.

A witness said a woman screamed that her child was thrown from the balcony.

Brian Johnson told WCCO-TV the woman was screaming, “Everybody pray, everybody pray. Oh my God, my baby, someone threw him over the edge.”

Police said Emmanuel Deshawn Aranda, of Minneapolis, was being held on suspicion of attempted homicide.

Aranda’s criminal record includes two convictions in 2015 for obstruction of the legal process/interfering with a peace officer, as well as convictions for fifth-degree assault, trespassing and damage to property. 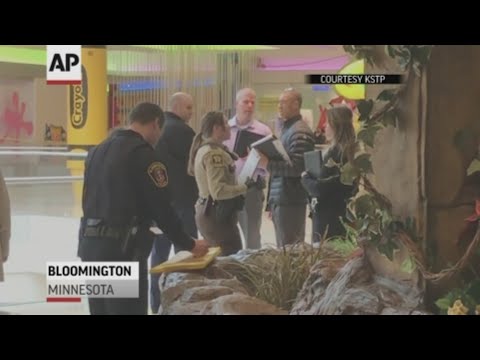 Court records show Aranda was arrested on July 4, 2015, after police said he matched the description of a man throwing things off the upper level of the Mall of America to the lower level. Police say Aranda refused to give his name and resisted arrest. Aranda also was accused of walking into a mall store and sweeping his hand across a display table, breaking glasses.

In October 2015, Aranda was accused of throwing glasses in Twin Cities Grill in the mall. The complaint says Aranda approached a woman who was waiting for the restaurant to open and asked her to buy him something. The woman refused, and Aranda allegedly threw a glass of water in her face and a glass of tea that struck her leg. Aranda was under a trespass notice at the time banning him from the mall until July 4, 2016.

It wasn’t immediately clear if Aranda had an attorney.

Police don’t have an idea about possible motive, Potts said.

“At this point we believe this is an isolated incident,” the chief said. “We’re actively trying to figure out why this occurred.”

No details were immediately available about the child’s condition.

The 4.2-million-square-foot Mall of America is in Bloomington, about 10 miles south of Minneapolis. The mall, which opened in 1992, has more than 520 stores and is visited by 40 million visitors annually, according to its website . Attractions include Nickelodeon Universe indoor amusement park and Sea Life Minnesota Aquarium .

It has occasionally been the scene of crimes or disruptive protests, and the mall’s website touts extensive security training for its officers.

In 2015, the al-Shabab extremist group called for an attack on the Mall of America and other shopping centers in a video. Al-Shabab fighters attacked an upscale Kenyan mall in 2013 in a siege that left 67 people dead. In response, the Mall of America said it was tightening security, and that some of the extra precautions would be noticeable to guests and others would not be.

A Minneapolis man was sentenced to 15 years in prison last year for attacking two brothers at the Macy’s department store at the mall. The man said he was inspired by the Islamic State when he stabbed the brothers in a dressing room area in November 2017.

A teenage brawl erupted at the mall the day after Christmas in 2011. The melee was caught on YouTube, but police concluded the brawl — the worst case of violence at the mall in more than 15 years — was not organized through social media as initially feared. Ten people were arrested for disorderly conduct, including four juveniles.