OLYMPIA, Wash. (AP) — Washington Gov. Jay Inslee said Tuesday evening the state will not be able to lift many of the stay-at-home restrictions implemented to fight the coronavirus by May 4 — the date through which the current directive is currently in place — but he hopes health modeling in the coming days will allow resumption of some activities.

In a televised address, he said a return to public life will take a series of steps and that until several markers are met — including adequate testing and a vaccine — preventing an increase in new cases is the main priority. And he announced a plan to have about 1,500 workers focused solely on contact tracing in place by the second week of May. The effort would involve state employees from the Department of Health, local health jurisdictions, members of the Washington National Guard and volunteer health care providers.

Inslee said the the state health officer believes the spread of COVID-19 is likely declining in Washington state, based on data on hospitalizations, confirmed cases and deaths, but he still urged caution.

“The data tell us that if we were to lift all restrictions right now – or even two weeks from now – this decline would almost certainly stop and the spread of COVID-19 would go up,” he said, adding that “to turn back on this successful temporary approach now would be disastrous.” 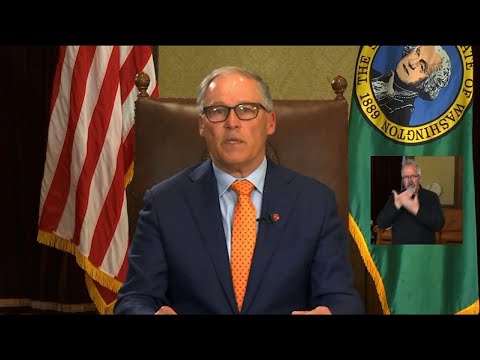 There have been mounting calls for Inslee to ease the state’s stay-at-home order, and a weekend protest drew about 2,500 to Olympia. This week, the sheriff of a county in eastern Washington state told residents that he will not enforce Inslee’s directive or any guidelines “”that infringe on your constitutional rights.″

Inslee said Tuesday if the recent modeling held up, he believed some elective surgeries could soon be allowed to resume, as long as health professionals had the appropriate personal protective equipment. And he also hoped people could resume taking part in outdoor recreation.

The governor also said that he hopes to soon implement a plan that would allow a limited return to residential construction. Inslee’s chief of staff, David Postman, said that it was possible those activities mentioned by the governor could resume before May 5.

Inslee said that until there is a vaccine, workplaces will look different, and that physical distancing at workplaces, teleworking and other measures will continue to be necessary.

He said that the state needs access to more testing supplies in order do widespread testing of everyone with symptoms, isolate those who are infected, and trace and quarantine those who have come in contact with those who are sick.

In a letter to Vice President Mike Pence Tuesday, Inslee called for a national testing system.

“In Washington, we have more lab capacity than we have test kits, a lack of supplies that keep us from getting everyone tested who should be,” Inslee said, saying that in order for the state’s contact tracing plan to work, daily testing needs to increase from about 4,000 a day to between 20,000 and 30,000 tests a day.

The Seattle area saw the nation’s first large COVID-19 outbreak, and so far Washington state has more than 12,280 confirmed cases and at least 682 deaths.

“The reality we need to be aware of is simply this: We are going to have to steel ourselves against this virus for quite some time,” Inslee said. “It is going to affect our daily lives in many ways for months. And we have to be aware that it could come at us in waves.”

Inslee said that he would soon be appointing three leadership groups to advise his office on public health and the health care system, economic recovery, and providing social supports to the those affected by COVID-19.

More than 585,000 people in Washington sought unemployment benefits just last week, with 143,000 people filing claims for the first time as businesses remain closed or with limited operations due to the stay-at-home order.

Also, Boeing this week is restarting production of commercial airplanes in the Seattle area, putting about 27,000 people back to work after operations were halted because of the coronavirus. The company will have employees wear face masks and other protective equipment.

Meanwhile, the commissioners of Franklin County in eastern Washington, along with the county sheriff, are defying Inslee’s stay-at-home order.

The three commissioners voted unanimously on Tuesday that businesses in the county that includes Pasco could reopen immediately, the Tri-City Herald reported.

“As far as I’m concerned the county is open, and I’d encourage people within the law and within the parameters of their own safety — we’re adults, we can make decisions — to behave accordingly. That’s what I’m doing,” said Commissioner Brad Peck.

The commissioners, all Republican, decided to reopen their county one month after Inslee, a Democrat, announced the shutdown in light of the coronavirus pandemic.

Postman, Inslee’s chief of staff, said Tuesday night that the commissioners didn’t have the legal right to do what they did, and that Inslee’s office was preparing a letter in response now.

“Local governments can be stricter than the state if they choose, they can’t be looser,” he said. “The law doesn’t allow it. The order is clearly rooted in statute and constitutional authority, and a county governing body does not have the right, the legal authority in any way, to take a vote and deem something unconstitutional. That’s a role for the courts.”