GOP frowns on, but does not punish, Amash’s impeachment call

WASHINGTON (AP) — Top House Republican Kevin McCarthy pushed back Tuesday against Rep. Justin Amash and his call for President Donald Trump’s impeachment, saying the Michigan Republican is out of step with others in the party and with Americans. But the most conservative group of House Republicans declined to oust Amash from its ranks. And Amash isn’t backing down.

“Their pressure doesn’t have influence on me,” Amash said in a brief interview with The Associated Press. “I really am not concerned about what Kevin McCarthy thinks about it.”

The development came after Amash became the first Republican to call for Trump’s impeachment. On Twitter over the last several days, Amash said special counsel Robert Mueller’s description of the president’s efforts to shut down the probe and get others to lie for him qualifies as obstruction. Republicans were furious, in part because Amash, a libertarian, is a founding member of the conservative House Freedom Caucus and remains in the group even though he hasn’t shown up lately to meetings.

The caucus on Monday voted by a show of hands to condemn Amash’s call for Trump’s impeachment. McCarthy, who on Monday questioned whether Amash is really a part of the House Republican Conference, said Amash was an outlier.

“Mr. Amash always has a different voting record than most of us, anyway,” McCarthy told reporters Tuesday. 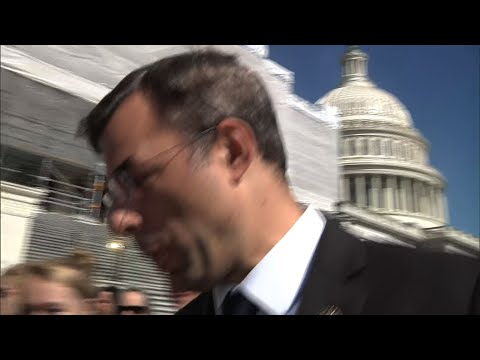 But any impeachment moves would be more than a vote with or against Trump on policy. It would be a formal charge by the House. The Senate would then hold a trial on whether to strip the president of his office.

In calling for Trump’s impeachment, Amash stepped farther even than some Democrats. House Speaker Nancy Pelosi is holding her increasingly restive caucus to a step-by-step process by which the courts and perhaps the House would weigh in on Trump’s lack of cooperation. Multiple committees are investigating Trump’s business dealings and other conduct. Pelosi and her allies say it would take more Republicans than just Amash, plus broad public sentiment, to trigger impeachment proceedings.

“We’ve got to lay the groundwork, lay the framework before you start anything like that,” Dingell said. “Because a partisan impeachment would divide this country further.”