PARIS (AP) — The Latest on President Donald Trump in France (all times local):

President Donald Trump and French President Emmanuel Macron are trying to project unity after Trump lashed out at one of America’s strongest allies in Europe.

Trump had claimed Macron insulted the United States when the French president pushed the idea of the continent having its own defense force.

The American and French leaders have had an up-and-down relationship, but they told reporters that they are good friends as they prepared for talks at the Elysee Palace on Saturday.

The meeting was Trump’s first stop on a weekend trip to Paris where dozens of world leaders are gathering to commemorate Sunday’s 100th anniversary of the end of World War I.

President Donald Trump is being criticized for not finding a way to visit a cemetery in France for Americans killed in World War I.

Trump was to visit the cemetery on Saturday, but the White House canceled the trip because of bad weather, which grounded the presidential helicopter that was to fly him to Belleau, about a two-hour drive east of Paris. The White House sent a delegation that included chief of staff John Kelly in his place.

David Frum, once a speechwriter for President George W. Bush, tweeted that he thought it was “incredible” that a president would travel to France for a WWI ceremony and not pay respects to the U.S. servicemen who died in France during WWI.

Trump is to visit a different cemetery on Sunday. 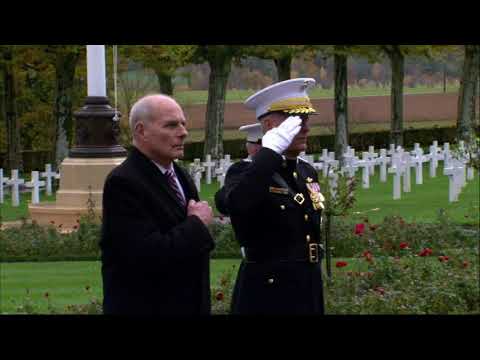 French officials say the Trump administration has agreed to consult with NATO partners on its plan to pull out of a arms control treaty with Russia.

Aides to French President Emmanuel Macron said the decision was made during a meeting between President Donald Trump and Macron in Paris on Saturday.

The White House did not immediately comment. But Trump’s national security adviser, John Bolton, told reporters in Paris on Friday that the U.S. is in “very close consultation” with allies on the treaty issue and are “very optimistic about a common position.”

The U.S. and NATO have accused Russia of violating the Intermediate-Range Nuclear Forces treaty.

Trump’s decision to exit the pact has worried many in Europe, where the treaty is seen as a cornerstone of the post-Cold War era. Macron has warned that if its scrapped and Russia deploys such missiles, they could easily reach Europe but not the U.S.

The White House is calling off President Donald Trump’s scheduled visit to a World War I cemetery due to poor weather.

Trump was slated on Saturday to visit Aisne-Marne American Cemetery near the village of Belleau, France. It’s the site of a 1918 battle in which the American and French repelled German forces. More than 1,800 Americans died there.

The battle looms large in the history of the U.S. Marines Corps. Trump was supposed to participate in a wreath-laying and a moment of silence at the site.

It has been raining in Paris all day and the weather prevented Trump from arriving via helicopter to the site, which is more than 50 miles east of the French capital.

White House chief of staff John Kelly, a retired Marine Corps general, his wife and Secretary of State Mike Pompeo will visit instead.

President Donald Trump is assuring that the United States will “help” with European defense but repeated his insistence that nations on the continent pay their fair share.

Trump and French President Emmanuel Macron met Saturday after a public spat over the French leader’s suggestion that Europe should rely less on the United States.

Trump said that Macron “understands that the United States can only do so much.” But he also made clear that the U.S. was not disengaging, declaring “we want to help.”

Macron has fashioned himself something of a “Trump whisperer” in Europe and has forged a close relationship with the president.

Their meeting Saturday, however, included declarations of friendship but lacked their previous over-the-top displays of warmth.

French President Emmanuel Macron is defending his push for more robust European defense in a meeting with President Donald Trump.

As the two men met at the French presidential palace Saturday, Macron called Trump “my good friend” and even appeared to tap him on the thigh. The two men have had an up-and-down relationship.

Their meeting got off to a tense start after Trump called it “insulting” that Macron wants a European army. Macron defended the idea, saying “It’s unfair to have European security today being assured by the U.S.”

“That’s why I believe we need more European capacities and more defense to take this part of the burden,” he said. He says the states in the U.S. don’t ask France or Germany or other countries to finance their armies.

Trump pulled up in his limousine Saturday at the Élysée Palace where he was greeted by Macron.

The two men briefly shook hands and ignored shouted questions about Trump’s criticism of his French host he delivered as he landed in Paris the night before.

Trump tweeted Friday night that Macron “has just suggested that Europe build its own military in order to protect itself from the U.S., China and Russia. He added that it was “very insulting” to the U.S. and suggested that “Europe should first pay its fair share of NATO.”

Trump is in Paris to celebrate the 100th anniversary of the end of World War I.

Trump tweeted Friday night that Macron “has just suggested that Europe build its own military in order to protect itself from the U.S., China and Russia.” Trump said that was “very insulting” to the U.S. and suggested that “Europe should first pay its fair share of NATO, which the U.S. subsidizes greatly!”

An official in Macron’s office said Saturday that Macron didn’t say that.

The French official, who was not authorized to be publicly named, says Trump lumped together two different comments by the French president.

Macron said in an interview earlier this week that Europe needs to protect itself against “China, Russia and even the United States” in terms of cyberspace. Later, Macron reiterated that Europe needs to build up its own military because it can no longer depend on the U.S. for defense.

The two men are meeting in Paris on Saturday, and Macron’s office says this issue will be on the table.

President Donald Trump is asking if there’s anything better than celebrating the end of a war.

Trump tweeted Saturday that he is in Paris to join other world leaders in marking 100 years since the end of World War I in which millions were killed. The centennial is Sunday.

The president asks on Twitter, “Is there anything better to celebrate than the end of a war, in particular that one, which was one of the bloodiest and worst of all time?”

Trump and first lady Melania Trump will also visit the American cemetery in Belleau, France, on Saturday to pay their respects to U.S. soldiers who died on French soil during the war.

For more information on World War I, go to The Associated Press’ WWI hub: https://www.apnews.com/WorldWarI