Kavanaugh says he ‘might have been too emotional’ at hearing

WASHINGTON (AP) — Supreme Court nominee Brett Kavanaugh acknowledged Thursday he “might have been too emotional” when testifying about sexual misconduct allegations as he made a final bid to win over wavering GOP senators on the eve of a crucial vote to advance his confirmation.

Three GOP senators and one Democrat remain undecided about elevating Kavanaugh to the high court. Two of the Republicans signaled Thursday that they were satisfied with the findings of a confidential new FBI report into the assault allegations, boosting the hopes of GOP leaders.

President Donald Trump rallied behind Kavanaugh during a campaign event in Minnesota Thursday night, telling supporters that the “rage-fueled resistance” to his nominee “is starting to backfire at a level nobody has ever seen before.”

Still, Kavanaugh’s op-ed underscored that his performance at a Senate hearing last week opened new questions about his impartiality and judicial temperament. Democrats say Kavanaugh’s assertion that left-wing groups seeking “revenge on behalf of the Clintons” were behind the misconduct allegations suggests he would rule from the bench with a partisan bent.

In an op-ed Thursday in The Wall Street Journal, Kavanaugh said there were “a few things I should not have said” during the hearing. 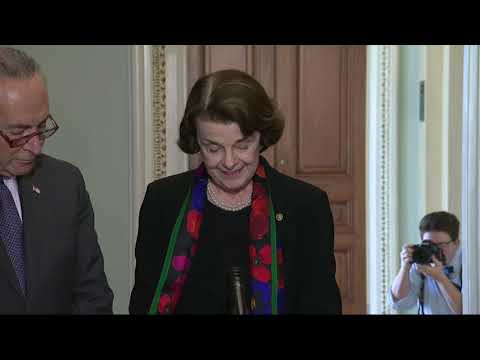 “Going forward, you can count on me to be the same kind of judge and person I have been for my entire 28-year legal career: hardworking, even-keeled, open-minded, independent and dedicated to the Constitution and the public good,” he wrote.

Senate leaders set a pivotal preliminary vote on Kavanaugh’s nomination for 10:30 a.m. Friday. If that succeeds, a final roll call was expected Saturday as the long, emotional battle over the conservative jurist drew toward its climax.

Six days after Trump reluctantly ordered the FBI to scrutinize the accusations— which Kavanaugh has denied — leading GOP lawmakers briefed on the agency’s confidential document all reached the same conclusion: There was no verification of the women’s past claims and nothing new.

Democrats complained that the investigation was shoddy, omitting interviews with numerous potential witnesses, and accused the White House of limiting the FBI’s leeway. Those not interviewed in the reopened background investigation included Kavanaugh himself and Christine Blasey Ford, who ignited the furor by alleging he’d molested her in a locked room at a 1982 high school gathering.

A week after a televised Senate Judiciary Committee hearing at which Kavanaugh and Ford transfixed the nation, the Capitol campus remained a stew of tension as the election-season cliff-hanger neared its conclusion. A hefty police presence added an air of anxiety, as did thousands of noisy anti-Kavanaugh demonstrators who gathered outside the Supreme Court and in Senate office buildings. U.S. Capitol Police said 302 were arrested — among them comedian Amy Schumer, a distant relative of Senate Minority Leader Chuck Schumer, D-N.Y.

“What we know for sure is the FBI report did not corroborate any of the allegations against Judge Kavanaugh,” Senate Majority Leader Mitch McConnell, R-Ky., told reporters about the document, which was sent to Congress overnight. On the Senate floor, he witheringly called the accusations “uncorroborated mud.”

Earlier, Sen. Jeff Flake of Arizona, one of the publicly undecided Republicans, told reporters “we’ve seen no additional corroborating information” about the claims against the 53-year-old conservative jurist and said the investigation had been comprehensive.

A second undeclared Republican, Susan Collins of Maine, also expressed satisfaction with the probe, calling it “a very thorough investigation.” She paid two visits to the off-limits room where the document was being displayed to lawmakers. She told reporters she would not announce her position until Friday.

While GOP leaders were not saying they’d nailed down the support needed, backing from two of those three would ensure Kavanaugh’s confirmation because every other Republican was poised to back him. Republicans have a narrow 51-49 Senate majority, and Vice President Mike Pence will be available to cast a tie-breaking vote.

The trio of GOP moderates, leery of three women’s claims of alcohol-fueled sexual misconduct by Kavanaugh, had refused to let his nomination proceed last week until Trump ordered the FBI probe. The three were briefed together on the investigation in the secure room senators were using to view the report. They skirted reporters for much of the day, sometimes shielded by Capitol Police.

Underscoring the hardening partisan lines, one of the two undecided Democratic senators said she’d oppose Kavanaugh. North Dakota Sen. Heidi Heitkamp, who faces a difficult re-election race next month, cited concerns about his “past conduct” and said she felt his heated attacks on Democrats during last week’s Judiciary Committee hearing raised questions about his “current temperament, honesty and impartiality.”

West Virginia’s Joe Manchin, the other undeclared Democrat, spent time looking at the report and said he would resume reading it Friday.

Sen. Dianne Feinstein of California, the Judiciary Committee’s top Democrat, said while her party had agreed to a week-long FBI probe with a finite scope, “We did not agree that the White House should tie the FBI’s hands.”

Democrats also objected to a statement by committee Chairman Chuck Grassley, R-Iowa, who said the investigation “found no hint of misconduct.” The Judiciary panel’s 10 Democrats said in a statement that based on their briefing and study of the document, “That is not true.”

Grassley also said the FBI could not “locate any third parties who can attest to any of the allegations,” and he said there is “no contemporaneous evidence.”

Neither side specified what they were referring to. Under rules Congress and the White House have used for years, FBI background checks are considered confidential, and lawmakers and aides are not supposed to reveal details.

White House spokesman Raj Shah rebuffed Democrats’ complaints, saying, “What critics want is a never-ending fishing expedition into high school drinking.” He said the FBI reached out to 10 people and interviewed nine, including “several individuals at the request of the Senate, and had a series of follow-up interviews ... following certain leads.”

Senators said the documents they examined totaled about 50 pages. Some said there were notes on interviews with nine people, though others said 10.

Grassley issued another statement around midnight that listed the 10 people interviewed by the FBI, although not all of them were named. Six of the witnesses involved Ford’s claims, including an attorney for one of them, and four were related to Deborah Ramirez, who has asserted that Kavanaugh exposed himself to her when both were Yale freshmen. Grassley said the FBI concluded “there is no collaboration of the allegations made by Dr. Ford or Ms. Ramirez.”

Sen. Bob Corker, R-Tenn., said senators would sit around a rectangular table reading different sections of the report while a committee aide read other parts aloud. Senators were allowed to take notes but not remove them from the room, he said. The chamber, in the Capitol Visitor Center adjacent to the Capitol, is also used for secret intelligence briefings. Some lawmakers said they’d not been able to schedule time in the room until Friday.

Corker said nine of the pages were about Mark Judge, the Kavanaugh friend who Ford said also jumped on her while Kavanaugh assaulted her. Judge has said he doesn’t recall the incident.

While the FBI interviews were to focus on sexual assault allegations, Democrats have also questioned Kavanaugh’s drinking habits during high school and college and dishonest comments they say he has made about his background. Kavanaugh has said stories of his bad behavior while drinking are exaggerated.

Barring leaks, it was unclear how much if any of the FBI report would be made public.