New York’s coronavirus death toll topped 10,000 Monday even as the absence of fresh hot spots in the U.S. or elsewhere in the world yielded a ray of optimism in global efforts against the disease, though a return to normal was unlikely anytime soon.

Officials around the world worried that halting the quarantine and social distancing behaviors could easily reverse hard-earned progress. Still, there were signs countries were looking in that direction.

Spain permitted some workers to return to their jobs and a hard-hit region of Italy loosened its lockdown restrictions. France extended its strict lockdown until May 11, but President Emmanuel Macron noted “hopeful signs” the spread of the virus may be stabilizing.

An online dashboard that tracks the global number of coronavirus cases, maintained by Johns Hopkins University, showed Monday night that the number of cases had surpassed 2 million worldwide. The site was later adjusted to reflect a total of 1.9 million cases. It wasn’t immediately clear why the number changed.

Here are some of AP’s top stories Monday on the world’s coronavirus pandemic. Follow APNews.com/VirusOutbreak for updates through the day and APNews.com/UnderstandingtheOutbreak for stories explaining some of its complexities. 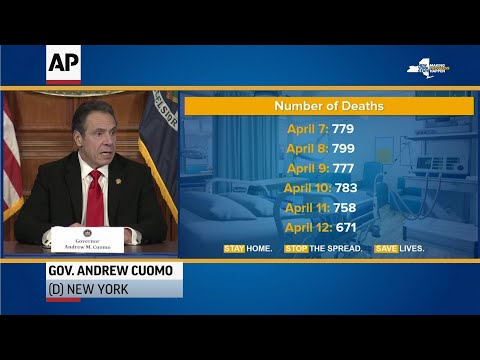 — The coronavirus pandemic has laid bare the human cost of financial inequality in the United States, making it more visible and potentially worse. The disaster that will likely result in a deep recession also raises the question of what happens once life begins to edge back to normal. Economic measures now being taken are only temporary. And for millions of newly unemployed, they may not be enough.

— President Donald Trump asserted Monday that he is the ultimate decision-maker for determining how and when to relax the nation’s social distancing guidelines as he grows anxious to reopen the coronavirus-stricken country as soon as possible. But the Constitution largely gives states the authority to regulate their own affairs and governors in the Northeast and along the West Coast on Monday announced separate state compacts to coordinate. The president repeated his assertion he has “total” authority to reopen the economy at a White House briefing.

— A member of the crew of the coronavirus-infected USS Theodore Roosevelt died Monday of complications related to the disease, 11 days after the aircraft carrier’s captain was fired for pressing his concern that the Navy had done too little to safeguard his crew. The sailor was the first active-duty military member to die of COVID-19.

— Scientists in Brazil have stopped part of a study of a malaria drug touted as a possible coronavirus treatment after heart rhythm problems developed in one-quarter of people given the higher of two doses being tested. Chloroquine and a newer, similar drug called hydroxychloroquine have been pushed by President Donald Trump. But the drugs have long been known to have potentially serious side effects.

— Americans are beginning to see the first economic impact payments hit their bank accounts. The IRS tweeted Saturday it has begun depositing the funds into taxpayers’ accounts and will be working to get them out as fast as possible.

— As countries across Europe have restricted the movement of their citizens, Sweden stands out for what the country’s chief epidemiologist, Anders Tegnell, calls a “low-scale” approach that is “much more sustainable” over a longer period. The softer approach means schools for younger children, restaurants and most businesses remain open, creating the impression that Swedes are living their lives as usual.

— Despite what President Donald Trump repeatedly says, voting fraud is rare. Trump claimed in a tweet Saturday that mail-in voting “increases the risk of crime and VOTER FRAUD!” An AP Fact Check finds some election studies have shown a slightly higher incidence of mail-in voting fraud compared with in-person voting but the overall risk is extremely low.

For most people, the coronavirus causes mild or moderate symptoms, such as fever and cough that clear up in two to three weeks. For some, especially older adults and people with existing health problems, it can cause more severe illness, including pneumonia and death. The vast majority of people recover.

TRACKING THE VIRUS: Drill down and zoom in at the individual county level, and you can access numbers that will show you the situation where you are, and where loved ones or people you’re worried about live.

204: There are 204 days until the U.S. presidential election in November, and with so much uncertainty over the coronavirus outbreak, politics are a long way from getting back to normal.

— TEMPLE ANIMALS: Normally, animals at Nepal’s most revered Hindu temple, Pashupatinath temple in Kathmandu, are fed by thousands of devotees. With a lockdown in place, guards, staff and volunteers are coming out to ensure that the animals survive.