Turkish media, which released surveillance camera video of the men on Wednesday, said they were members of an elite Saudi “assassination squad,” sent to kill Khashoggi, a Saudi critic.

Saudi Arabia remained silent at the accusation as the images were seen around the world, raising pressure on the kingdom to explain what happened to the writer, a critic of Saudi Crown Prince Mohammed bin Salman.

Adding to the macabre mystery, a Turkish official told The Associated Press that one member of the team was an “autopsy expert.”

Saudi Arabia has dismissed allegations it played a role in Khashoggi’s disappearance as “baseless,” but it has offered no evidence to support its contention he left the consulate unharmed last week and vanished into Istanbul while his fiancée, Hatice Cengiz, waited outside.

The video, shown on the state-run broadcaster TRT and others, did not offer definitive proof about Khashoggi’s fate. Turkish officials have said that they fear the team killed him. 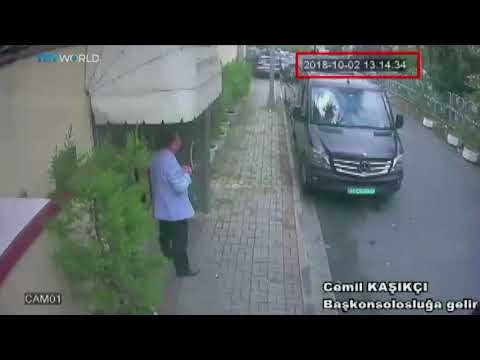 President Donald Trump said the U.S. is “demanding” answers from its close ally, but he did not disclose any details.

The Turkish security camera video was reminiscent of the surveillance video sleuthing done by officials investigating the assassination of a Hamas operative in Dubai in 2010 or the slaying of North Korean leader Kim Jong Un’s half brother in Malaysia in 2017.

The silent video showed one of two private Gulfstream jets that Turkish media said carried the Saudi group, who flew in and out of Istanbul on Oct. 2.

The Sabah newspaper, which is close to Turkish President Recep Tayyip Erdogan, published images of what it referred to as the “assassination squad,” apparently taken at passport control at the airport. The state-run Anadola news agency published the names and birth dates of all 15 Saudis.

The footage shows some of the Saudis leaving a hotel and Khashoggi entering the consulate, walking past a black Mercedes van with diplomatic plates parked adjacent to the entrance. An hour and 54 minutes later, according to the time stamp, a black Mercedes van drives about 2 kilometers (1.2 miles) to the consul’s home, where it was parked in a garage.

The footage all seemed to come from surveillance cameras, which would have been located throughout the neighborhood housing the Saudi Consulate and other diplomatic missions. No footage has emerged of Khashoggi leaving the consulate.

Two Turkish officials, speaking on condition of anonymity to the AP because the investigation into Khashoggi’s disappearance was still ongoing, confirmed the authenticity of the images in the Turkish media. One of the officials describes a member of the Saudi team as an “autopsy expert” amid earlier allegations that Khashoggi had been killed and dismembered.

The Hurriyet newspaper and other media alleged that the Saudi Consulate’s 28 local staff were given the day off Oct. 2 because a “diplomats’ meeting” would be held there on that day. The reports did not cite a source and there was no official confirmation. Turkey’s private NTV news channel identified one of the 15 Saudis who arrived as the head of a Saudi forensic science agency. It alleged that he may have been responsible for cleaning up any incriminating evidence. The station did not cite a source for its report.

Khashoggi had written a series of columns for the Post that were critical of Saudi Arabia’s assertive Prince Mohammed, who has led a widely publicized drive to reform the conservative Sunni monarchy but has also presided over the arrests of activists and businessmen.

Erdogan has not accused Saudi Arabia of being responsible for Khashoggi’s disappearance but has said that if the Saudis have video footage of him leaving the consulate, they should release it. Saudi Arabia is a major investor in Turkey, despite Ankara’s support for the Gulf nation of Qatar, which is under a blockade led by Saudi Arabia and three other Arab nations.

Police and investigators in Turkey typically release video and information through state-run or otherwise government-friendly media outlets, as opposed to holding briefings like those common in Western nations.

On Wednesday, the Post published a column by Cengiz, who said her fiance first visited the consulate on Sept. 28 “despite being somewhat concerned that he could be in danger.” He returned there Oct. 2 after being promised the necessary paperwork so the two could be married.

Trump told reporters that Cengiz will “most likely be coming to the White House. It’s a terrible thing.”

Khashoggi had sought to become a U.S. citizen after living in self-imposed exile since last year, fearing repercussions for his criticism of the prince, Cengiz wrote.

Trump, whose first overseas trip as U.S. president was to the kingdom and whose son-in-law Jared Kushner has close ties to Prince Mohammed, said Tuesday he had not yet talked to the Saudis about Khashoggi, “but I will be at some point.”

Turkish Foreign Ministry spokesman Hami Aksoy said Tuesday that Saudi authorities have notified Ankara that they were “open to cooperation” and would allow the consulate building to be searched. It’s unclear when such a search would take place.

Embassies and consulates under the Vienna Convention are technically foreign soil and must be protected by host nations. Saudi Arabia may have agreed to the search in order to reassure its Western allies and the international community.