FORT LAUDERDALE, Fla. (AP) — A church van packed with children was headed to Walt Disney World when it got caught in a fiery pileup involving two 18-wheelers. Seven people, including five of the youngsters, died in the crash.

On Friday, investigators tried to determine what triggered the accident, which happened outside Gainesville in clear weather on a straight, flat stretch of Interstate 75, a busy highway that connects Florida to the rest of the South.

Two vehicles traveling north — a tractor-trailer and a car — smashed into each other and then burst through a metal guardrail, slamming into another semitrailer and the southbound van carrying the children. Diesel fuel leaked, and the mass erupted into a fireball, the Florida Highway Patrol said.

A fifth car, unable to avoid the chaos, sped through and hit people who were thrown from the van, the highway patrol said. Five of the children from a Pentecostal church in Marksville, Louisiana, and the two truck drivers died. At least eight others were injured, some seriously.

“It is a heartbreaking event,” Lt. Patrick Riordan said Friday. He did not identify the church involved, but a member of the Avoyelles House of Mercy told The Gainesville Sun on Friday that her church was stunned. The children ranged in age from 9 to 14. 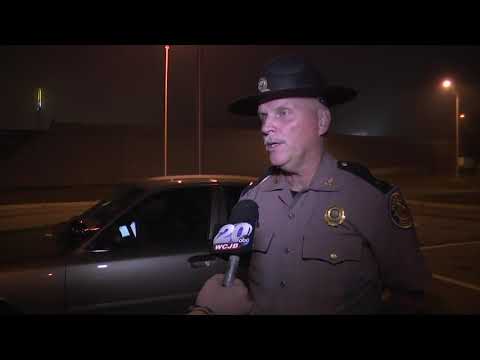 “It’s unbelievable. Everybody is in shock. We lost five of our children,” church member Maxine Doughty said. “We had our Last Supper Sunday, and the pastor said to live our lives like each day is the last day.”

Church officials did not immediately respond to phone calls.

In a statement posted on the United Pentecostal Church International’s Facebook page, Louisiana district superintendent Kevin Cox said a pregnant woman injured in the crash and her unborn child had been stabilized. Cox also said church pastor Eric Descant’s 50-year-old wife, Karen, was critically injured and his granddaughter was among the children killed.

The highway patrol says a truck driven by Steve Holland, 59, of West Palm Beach, was traveling north in the far-right lane when his truck suddenly veered left and collided with a car driven by Robyn Rattray, 41, of Gainesville.

Both the truck and car went out of control and through the center divider, where Holland’s truck plowed into the church van, driven by Amy Joffiron, 49, causing it to flip several times and eject some of the nine children on board. The highway patrol said it is unknown if any were wearing seatbelts.

Holland’s truck then struck a truck driven by Douglas Bolkema, 49, of Albuquerque, New Mexico, who was also traveling south. Both trucks and Rattray’s car caught fire, and a fifth vehicle hit at least one of the ejected van passengers.

Rattray and Joffiron suffered serious injuries, as did the four surviving children, who were also ages 9 to 14. They remain hospitalized, as did Karen Descant.

Authorities identified the dead children as Joel Cloud and Jeremiah Warren, both 14; Cara Descant, 13; Briena Descant, 10; and Cierra Bordelan, 9. The relationship between the Descant girls and the pastor was not immediately available.

Court records show Holland received numerous tickets between 2000 and 2014 in Florida, Pennsylvania, Ohio, Indiana and Virginia for violations such as speeding, driving an unsafe vehicle, driving an overloaded vehicle and not carrying proof of insurance. Bolkema received a ticket in 1997 for following too closely.

Vinnie DeVita said he was driving south and narrowly escaped the crash. He saw it in the rearview mirror, immediately behind him, according to a report by Orlando television station WKMG .

“If I had stepped on the brake when I heard the noise, undoubtedly, I would have been in that accident,” DeVita said. “And then within probably 15 to 20 seconds of it all, it exploded. I mean, just a ball of flames.”

The highway is a busy transportation corridor. Its lanes fill daily with semis that barrel among other vehicles filled with tourists heading to and from Orlando, Tampa and South Florida.

The National Transportation Safety Board would normally send a team to help with the investigation, but cannot because of the federal government shutdown. Riordan said that will not impede the highway patrol’s efforts, which could take months.

Florida Department of Transportation spokesman Troy Roberts said the agency is investigating whether the guardrail should have stopped the northbound crash from crossing the highway or whether the crash was too severe.

“The guardrails are there to stop as much as they can, but there are some things they cannot,” Roberts said.

It was the worst accident on I-75 in Alachua County since January 2012, when 11 people died in a chain-reaction crash attributed to heavy fog and smoke on the road. Officials were criticized for not closing the road because of the conditions. They later installed cameras, sensors and large electronic signs to help prevent similar crashes.

This story has been corrected to show that the injured pregnant woman did not give birth to the baby, as previously indicated in a statement from Cox.