HOUSTON (AP) — The Latest on the remnants of Tropical Storm Imelda (all times local):

A man found dead in his vehicle in southeast Texas after floodwaters receded is at least the fourth person to have died in the aftermath of Tropical Storm Imelda.

Police in Beaumont said the body of 47-year-old Malcolm Foster was found Friday morning in a Toyota Prius that was found in a flooded canal. Authorities say his family was later notified of his death.

Foster is the fourth man to have drowned after Imelda inundated the region this week. Authorities said one of the men also was electrocuted while trying to move his horse to safety Thursday.

Authorities say the remnants of Tropical Storm Imelda have led to the death of a third person.

Harris County Sheriff’s Office spokesman Jason Spencer said Friday that preliminary indications are a man whose body was found in a ditch Friday north of Houston drowned from storm-related flooding.

An autopsy will be performed to confirm the cause of death.

The unidentified man had last been seen walking during severe rainfall that hit the Houston area.

Imelda’s remnants also led to the deaths of two other men on Thursday. A 19-year-old man in Jefferson County drowned and was electrocuted while trying to move his horse to safety. A man in his 40s or 50s drowned when he tried to drive a van through 8-foot-deep floodwaters near Bush Intercontinental Airport in Houston. 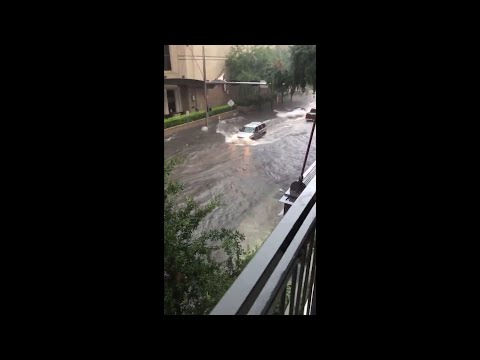 Officials say three bystanders were slightly hurt as a 100-foot (30-meter) section of scaffolding collapsed on a San Antonio street amid 50 mph (80 kph) winds from a system linked to Tropical Storm Imelda.

The street was closed Friday pending removal of the twisted metal.

A major bridge over the San Jacinto River in Texas is shut down after several barges broke loose during strong currents caused by the remnants of Tropical Storm Imelda.

The U.S. Coast Guard says witnesses reported early Friday that nine barges had broken away from their moorings at a shipyard. The Coast Guard says at least two of the barges struck the Interstate 10 bridge over the San Jacinto River at Channelview, about 15 miles (25 kilometers) east of Houston.

Harris County Sheriff Ed Gonzalez says there is possible structural damage to the bridge, and that it won’t reopen until inspections occur.

The slow-churning remnants of Tropical Storm Imelda that flooded parts of Texas left at least two people dead and rescue crews with boats scrambling to reach stranded drivers and families trapped in homes.

Houston Mayor Sylvester Turner said that by Thursday night, floodwaters had started receding in most of the Houston area. Police Chief Art Acevedo said law enforcement officers planned to work well into the night to clear freeways of vehicles stalled and abandoned because of flooding.

Officials in Harris County, which includes Houston, said there had been a combination of at least 1,700 high-water rescues and evacuations to get people to shelter during a relentless downpour that drew comparisons to Hurricane Harvey two years ago.