TOKYO (AP) — Despite scandals, rising costs and doubts about the economic payoff, the Tokyo Olympics will be a must-see event — if you can find a ticket or a hotel room — when they open in a year.

Tokyo was supposed to be a “safe pair of hands” after Rio de Janeiro’s corruption and near-meltdown three years ago.

Mostly, it has been.

Local sponsorship revenue has passed $3 billion, about three times more than any previous games, driven by Japan’s giant advertising and marketing company Dentsu Inc., the exclusive marketing agency for the Tokyo Games caught in a French probe into alleged vote-buying connected with Tokyo winning the 2020 Olympics.

Ticket demand is unprecedented and few Japanese can even get them. Estimates suggest up to 90% of Japan residents who applied were unsuccessful in the first phase of a ticket lottery in June. Tickets prices are sure to soar with scalping a certainty, though Japan just passed a law banning the practice.

“This is probably going to be the most popular Olympics, and possibly one of the most popular events of all time,” Ken Hanscom told The Associated Press. He follows ticketing around the globe as the chief operating officer of Los Angeles-based TicketManager. 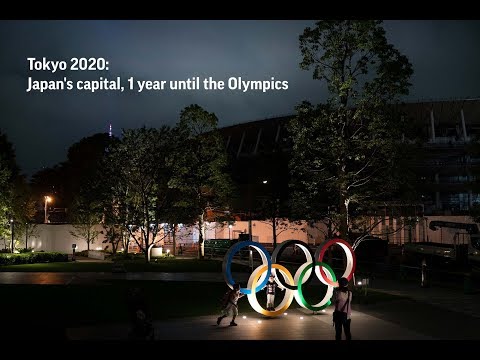 AP Photographer Jae C. Hong discusses Tokyo, one year out from the Olympics.

Roy Tomizawa, a Japanese American who lives in Japan and published the most definitive book on Tokyo’s 1964 Olympics, said he applied for 16 tickets and got zero in the June lottery.

Organizers have quickly thrown together a so-called second-chance lottery in August, and have another lottery set for later in the year. But this will not change the reality: Demand exceeds supply in Japan by at least 10 times. And it’s a similar story for buyers outside Japan.

“I thought that putting myself down for the most expensive tickets would ensure me of winning seats, but that wasn’t the case,” Tomizawa told the AP. “I struck out resoundingly. The high demand appeared to surprise everyone, Japanese and non-Japanese alike.”

Tomizawa, whose father was a producer for NBC News at the ’64 Olympics, said the “measured demeanor” of the Japanese hides their Olympic enthusiasm. There are great expectations. Japan is shooting for a record 30 gold medals, almost twice the previous best of 16 in Tokyo.

This is also the second of three straight Olympics in Asia, another factor driving interest.

And don’t forget: Greater Tokyo has a population of more than 35 million — the world’s largest metropolitan area.

The Olympics will be simply a sideshow for some Tokyo visitors, astounded by the cleanliness, courtesy and order. Japan’s sprawling capital is a dense mix of the traditional and eccentric where bowing meets bustle. Small shrines or temples nestle alongside gleaming towers, passengers wedge silently into commuter trains and pedestrians meander through a labyrinth of alleyways, always lined with places to eat and drink.

“I’ve never, never seen interest in attending the Olympics like I have for Tokyo,” said Greg Harney, who works at Cartan Global, an Authorized Ticket Reseller for much of Latin American and the Caribbean, and is preparing to attend his 19th Olympics.

Tokyo’s 1964 Olympics marked a turning point for Japan, highlighting the country’s recovery just 19 years after World War II. It was the first games in Asia and left behind breathtaking architecture — such as Kenzo Tange’s Yoyogi National Gymnasium and its suspension roof — and showcased dozens of consumer brands that became household names around the world.

Ambitions are more modest this time. Organizers are emphasizing the rebuilding of the Fukushima area northeast of Tokyo, which was devastated by a 2011 earthquake, tsunami and the meltdown of three nuclear reactors. Some baseball and softball is being played there, a gesture to convince the world the area is safe.

Tokyo appears to be a watershed for the International Olympic Committee, which is recasting the Olympics and its bidding process as “cost-sensitive” after years of coaxing cites to splurge on white elephant sports venues. Rio de Janeiro is the last example, still littered three years later with money-sapping arenas, bribery trials and an organizing committee facing bankruptcy.

The IOC already has awarded the next two Summer Olympics to Paris and Los Angeles, cities that promise to control costs and use existing venues.

“The Olympics have become more sponsor- and television-driven,” David Wallechinsky, president of the International Society of Olympic Historians, told the AP. “In Rio it was a mess, yet on television it looked fine. Let’s face it, 99% of the people who follow the Olympics do so on TV. So whatever you present them on TV is reality, though those of us on the ground see a different reality.”

The games will open on July 24, 2020, at the height of Tokyo’s hot, humid summer. Events like the marathon will start just after dawn. Beating the heat is a worry, which it wasn’t in ’64 when the Olympics were held in October. That was before the demands of television.

Tokyo is building eight new venues. The other 35 venues are defined as “temporary” or older buildings being reused, which Tokyo organizers say has saved billions. The centerpiece is the $1.25 billion National Stadium, and the Olympic Village for more than 10,000 athletes on the edge of Tokyo Bay.

The Summer Olympics don’t come cheaply, and even existing venues need renovation when the games come to town. Exact costs — what are, and are not Olympic expenses — are difficult to sort out. But Tokyo is spending at least $20 billion to get ready, 70% of which is taxpayers’ money.

Critics point out that the biggest Olympic sponsor is the Japanese government, which is picking up many of the bills.

IOC President Thomas Bach will be in Tokyo on Wednesday for the one-year countdown ceremony as the gold, silver, and bronze medals are unveiled. A small group called “Hangorin no kai” — roughly translated “No Olympics” — is also scheduling seminars and protests around the date.

Tsunekazu Takeda, the head of the Japanese Olympic Committee, was forced to resign earlier this year when he was implicated in a vote-buying scheme to land the games. He has denied wrongdoing but acknowledged he signed off on about $2 million that French investigators allege went to buy votes of some IOC members.

Yasuhiro Yamashita, who won a judo gold medal in the 1984 Olympics, took over recently for Takeda and acknowledged: “We have seen some scandals in sports, including the JOC. And therefore the trust and confidence is now in question. We have to grapple with these issues very seriously.”

Organizers were also forced to redesign their logo when the original draft faced charges of plagiarism, and an international labor union has alleged work-safety violations at Olympic venues, largely regarding migrant labor.

A futuristic design for the new stadium by the late British architect Zaha Hadid was scrapped when costs soared to $2 billion. Japanese architect Kengo Kuma was chosen instead with a design focused on wood lattice and greenery that will be finished by the end of the year.

Sports economist Rob Baade has written extensively on the Olympics. He says the games have reached an “inflection point” as cities realize they are expensive, the short-term benefits are scant and the long-term payoffs are unclear.

“There are fewer cities and nations wiling to compete in this international auction of the games,” Baade, who teaches at Lake Forest College outside Chicago, told the AP. “And in absence of this, the IOC is not going to be able to wring the kind of concessions from potential host cities that they did before.”