WASHINGTON (AP) — President Donald Trump on Monday used the daily White House briefing to air a taxpayer-funded promotional video praising his own handling of the coronavirus outbreak and slamming his critics and the press.

In a highly unusual move at a briefing meant to inform Americans about the pandemic, the lights in the briefing room dimmed for a video running more than 3 minutes that was a montage of officials offering laudatory comments about the president and of Trump discussing his steps to contain the virus.

“Everything we did was right,” Trump said, complaining at length about negative press coverage. He said of the video, “I’ve think I’ve educated a lot of people as to the press.”

It amounted to a telling demonstration of the president’ growing defensiveness in the face of criticism that the administration should have acted more aggressively and sooner to combat the virus.

Trump also gave Dr. Anthony Fauci, the nation’s top infectious disease expert, a turn at the lectern to defend the president’s response to the crisis. Fauci’s conciliatory remarks came one day after Trump had reacted negatively to the doctor’s comments Sunday about the administration’s handling of the pandemic. Trump on Sunday retweeted a posting that included the hashtag “FireFauci.” 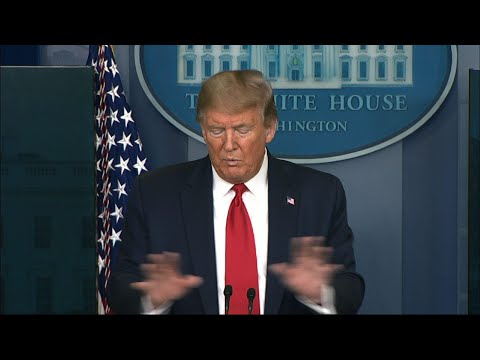 The president sought to persuade the public to look past his comments playing down the threat of the virus and to dismiss comments, including those by Fauci, that more could have been done. He also said he had no plans to fire Fauci.

Trump responded by reposting a tweet that referenced Fauci’s comments and included the line, “Time to #FireFauci,” raising alarms that Trump might consider trying to oust the doctor. Fauci, 79, has served in both Democratic and Republican administrations and has emerged as one of the most recognizable and trusted faces of the federal government’s response.

Fauci said Monday that Trump followed his recommendations to contain the spread of the coronavirus and that the two men were on the same page. He sought to clarify his previous comments, saying that “hypothetical questions sometimes can get you into some difficulty” and that he did not intend to imply “maybe somehow something was at fault here.”

Trump said the video was produced in-house by his social media director, Dan Scavino, and others at taxpayer expense. He said he directed them make the video to keep the press “honest.”

The video juxtaposed early media reports on the virus with a selective account of his administration’s handling of the pandemic, along with praise from some of the nation’s governors, who have been outspoken with their concerns about the pace of the federal response.

Trump acted March 16 to recommend nationwide social distancing measures to slow the spread of the virus, but had spent much of February and early March suggesting the outbreak was well under control and would swiftly pass.

His administration also waited until March to make widespread purchases of protective supplies and needed ventilators. Those were critical days that experts and even some administration officials acknowledged represented a missed opportunity to get ahead of the virus.

Trump defended the pace of his response, saying he couldn’t have issued guidelines that would have had dire economic consequences until the virus began spreading rapidly in the U.S.

“We did the right thing and our timing was very good,” Trump said. The pandemic has infected more than 580,000 Americans and killed more than 23,500 in the U.S.

Fauci said he and Dr. Deborah Birx, who is leading the White House coronavirus response, went to the president twice to discuss strong social distancing guidelines that have led to a dramatic economic shutdown. He said Trump gave his assent both times.

Fauci said that when he and Birx recommended that the country needed another 30 days of social distancing after the initial 15 days: “Obviously, there were people who had a problem with that because of the potential secondary effects. Nonetheless, at that time, the president went with the health recommendation.”

He bristled when asked if he was trying to clarify his comments voluntarily.

“Everything I do is voluntary,” Fauci said with his hands up in the air. “Please, don’t even imply that.”

Asked what mistakes had been made, Fauci focused only on what he personally could have done differently to fight what he called his “worst nightmare.”

“Maybe I should have really tried to delve into that a little bit more,” he said of initial reports out of China that the virus was slow to spread among humans, which later proved to be catastrophically wrong.