EL PASO, Texas (AP) — About 50 shoppers lined up early Thursday ahead of the reopening of a Walmart in El Paso, Texas, that had been closed since August, when a gunman police say was targeting Mexicans opened fire in the store and killed 22 people.

On the day of the attack, Walmart didn’t have a security guard on duty. But as the doors opened to the public for the first time in three months and shoppers streamed into the renovated space, they passed dozens of sheriff’s deputies, security guards and store employees. Workers greeted customers with cheers of “Welcome back to Walmart!”

Walmart has quietly hired off-duty officers at its stores in El Paso, Texas, since Aug. 3, when police say Patrick Crusius drove more than 10 hours from his grandparents’ house in a Dallas suburb to carry out the attack. Crusius, 21, pleaded not guilty.

More than 3,000 people from largely Latino El Paso and neighboring Ciudad Juarez, Mexico, were at the store when the attack happened.

Among the visitors to the reopened store was Eddie Medina, who walked out carrying a frozen turkey and wearing a T-shirt in honor of his wife, Cecy Medina, a Walmart employee who survived the shooting while working in the women’s clothing section. 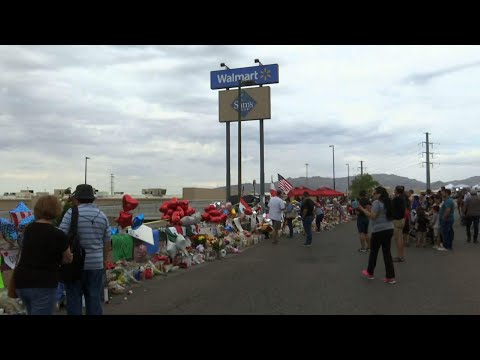 The shirt reads: “My wife is a cancer survivor and a Walmart survivor. She is El Paso Strong.”

Medina, 62, said recent months have been difficult for his wife; her yearlong fight with cancer ended in May, but was followed by her mother’s death and then the shooting. She’s been seeing a psychiatrist paid for by Walmart, but she’s still too traumatized to return to the scene of the crime.

“I told her ‘I’m going to go in your place,’” the husband said. “I just retired last month so I could stay home and take care of her.”

The retail giant reopened the store amid ongoing lawsuits over security on the day of the mass shooting.

The interior of the building was rebuilt after authorities took more than 10 days to finish processing blood and bone fragments in the massive crime scene.

“There was a time that Walmart hired off-duty officers and for some time prior (to) August 3rd that ceased,” El Paso police spokesman Enrique Carrillo said in an email. He declined to provide more details.

When Police Chief Greg Allen first revealed the phasing out of officers during a City Council meeting, council members discussed possibly requiring that off-duty officers be hired at large stores, though the idea hasn’t been implemented.

Instead, Walmart started hiring off-duty officers at their stores throughout the city, from its sprawling Supercenters to its smaller neighborhood grocery stores.

Martin said it’s unclear how long Walmart will continue to employ off-duty officers at every location.

The off-duty officers are paid about $50 per hour, depending on their rank, which is about double the officers’ full-time hourly wage.

Walmart officials declined to discuss the hiring of police officers, the costs, or if the company is taking similar steps in other cities. Company spokeswoman Delia Garcia said additional measures could include hiring security guards or adding cameras inside stores or in parking lots.

“We will continue our long-standing practice of regularly evaluating our staffing, training, procedures, and technology which are designed to provide a safe working and shopping experience,” Garcia said.

John Furner, Walmart CEO for its U.S. business, said on an earnings call with media Thursday that workers at the El Paso store wanted the location reopened “to get back to a normal way of life.”

Some victims are suing Walmart over the lack of security on the day of the attack, arguing that the company’s method of evaluating security boils down to an inadequate algorithm and was wantonly reduced.

Arnulfo Rascón, 56, is one of the plaintiffs. He was shot in the knee and now walks with a cane. The former salesman said he can’t work because of the injury.

Rascón said he expects to receive a letter this month telling him how much money he will receive from the One Fund El Paso, a victim’s relief effort set up after the shooting by a group of El Paso-area nonprofits.

“The whole world promises to help but when the moment comes, they don’t,” he told reporters Wednesday, in Spanish. “My savings are dwindling.”

Construction workers have broken ground on a permanent memorial in the store’s parking lot, a “Grand Candela” that will be about 30 feet (9 meters) tall and could be finished in as little as three weeks.

The reopening of the El Paso store also comes as Walmart has dipped its toe into the gun debate. It posted signage with its new policy discouraging customers from openly carrying guns. But it is not banning them.

This story has been corrected to show the plaintiff who was shot in the knee is called Arnulfo Rascón, not Arnuflo.