“Why didn’t the defendant want to get caught? I submit it was because he knew he was guilty,” Assistant U.S. Attorney Andrea Goldbarg told the jury. “He always had an escape plan in place.”

The defendant, who knew he had been named in a U.S. indictment, had his Sinaloa cartel dig a mile-long (1.6-kilometer-long) tunnel to break him out a Mexican prison in 2014, a stunt showing “just how badly he wanted to avoid being here today,” she added.

The arguments came at a trial where Guzman is facing multiple drug and murder conspiracy charges that could land him in prison for life if he’s convicted. The defense, which was to give its closing on Thursday, insists the defendant’s role in the organization has been embellished, and that the real cartel boss remains on the loose in Mexico.

With Guzman at the defense table with three plainclothes deputy U.S. marshals seated immediately behind him, Goldbarg began her argument by recounting the testimony of a former cartel crony who claimed he witnessed Guzman nearly beat to death two men from Sinaloa after paid-off authorities told him they were working for a rival cartel. The witness said Guzman cursed at the men before shooting them in the head and ordering their bodies thrown on a bonfire. 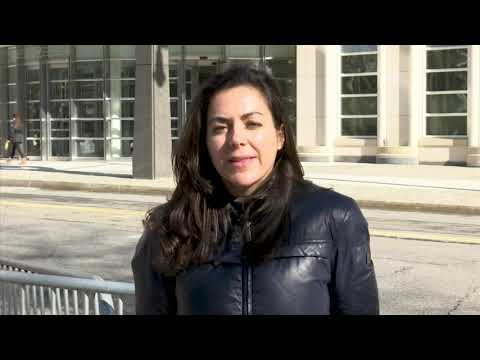 “The cartel’s engines were corruption and violence,” she said. The combination allowed Guzman “to impose his will on anyone who got in his way,” she added.

Goldbarg pointed to an “avalanche” of evidence including testimony from a former Colombian kingpin who said he supplied the cartel and received 55,000 kilograms (121,253 pounds) during the early 2000s with assurances from Guzman that he could get it across the U.S. border faster than anyone.

Of the 14 cooperators who took the witness stand, 11 testified that they took orders from the defendant, she said.

The prosecutor offered snippets of Guzman’s communications so the jury could hear him doing business “in his own words.” In one, he cautioned his father-in-law not to use radios when running drugs at the border because he had been tipped off to eavesdropping by border agents.

“This is the defendant running his empire,” Goldbarg said.

The prosecutors told jurors if they had any doubt Guzman was guilty, they should ask themselves why he acted the way he did: why he had bodyguards, hid out in the Sinaloa mountainside, dug secret trap doors in his safe houses and used spyware on his wife and two girlfriends.

“The questions could go on and on,” Goldbarg said. “The answer is common sense.”