Trump rails against Democratic rivals ahead of Iowa caucuses

DES MOINES, Iowa (AP) — President Donald Trump lashed out at his top Democratic presidential rivals Thursday, taking his fight to the first-in-the-nation caucus state of Iowa and the crucial battleground state of Michigan.

With Democrats set to hold their nominating battle Monday, Trump slammed former Vice President Joe Biden for his small campaign crowds, mocked Bernie Sanders as “Crazy Bernie” and ragged on Pete Buttigieg for his difficult-to-pronounce last name. He also rehashed old grievances and digs at his 2016 Democratic rival, Hillary Clinton, but said the current field of Democratic contenders offers him stiffer competition than the former secretary of state.

“During this campaign season, the good people of Iowa have had a front-row seat to the lunacy and the madness of the totally sick left,” Trump said.

As he often does at his rallies, Trump name-dropped the Green New Deal, a plan introduced by New York Rep. Alexandria Ocasio-Cortez that calls for a drastic drop in greenhouse gas emissions from fossil fuels to curb global warming. But he ratcheted up his fearmongering , warning that Democrats would go after people after they get rid of cows. The plan does not call for getting rid of cows. 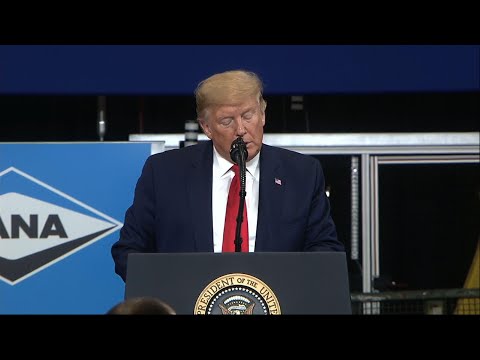 While deriding Democrats and their ideas, he bragged of his own policies, saying, “I think I’m the smartest person.”

Trump also talked up the new U.S. trade agreement with Canada and Mexico in an effort to win over Iowa farmers caught up in his tariff wars and take the focus off his impeachment trial in Washington.

“You’re going to have to get bigger tractors and a hell of a lot more land,” Trump told a packed house at Drake University.

Earlier in the day, Trump addressed workers at a manufacturing plant in Michigan and couldn’t hide his anger over the impeachment trial. He complained that the Senate trial was overshadowing the U.S.-Mexico-Canada Agreement, and he recounted tax cuts and economic gains under his presidency.

“And what do they do? They impeach you. Explain — explain that one,” he said to boos. “But we have great Republicans out there, and they don’t like it any better than you do. A very partisan situation.”

Trump began to grumble that he wasn’t getting enough credit soon after landing in Michigan. He took to Twitter to tout the USMCA as the “BIGGEST TRADE DEAL EVER MADE” but railed that the media “barely mentioned it.”

“For decades, politicians, they campaigned all across Michigan promising to do something about NAFTA — and I call it the NAFTA disaster — only to get elected and do absolutely nothing,” Trump said of the Democrats. He added, “I just want to say I kept my promise.”

But the data show Michigan offers Trump a mixed picture.

Until early last year, Michigan’s factories could be a point of pride for Trump, as the state had added more than 22,000 manufacturing jobs since the start of 2017. But the auto sector began to retool for an era of electronic vehicles last year and layoffs were announced, while the tariffs of the Trump administration and slower global growth created uncertainty for business owners.

Michigan manufacturers shed 5,300 jobs in the 12 months that ended in December, according to the Labor Department. Still, the state overall has posted job growth over the past year.

As the president traveled to Iowa, four of the Democratic contenders looking to replace him have been forced to step off the campaign trail to serve as jurors in Trump’s impeachment trial. Sanders, Elizabeth Warren of Massachusetts, Amy Klobuchar of Minnesota and Michael Bennet of Colorado are among those seeking the Democratic nomination.

Trump also is on the ballot, though he’s not facing serious GOP competition. His campaign views Monday’s Iowa caucuses and the Feb. 11 New Hampshire primary as presenting both a challenge to meet sky-high expectations and an opportunity to flex political strength.

Both Democrats and Republicans would love to win Iowa. President Barack Obama captured the state twice, while Trump brought it back to the GOP in 2016. Democrats made gains there during the 2018 midterms and are hoping to return it — and other crucial Midwestern states — to their column in November.

The campaign is launching an all-out surrogate offensive in Iowa following the Des Moines rally.