PRAYAGRAJ, India (AP) — India’s Hindu nationalist-led government is splashing out on a religious megafest, spending unprecedented sums as part of a strategy to focus on the country’s majority Hindu population ahead of a general election due this year.

Both the central government in New Delhi and the government of Uttar Pradesh — the north Indian state where the Kumbh Mela, or pitcher festival, is taking place beginning this week — are controlled by the Bharatiya Janata Party, which espouses the view that India is a Hindu nation, despite the religious diversity of its 1.3 billion people and the secularism enshrined in its constitution.

The Kumbh Mela is a series of ritual baths by Hindu sadhus, or holy men, and other pilgrims at the confluence of three sacred rivers — the Yamuna, the Ganges and the mythical Saraswati — that dates back to at least medieval times. Pilgrims bathe in the river believing it cleanses them of their sins and ends their process of reincarnation.

The event, which UNESCO added to its list of intangible human heritage in 2017, is the largest congregation of pilgrims on earth. Some 150 million people are expected to attend this year’s Kumbh, which runs through early March. 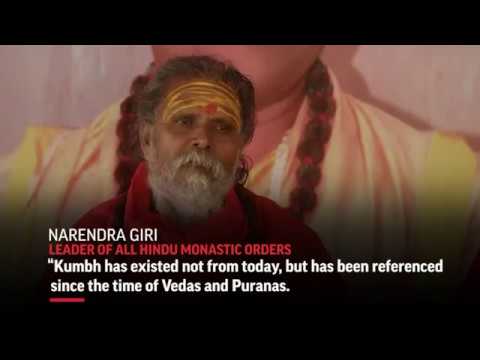 The Kumbh rotates among four pilgrimage sites every three years on a date prescribed by astrology. This year’s festival is of the type that occurs every six years. The BJP-led governments are spending about $650 million, more than triple the public money spent in 2013 on an event that was religiously far more important because it happens only every 12 years.

“The vision of the government was to make sure that the Indian heritage, the Indian culture, the Kumbh heritage which actually personifies what India is, is shown to the entire world,” said Vijay Anand, an Indian civil servant and the head Kumbh official.

At the entrance to the Kumbh, and throughout the 3,200-hectare (7,907-acre) fairgrounds, the faces of Indian Prime Minister Narendra Modi and Uttar Pradesh’s chief minister, Yogi Adityanath, himself a Hindu monk, appear on posters touting government rural electrification projects, stipends for cooking fuel and pipe-borne water.

Kumbh money has been deployed to widen roads, construct a massive temporary city with free tents and portable toilets for pilgrims, monitor more than a thousand CCTVs and construct a new airport terminal, where builders’ scaffolding remained at the beginning of the festival.

It has also been spent on a marketing blitz that included a dramatic, minute-long ad broadcast on CNN, and on a Modi-directed promotional push at India’s 190-plus embassies abroad.

The Uttar Pradesh government directed local administrators to display a new logo with the tagline “Sarvsidhiprad Kumbh,” which in Sanskrit, the language of Hinduism, means “Kumbh is everything,” on publicity materials and on screens at movie theaters after India’s national anthem is played.

In Prayagraj, constant Hindu chants blared over loudspeakers throughout the grounds. The air was thick with smoke from cooking fires, incense and hashish, which sadhus smoke ritualistically.

In time for this year’s Kumbh, Adityanath led the charge to change the city’s Mughal-era name from Allahabad to Prayagraj, part of a BJP Muslim-to-Hindu name-changing effort nationwide to “connect the current generation to our glorious past, and to erase the deep scars of subjugation that have badly injured our cultural psyche,” according to party spokesman G.V.L. Narasimha Rao.

Adityanath’s government also changed the name of Faizabad district to Ayodhya, after the ancient city where Hindus believe the god Ram was born, and has echoed Modi’s 2014 election campaign pledge to build a Ram temple at a site where Hindu hard-liners destroyed a 16th-century mosque in 1992.

The Supreme Court recently assembled a five-justice bench to hear petitions regarding ownership of the disputed site.

India’s government has gradually withdrawn spending for other religious groups, including a subsidy scheme for Haj pilgrims, following a 2012 Supreme Court order that cited an article in the constitution that prohibits “taxes for promotion of any particular religion.”

Dr. Surendra Jain, the international secretary of the Vishwa Hindu Parishad, or World Hindu Organization, a Hindu nationalist group allied with the BJP, downplayed the religious orientation of the Kumbh.

“The Kumbh is a pot which is able to contain many things, so our concept of Kumbh is all-inclusive,” he said, adding that “when Hinduism is promoted, obviously humanity is promoted. The values which we call the ideals of India are the values of Hinduism.”

To be sure, it’s not the first time Indian politicians have capitalized on the Kumbh to invoke their relationship to the country’s Hindu ethos. For years, the central government has given the sadhus a boost.

In 1954, the Congress party-led government injected the Mela with nationalist objectives, timing Republic Day celebrations to take place during the Kumbh and setting up booths on family planning and public health, according to Australian academic Kama Maclean, author of the 2008 book “Pilgrimage and Power.”

When Italian-born Sonia Gandhi, former Congress party Prime Minister Indira Gandhi’s daughter-in-law, entered Indian politics in 2001, newspapers featured photographs of her in a sari wading into the Ganges during the Kumbh, symbolic of her adopted Hindu heritage and the washing away of her foreignness, said political commentator Arati Jerath.

Rahul Gandhi, the Congress party leader and Sonia Gandhi’s son, has been visiting Hindu temples across India in the run-up to the vote, and is planning to take a dip at the Kumbh, party officials have said.

“Obviously the BJP will use this to drum up Hindu support. Congress is trying to move into that space as well, but (the Kumbh) can’t be an election issue because this election is going to be fought on economic grounds,” she said, adding that Indian voters “can tell the difference between a festival and their own economic reality.”

But for some Kumbh pilgrims, Hinduism belongs at the forefront of Indian elections.

“This is a very important fight,” said Reva Goyal, a 49-year-old homemaker from New Delhi. “And in this, politics and religion are mixed. I feel the BJP government has done a lot for us, and should come back into power.”

Narendra Giri, the head sadhu at the Kumbh, said the government’s arrangements and facilities for the religious festival would “obviously affect the election,” and that while previous governments had also adhered to the “guest is a god policy,” the BJP’s performance this year had outdone them all.

This story has been corrected to show that Jawaharlal Nehru was leader in 1954, not Indira Gandhi.