MILWAUKEE (AP) — A white man accused of throwing acid on a Hispanic man’s face once held four hunters at gunpoint on his rural Wisconsin property, an encounter that one of the hunters said Tuesday he still vividly remembers.

The chance encounter with the hunters in 2006 sheds light into the temperament of 61-year-old Clifton A. Blackwell, now accused in a gruesome attack in Milwaukee.

When Blackwell spotted the hunters, he drove over in his tractor and pointed a rifle at the group, telling them to disarm because they had trespassed onto his property in Rusk County, a mostly rural area in northwestern Wisconsin. He then marched them to his house, sat them on a log and demanded money from them and threatened to call the police — all while pointing the rifle in their faces, according to court documents and statements from the hunters.

“He couldn’t miss,” Derrick Schultz, one of the hunters, told The Associated Press Tuesday. ”... I thought he was going to shoot me the whole time ... no questions asked, nothing. Just instant gun. I remember it every time I drive past his house up north.”

Mahud Villalaz, the victim in the acid attack Friday night , said it began when Blackwell approached taking issue with how Villalaz parked his car near a restaurant. Blackwell accused him of being in the country illegally and asked why he was “invading” the U.S., Villalaz said. 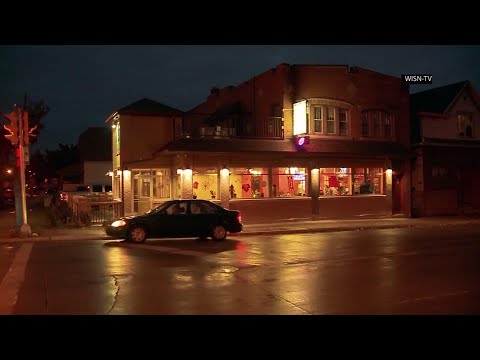 Villalaz, 42, a U.S. citizen who immigrated from Peru, said he moved his car and ignored Blackwell, who was waiting by the restaurant with a container of battery acid when Villalaz returned. The liquid Blackwell threw on Villalaz hit the left side of his face, where he suffered second-degree burns. The attack was recorded by the restaurant’s surveillance camera.

Blackwell is in custody, but charges have not been filed yet. The case is being investigated as a hate crime. The Milwaukee District Attorney’s Office said it’s not unusual for it to take up to five days to formally charge someone in a felony case.

Blackwell’s family said he’s a military veteran who came to Milwaukee to seek help for an undetermined medical issue. His mother, Jacqueline P. Blackwell, of California, told the Journal Sentinel he had sought care with the Department of Veterans Affairs in Milwaukee for post-traumatic stress.

“I was comfortable that he was getting good care with the VA,” she told the newspaper.

His brother, Arthur Eugene Blackwell of Evergreen, Colorado, told the AP that Clifton served nearly four years in the U.S. Marines and was stationed at the Panama Canal around the time Manuel Noriega was captured and removed in 1990. A Marine official told AP that the branch doesn’t have a record matching Blackwell’s name and birthdate.

Schultz, of the four hunters, said he wasn’t surprised Blackwell had been arrested in the Milwaukee acid attack.

“He’s insane,” Schultz said. “He just thinks the world is out to get him and that’s how he was. He’s unstable. I told the DA then if he didn’t put him away he would kill somebody. Now he ruined somebody else’s life.”

In the hunters’ case, court records show Blackwell was ruled not competent to stand trial on May 2008 and was ordered committed. A couple of months later, he was judged competent following examinations by a doctor and a psychologist. Blackwell was eventually convicted of one count of false imprisonment and one count of intentionally pointing a firearm at a person. He was released in 2011 for time served.

One of Blackwell’s neighbors told The Associated Press Blackwell was considered strange but otherwise harmless.

“Everybody has that unique character in their neighborhood and that was him,” said the neighbor, Jesus Martinez, 54. He would walk the street and the alley and stand and watch any activities, but never interact, Martinez said.

“Some of the kids in the neighborhood called him Indiana Jones because he wore a black leather hat like Indiana Jones,” he said.

Martinez recounted one incident when a boy fell off his bike and was injured across from the apartment building. He said Blackwell came out and laid down next to him but didn’t render aid or talk to him.

The attack on Villalaz comes at a time when the Anti-Defamation League says extreme anti-immigrant views have become part of the political mainstream in recent years through sharp rhetoric by anti-immigration groups and politicians, including President Donald Trump.

Blackwell’s political outlook remains a mystery. He’s not currently registered to vote in Wisconsin. He also hasn’t donated to any state political campaigns, according to the Wisconsin Democracy campaign database.

This story has been corrected to reflect the attack occurred Friday night, not Saturday.