WASHINGTON (AP) — President Donald Trump is offering a distorted account of John McCain’s actions in the Russia investigation and trying to blame the media for making him talk about the late senator, despite plain-as-day evidence that he’s assailing McCain without any prodding.

On a recent tear against McCain, Trump also claimed credit for steps aimed at improving health care for veterans and denigrated the senator’s record on the issue. “McCain didn’t get the job done for our great vets,” Trump said. “I got it done.”

In reality, McCain got it done. That is why the law expanding private-sector care for veterans is named, in part, after the Arizona senator, Vietnam War naval aviator and tortured prisoner of war who died in August of brain cancer.

A look at some of Trump’s statements:

TRUMP, asked why he is criticizing a dead senator who can’t defend himself: “When they ask me the question, I answer the question. But you people bring it up. I don’t bring it up.” — Fox Business Network interview, to be broadcast Friday on “Mornings with Maria.”

THE FACTS: This is false. Trump has been assailing McCain without any prompting by the media. He tweeted Sunday about “last in his class” McCain (who wasn’t last in his class), after a tweet Saturday about “stains” on the late senator’s record. 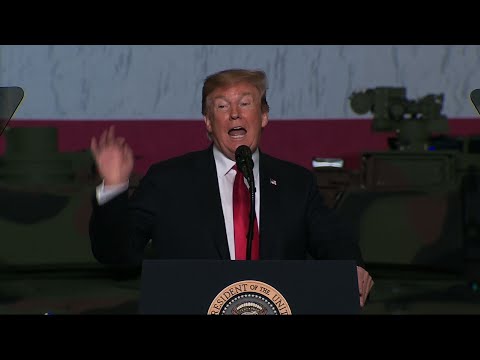 And after extended opening remarks in a speech at a Lima, Ohio, Army tank factory on Wednesday, Trump abruptly segued by telling his audience: “A lot of people are asking, because they love me, and they ask me about a man named John McCain.” He went on to devote nearly 800 words to criticisms of McCain.

Trump further claimed in the Fox Business interview “that when I went out yesterday to the scrum, they asked me the question,” and that’s the only reason he discussed his feelings about McCain. But at that scrum — a gathering of reporters who asked him questions as he was leaving for Ohio — the president didn’t answer any questions about McCain, if any were asked in the din. A day earlier, at the start of Trump’s meeting with Brazilian President Jair Bolsonaro, a reporter asked about his anti-McCain tweets.

TRUMP: “John McCain received a fake and phony dossier. Did you hear about the dossier? It was paid for by Crooked Hillary Clinton. Right? And John McCain got it. He got it. And what did he do? He didn’t call me. He turned it over to the FBI, hoping to put me in jeopardy.” — remarks Wednesday at the Lima, Ohio, tank factory.

TRUMP: “So it was indeed (just proven in court papers) ‘last in his class’ (Annapolis) John McCain that sent the Fake Dossier to the FBI and Media hoping to have it printed BEFORE the Election. He & the Dems, working together, failed (as usual).” — tweet Sunday.

THE FACTS: Trump’s chronology is incorrect. McCain did not present then-FBI Director James Comey with a copy of the memos compiled by former British spy Christopher Steele until December 2016, according to a deposition from a McCain associate, David Kramer. FBI officials had access to Steele’s research on Trump before the election, as they referenced it as part of an application for a secret search warrant of Trump associate Carter Page.

Trump often claims falsely that special counsel Robert Mueller’s Russia probe is based on the dossier. That probe is examining Russian interference in the 2016 U.S. presidential election and possible coordination with the Trump campaign. The FBI’s investigation actually began months before it received the dossier of anti-Trump research financed by the Democratic Party and Clinton’s campaign. The FBI probe’s origins were based on other evidence — not the existence of the dossier.

There is no evidence that McCain provided the dossier to the news media.

And while McCain famously racked up demerits and earned poor grades at the U.S. Naval Academy in Annapolis, Maryland, he ultimately graduated fifth from the bottom of his 1958 class, not last.

TRUMP: “The vets were on my side because I got the job done. I got Choice, and I got accountability. ... For many decades, they couldn’t get it done. It was never done. I got it. Five months ago, I got it done. Choice.” — remarks in Ohio.

THE FACTS: What Trump got done was an expansion of the program achieved by McCain and Sen. Bernie Sanders, most prominent among the lawmakers who advanced the legislation signed by Obama.

McCain was a co-sponsor of the 2014 legislation to overhaul the Department of Veterans Affairs following a scandal at VA’s medical center in Phoenix, where some veterans died while waiting months for appointments for medical care. He was a key negotiator for the legislation establishing the Veterans Choice program, working with Sanders, the co-author of the bill. Sanders was then chairman of the Senate Veterans Affairs Committee.

McCain didn’t rest after the law was enacted. He fought to expand the program and achieved that, too, in his last months.

Congress approved the expansion in May and Trump signed the legislation in June. It’s named after three veterans who served in Congress.

One of them is McCain.

TRUMP: “Instead of waiting in line for two days, two weeks, two months, people waiting on line — they’re not very sick, by the time they see a doctor, they are terminally ill — we give them Choice. If you have to wait for any extended period of time, you go outside, you go to a local doctor, we pay the bill, you get yourself better, go home to your family — and we got it passed. We got it done.” — remarks in Ohio.

THE FACTS: As he does routinely, Trump exaggerated what’s been accomplished with his expansion.

Veterans still must wait for weeks before they can get private care outside the VA system.

The program currently allows veterans to see doctors outside VA if they must wait more than 30 days for an appointment or drive more than 40 miles (65 kilometers) to a VA facility. Under new rules to take effect in June, veterans are to have that option for a private doctor if their VA wait is only 20 days (28 for specialty care) or their drive is only 30 minutes.

But the expanded Choice eligibility may do little to provide immediate help. That’s because veterans often must wait even longer for an appointment in the private sector. Last year, then-Secretary David Shulkin said VA care is “often 40 percent better in terms of wait times” compared with the private sector. In 2018, 34 percent of all VA appointments were with outside physicians, down from 36 percent in 2017.

The VA also must resolve long-term financing because of congressional budget caps after the White House opposed new money to pay for the program. As a result, lawmakers could be forced later this year to limit the program or slash core VA or other domestic programs.

Also key to the program’s success is an overhaul of VA’s electronic medical records to allow seamless sharing of medical records with private physicians, a process expected to take up to 10 years. VA Secretary Robert Wilkie has said full implementation of the expanded Choice program is “years” away.