COLUMBIA, S.C. (AP) — The latest in a long line of what had been unsuccessful Democratic U.S. House challengers in South Carolina’s 1st Congressional District actually made an impression the first time he met the Republican mayor of Folly Beach.

But even with some Republican backing, Mayor Tim Goodwin is surprised his city will be represented by a Democrat for the first time in nearly 40 years after attorney and ocean engineer Joe Cunningham flipped the seat from GOP control in Tuesday’s elections.

Cunningham knew the issues and wanted to protect the beaches and the gentle, salt-water dominated Lowcountry way of life, Goodwin said, recalling that first meeting. But at the time, the mayor backed the incumbent, U.S. Rep. Mark Sanford.

After Sanford was defeated by state Rep. Katie Arrington in the June primary, Goodwin had some thinking to do. Arrington was a full-throated supporter of President Donald Trump and his bare-knuckle divisive politics. She supported offshore drilling and rubbed Goodwin the wrong way by characterizing Democrats as evil.

“Don’t go saying you ought to vote for me because this other guy supports me,” said Goodwin, who appeared with three other local Republican officials in an ad supporting Cunningham. 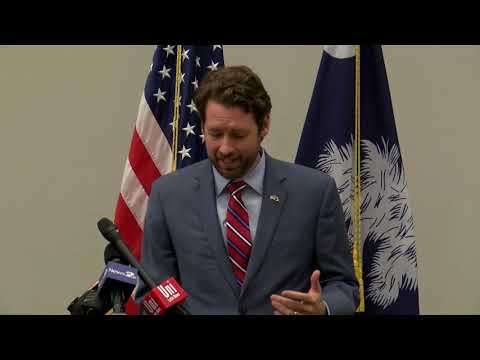 Cunningham defeated Arrington by about 4,000 votes Tuesday, just barely over the 1 percent threshold needed to avoid an automatic recount. On the surface, it was a stunning win. A Democrat last won in the district that stretches from Charleston to Hilton Head Island in 1978.

Trump won the district 54 percent to 40 percent for Hillary Clinton in 2016 — although that was the smallest margin of the six Republican controlled districts in South Carolina. The 1st District is also richer and better educated than most of the state.

Cunningham, 36, followed the old axiom that all politics are local. He hammered Arrington’s support of offshore drilling in the Republican primary even as she tried to walk it back in the general election. He promised he would not support Nancy Pelosi for House speaker from the beginning of his campaign. He said a U.S. Representative needs to represent all the people when Arrington suggested the race was a choice between good and evil.

And Cunningham met people. He tried to talk to every local leader he could, Republican or Democrat. And many of them gave him a chance at least for a little while.

“He seems like an honest, hard-working young man,” Goodwin said. “If not, this is only a two-year stint.”

Cunningham promised to serve no more than three terms and said he would “work across the aisle” at least a half-dozen times at a news conference Wednesday.

“For the people who voted for my opponent, I want you to know my door will always be open and you’ll always have a seat at the table,” Cunningham said.

The table comment referred to Arrington telling a Republican mayor who backed Cunningham that his town would lose its seat at the table if he backed the Democrat. Isle of Palms Mayor Jimmy Carroll taped the conversation and released it to The Post and Courier of Charleston.

Arrington came after Sanford hard in the primary — one ad suggested he needed to spend more time getting things done than going on CNN and bashing Trump. It ended with a swipe about Sanford leaving South Carolina while governor in 2009 to meet a woman for an affair in Argentina. He told no one where he was going, and his in-the-dark staff suggested he might be hiking the Appalachian Trail.

“Bless his heart. But it’s time for Mark Sanford to take a hike — for real this time,” Arrington said in her ad .

Arrington, 47, spoke to reporters Wednesday morning in the same hotel where 12 hours before she told supporters that she was only 30 minutes from winning. She conceded to Cunningham and wished him luck.

“I’m not going anywhere. This is just a break in time,” said Arrington, who also left no question where she thought who was to blame for her loss.

“We lost because Mark Sanford could not understand this was about the conservative movement and not him,” Arrington said, telling any true conservatives who donated to Sanford they should ask for their money back.

Sanford told The Associated Press that Arrington missed how important the environment was to voters and that the people in the district embracing everything Trump did were a minority, albeit a loud one.

“It wasn’t by accident I was speaking out against the president prior to the primary because it’s what I was hearing from the voter,” Sanford said.

Sanford didn’t endorse Arrington, a decision that Cunningham spun in his favor. But Sanford rarely endorses in races and there is no evidence Arrington sought out his help.

“I think it’s natural to want to blame someone or something for any loss, in life,” Sanford said.

Follow Jeffrey Collins at https://twitter.com/JSCollinsAP . Read his work at https://apnews.com/search/jeffrey%20collins