SAN MARTIN, EL Salvador (AP) — Julia Pérez makes a living selling pupusas, traditional Salvadoran stuffed pastries, to residents of the Altavista neighborhood who rise before dawn and rush to buses bound for their jobs in the capital about 12 miles (20 kilometers) away.

One of her regulars was Óscar Alberto Martínez Ramírez, who would arrive on his motorcycle with his toddler daughter, Valeria, to grab a quick bite or pick up the savory treats to go.

That is until they drowned this week in each other’s arms while trying to cross the Rio Grande into Texas, a tragedy captured in a heartbreaking photograph that has prompted an outpouring of grief from around the globe.

“It shocked me. I broke out in tears when I found out,” Pérez said. “I saw the images and I didn’t know it was them, how sad to see that. Later I learned it was little Oscar and Valeria.”

The neighborhood left behind by Martínez and his family is a humble bedroom community where many people commute to nearby San Salvador, leaving behind only the elderly and the very young during the day. The notorious 18th Street gang is present there, though residents say violence and extortion has eased.

But there’s still poverty and a lack of jobs, and a local priest estimates that a third his parishioners have left the country since 2015, risking the dangerous trek north toward the United States. 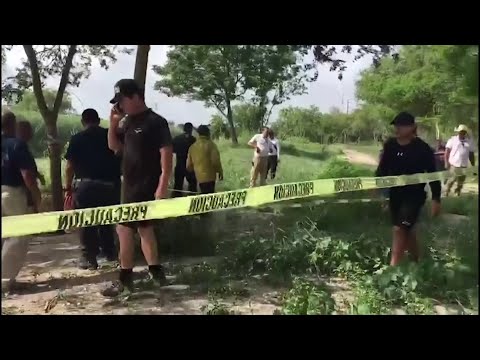 “This reality of migration is not an unknown thing to us in Altavista,” the Rev. Manuel Lozano said. “We all have lots of people who have left. ... We would rather that nobody put themselves in danger, but people continue to tell us, ‘I have to leave, I have to go.’”

“I have seen entire families leave,” Lozano said. “The most recent was 14 people, a single family, that emigrated to the United States, and then the young people, many are leaving and the great majority exposing themselves to danger.”

Altavista is home to an estimated 130,000 people and sprawls across three municipalities, including San Martin. Most people live in low-rise, two-bedroom homes with a combination kitchen-living room-dining room, worth about $10,000-$15,000 each.

At first light people can be seen walking briskly on the streets so as not to be late for jobs elsewhere, some of them holding the hands of children on their way to school.

“Here in Altavista, as I think in the rest of El Salvador, live hard-working people, people with dreams, people who are mostly workers. ... People who like almost all Salvadorans live with a bit of paranoia, concerned by insecurity,” Lozano said.

But in Altavista things have been relatively quiet of late. Several people confirmed that gangsters are around, but residents largely feel free to go about their lives and business untroubled.

José Ovidio Lara, 23, who each day parks his bike at a corner with a basket of French bread for sale, said he’s never been bothered, not even for the “protection” fees gangs commonly demand from business owners upon threat of death.

“No, they’ve never asked me,” Ovidio said, “and nor do I have anything to give them.”

“This place was terrible before, but today one lives at peace,” agreed Pérez, who has run her pupusa business for 15 years, opening at 5 a.m. and closing at 11 p.m. “I would be lying if I told you the gangs mess with me. No, they don’t charge me rent.”

Even if things were calm, Martínez, 25, and his 21-year-old wife Tania Vanessa Ávalos, who had been living with his mother, apparently felt that on their salaries working at a pizza parlor and as a restaurant cashier they would never be able to own one of those modest homes.

It was that dream, to save up money for a home, that led the family to set out April 3 bound for the United States, according to Martínez’s mother, Rosa Ramírez.

The young family arrived at the Mexican border city of Matamoros over the weekend and went to the downtown bridge that leads to Brownsville, Texas.

There, Xiomara Mejia, a migrant from Honduras, explained that the newcomers would not be able to add their names to the long list of families waiting to apply for asylum in the United States until Monday.

“I noticed they were really nervous, scared. There was panic on their faces,” said Mejia, who arrived with her husband and three children on May 8 and was still waiting to file an asylum application with the U.S. government.

“They said to me, ‘You haven’t tried to cross the river?’” Mejia said. “We said to them, ‘No,’ because of the children more than anything. I don’t know how to swim and my kids do, but either way I’m not going to risk it.”

After chatting, Martínez and Ávalos said they would come back Monday.

“I didn’t think they were going to decide to cross the river,” Mejia said.

But on Sunday, not far downriver from that bridge, the family crossed a popular bike and jogging path and walked down a slope through the brush to the edge of the Rio Grande.

The river does not appear wide there, maybe 20 to 30 yards, but that short distance obscures the dangers posed by the swift-moving current.

Martínez made the crossing first with Valeria, then left her on the riverbank while he returned for his wife. But the frightened little girl plunged into the river after him and as he struggled to save her, they both were carried away by the fast-moving waters.

Their bodies were recovered early Monday and were expected to be returned to El Salvador accompanied by Ávalos.

Migration activists worry people may be driven to more risky measures by recent U.S. policies, including “metering” that dramatically reduces the numbers allowed to apply for refuge, and others that send asylum-seekers back to Mexico to wait as their cases linger for months or even longer through a backlogged U.S. immigration court system.

Mexico has also stepped up immigration enforcement under pressure from Washington.

President Andrés Manuel López Obrador said Thursday that Mexico had a three-month deadline to get the flow of Central American migrants under control and that the country is making progress.

“We think we are going to be able to moderate the migratory phenomenon. We have to,” López Obrador said. “We have a deadline, which is three months, ending Sept. 10, but we are doing well.”