NASHVILLE, Tenn. (AP) — Keith Whitley seemed destined to become a country star with his haunting, soulful baritone honed by his roots in Kentucky bluegrass. But his life was cut tragically short when he died of alcohol poisoning in 1989 at the age of 33 when his addiction finally overcame him.

Thirty years after his death, the Country Music Hall of Fame and Museum is marking his indelible legacy with an exhibit and a concert featuring Garth Brooks, Trisha Yearwood, Tracy Lawrence and more.

The exhibit, which opens Friday and runs until April 2020, is the first to focus solely on the Sandy Hook, Kentucky singer whose No. 1 country hits include “When You Say Nothing At All,” ″I’m No Stranger to the Rain” and “Don’t Close Your Eyes.” The concert will be held at the Hall of Fame on May 9 — the anniversary of Whitley’s death.

His widow, country singer Lorrie Morgan, brought their children and grandchildren to see the exhibit firsthand, from the fringed leather jackets he liked to wear to his favorite guitar. Morgan said that while she’s glad to see him finally get recognized, she felt sad that he wasn’t here to see the impact his music had.

“It is a sad story,” Morgan told The Associated Press. “This is not a fairytale ending.”

They were married in 1986, and their son Jesse Keith Whitley was born shortly after. Whitley adopted Morgan’s daughter from a previous relationship. 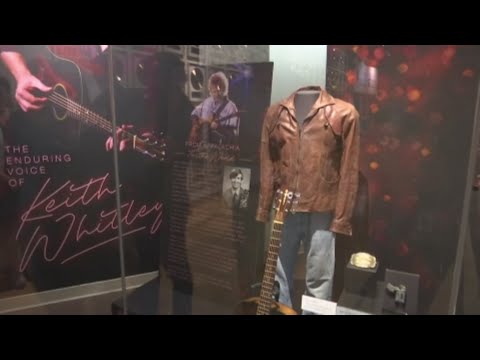 Whitley tried to get sober and Morgan tried to help, writing in her 1997 autobiography that she would tie their legs together in bed to keep him from sneaking out of bed to drink.

“What I hope people take away is the struggles that Keith had to live his dream,” Morgan said.

Although he only released two solo albums prior to his death and another two albums posthumously, Whitley led the way for the new traditionalist movement in country music in the early ’90s that included Brooks, Clint Black, Randy Travis and more.

His son Jesse Keith Whitley, now 31, will also be singing during the concert. He said the title of the exhibit, “Still Rings True,” is a perfect description of his father’s music.

“People still get chills all the time listening to those records,” Jesse Keith Whitley said.

Whitley’s death hit the country music community hard. Brooks included Whitley in his music video for “The Dance” and Vince Gill added a reference to Whitley in his now classic song, “Go Rest High on That Mountain.”

Brooks often cites Whitley as an influence, saying he was “my generation’s George Jones.” He said the exhibit is a first step to getting Whitley forever enshrined in the Hall of Fame as a member.