The Latest: McConnell says no GOP senator for Sessions’ job

Some of Trump’s allies have suggested he will replace Sessions, whom he has repeatedly criticized, after the midterm elections. Sen. Lindsey Graham has been the subject of speculation about the job, but Graham said this week he has no interest.

In an interview with The Associated Press Wednesday, McConnell said any replacement to Sessions is “not going to come from our caucus, I can tell you that.” 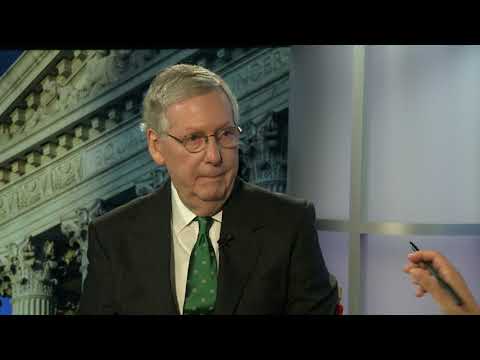 House Speaker Paul Ryan has promised a “big fight” over the U.S.-Mexico border wall, and McConnell did not shy away from a partisan battle over wall spending.

But McConnell suggested in an Associated Press interview Wednesday any shutdown would be modest because Congress already has provided yearlong funding for about 75 percent of federal operations.

Trump wants three times the $1.6 billion the Senate is considering for the wall in a bill funding the Department of Homeland Security. McConnell says Republicans will try to help Trump “get what he’s looking for.”

On the campaign trail Trump insisted Mexico would pay for the wall. Mexico has refused.

Senate Majority Leader Mitch McConnell is warning Republicans considering challenging President Donald Trump in 2020 that it would be “a waste of time.”

The Kentucky Republican told The Associated Press in an interview Wednesday that that it would be “very, very difficult to unseat the president in the primary.”

Republicans, such as retiring Sen. Jeff Flake of Arizona, are considering challenging Trump in 2020.

McConnell said that “would be a waste of time frankly. But the people who would be likely to challenge the president would not be coming to me for advice.”

In an interview with The Associated Press, the Kentucky Republican cited the Trump administration’s “extraordinary” success with the GOP-controlled Congress — including a growing economy, two new Supreme Court justices and congressional action to cut regulations and taxes.

McConnell said he “generally” declines reporters’ requests for him to critique “on a daily basis” the president’s broadsides of political opponents and the FBI, along with Trump’s most incendiary comments about women, immigrants and other groups of Americans.

Senate Majority Leader Mitch McConnell is warning Democrats to think carefully about “presidential harassment” if they win the majority of the House.

The Kentucky Republican told The Associated Press in an interview Wednesday that Democratic threats to investigate President Donald Trump’s finances and businesses would “help the president get re-elected” in 2020.

He recalled how Republicans were enthusiastic about going after President Bill Clinton in the 1990s. The GOP-led House impeached Clinton but the Senate acquitted him. The public was not as supportive as Republicans had hoped.

McConnell says ’It worked exactly the opposite. The public got mad at us and felt sympathy for President Clinton.”

McConnell added that “this business of presidential harassment may or may not quite be the winner they think it is.”

McConnell told The Associated Press on Wednesday the gender gap “clearly is wider than it used to be.” But he says the controversy over Kavanaugh could end up helping Republicans by generating more enthusiasm among GOP voters who feel he was mistreated.

Kavanaugh was accused of sexual misconduct in high school and college. He denied the allegations.

McConnell says he thinks the Kavanaugh fight contributed to Republican voters “getting more interested” in the midterm elections.

Beside the gender gap, McConnell says Republicans “also had an enthusiasm gap.” He says “the controversy ironically produced an adrenaline shot” among Republicans.

Kavanaugh was confirmed on a 50-48 vote.

Senate Majority Leader Mitch McConnell has declined to blame Democratic Sen. Dianne Feinstein (FYN’-styn) for the initial public disclosure of a woman’s sexual assault accusation against Judge Brett Kavanaugh before he was confirmed to the Supreme Court.

Ford had asked for confidentiality in a letter to Feinstein. Other Republican senators and President Donald Trump have suggested Feinstein’s office is responsible for leaking Ford’s story.

But McConnell emphasized Wednesday in an interview with The Associated Press he hasn’t criticized Feinstein’s handling of the matter. Still, the Kentucky Republican says the disclosure was “clearly an example of others using” Ford.

McConnell told The Associated Press in an interview Wednesday that “She’s certainly going to recover.” He pointed out that Murkowski won election as a write-in vote in 2010. “She’s about as strong as you can possibly be in Alaska. Nobody’s going to beat her,” he said.

Murkowski bucked her party and voted against advancing Kavanaugh’s nomination. She voted “present” in the actual confirmation vote.

Kavanaugh had been accused of sexual misconduct in high school and college. Kavanaugh strongly denied the allegations and is now on the Supreme Court.