NASHVILLE, Tenn. (AP) — Singer-songwriter Allison Moorer has long been hesitant to talk about the deaths of her parents when she was just 14, but it was no secret. The murder-suicide in 1986 was something Moorer and her older sister, Grammy-winning singer Shelby Lynne, avoided questions about their entire careers.

“Every editor, every journalist was told, ‘Just don’t ask her about it,’” Moorer said. “Well, of course that was what they all wanted to know.”

Then in 2010, Moorer was interviewed by poet Maya Angelou and the topic came up. Moorer, who had just given birth to her son, John Henry, gave her a standard response that stuck to the facts, but glossed over the details.

Angelou’s response was, “Yeah, but what are you gonna tell John Henry when he’s old enough to ask?” Moorer recalled.

That prompted her to start a different kind of writing. It’s taken her years to write “Blood,” a memoir out on Tuesday with a companion album of the same name, to finally address the family’s tragic, dark secrets.

“I needed a larger form to tell the story,” Moorer said.

“Blood” is a lyrical, poetic and haunting story of the girls’ childhoods in rural Alabama and of their parents Vernon and Laura Lynn, whose stories encompass much more than the way they died. Her father was an alcoholic and physically abusive to both his wife and his children. Their mother tried to leave him and protect her children, but from an early age, Moorer seemed to know that it would end in tragedy. 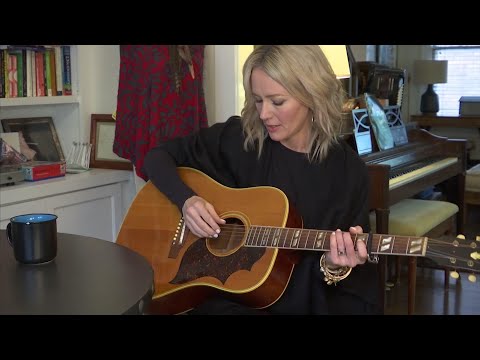 Moorer, who earned a master’s degree while writing the book, dug through family pictures, recordings, lyrics, letters and even autopsy notes that spurred what she called active remembering.

“It’s surprising how much we keep buried,” Moorer said. “There were points during the writing of the book where I would literally hold onto my desk because I would be overwhelmed.”

Moorer split up the narrative into three parts, first dealing with her parents’ fractured relationship, her father’s violent fits of rage and her mother’s natural musical voice. Then Moorer reflected inward on how the two sisters dealt with the shame and abuse in different ways — both forever psychologically scarred at such a young age.

“I realized that when you are raised in an addictive household, you’re taught, or are told either directly or indirectly to deny what you see, what you hear,” Moorer said. “And most heartbreakingly what you feel. Because nobody’s supposed to talk about Daddy’s drinking.”

The album came much quicker as she realized that she had been trying to tell parts of her family’s story in song before, but it never felt complete. The album includes a song called “Cold Cold Earth,” that she initially recorded in 2000 in an attempt to address all those reporters’ questions. “Nightlight” is her ode to her older sister when she reached out for comfort as a scared little girl.

Lynne wrote the forward to the book, saying it “exemplifies how two sisters can face the most horrific situations and come out not only surviving them, but finding each other as women now.”

One song on the album was written by her father, who wanted to be a songwriter and instilled in his daughters’ their earliest musical lessons.

“I’m the One to Blame” was written well before either Moorer or her sister was born and the lyrics were found inside his old briefcase. Moorer sings the lyrics about jealousy and pride, sorrow and blame in a true act of sympathy for a father who caused so much multi-generational wreckage.

Moorer acknowledges that memories can be flawed, especially in traumatic situations, and so her story is told in non-chronological vignettes. Moorer accepts that there will be gaps in memory, or facets of her mother’s life that she never knew and will always wonder about. The final section deals with the healing that came many years later, as Moorer became a mother, and learned how reconcile their family’s legacy.

Moorer said she’ll never fully understand why her parents died, but she feels like she did her best at telling the story of her family that’s so much more than just the facts.

“I still have so many questions about what happened and who my parents were,” Moorer said. “I lived with them for a very short time. So I can’t close it. But I can make peace with the fact that I can’t close it.”