North Korean leader Kim Jong Un and South Korean President Moon Jae-in have visited a crater lake atop a volcano considered sacred in North Korea on the last day of Moon’s visit for summit talks on the nuclear standoff and other inter-Korean affairs.

Dressed in long black coats and accompanied by their wives, Kim and Moon raised their grasped hands while posing in front of the lake at Mount Paektu on Thursday. The leaders rode together in a cable car to reach the lake.

Moon says relations between the rivals should improve so that more South Koreans can visit the volcano. Kim say Mount Paektu has become a “subject of yearning” for South Koreans and Koreans living abroad.

Moon plans to return to the South later on Thursday.

A stone marker commemorating South Korean President Moon Jae-in’s visit to Pyongyang has the wrong dates carved on it.

The stone was unveiled during a tree-planting ceremony attended by Moon and senior North Korean official Choe Ryong Hae on Wednesday.

Moon plans to return to South Korea on Thursday, or Sept. 20. Moon’s office says North Korean workers made a mistake. 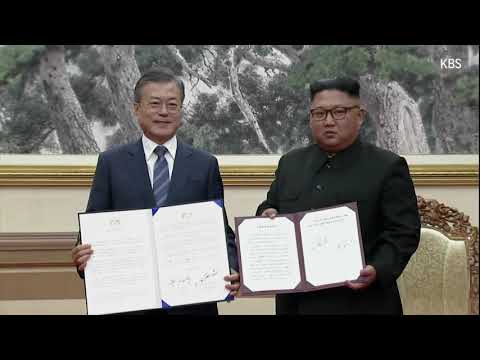 South Korean officials said Thursday that Moon traveled by plane to an airport near Mount Paektu where Kim arrived first to greet him. They then rode vehicles to the mountain on the North Korean-Chinese border.

Moon plans to return to South Korea later on Thursday.

The volcano topped with a deep crater lake is at the heart of North Korea’s foundation mythology and used to legitimize the Kim family’s dynastic rule.

Members of the Kim family are referred to as sharing the “Paektu Bloodline.” The mountain is also emblazoned on the national emblem and lends its name to everything from rockets to power stations.

South Korean President Moon Jae-in has delivered a speech to a massive North Korean crowd gathered for mass games, calling for the rival Koreas to end seven decades of hostility and build a future of peace and prosperity.

Moon, North Korean leader Kim Jong Un and their wives attended the performance of “The Glorious Country” at Pyongyang’s May Day Stadium on Wednesday night where they observed thousands of performers working in precise unison. South Korea says the mass games drew about 150,000 spectators.

Moon said in his speech: “We have lived together for 5,000 years and lived in separation for 70 years. I now propose that we completely eliminate the hostility of the past 70 years and take a big step forward in peace so that we can become one again.”

Historians say the 5,000-year timeline of Korean history is a groundless claim that became part of South Korea’s official narrative after being inserted in school textbooks during the rule of former dictator Chun Doo-hwan.

President Donald Trump says “we’re making tremendous progress” with North Korea, after an inter-Korean summit offered some apparent concessions from the North on its weapons program.

Trump told reporters Wednesday that “we had very good news” out of the summit, where leader Kim Jong Un promised to dismantle a rocket launch site and also agreed to dismantle its main nuclear site if the U.S. takes unspecified corresponding measures.

Trump didn’t indicate in his brief remarks whether the U.S. would be willing to take further steps to encourage North Korean action on denuclearization. However, he claimed credit for quelling the tensions that had escalated sharply during the first year of his presidency before his own summit with Kim in June.

North Korea has conducted no nuclear and missile tests since late last year.

China has welcomed the outcome of the inter-Korean summit and will continue supporting both sides in further talks on reducing tensions.

China is North Korea’s most important ally and has long called on its fellow communist neighbor to work toward disarmament and turn its focus to economic development. China hosted long-stalled six-nation denuclearization talks and insists that its interests be respected in any long-term settlement.

It has also strongly objected to South Korea’s deployment of an advanced U.S. missile defense system that bolsters Washington’s military presence in Northeast Asia, saying it threatens China’s security. Any move to reduce the North Korean missile threat may give it hope that the system could one day be removed.

The volcano topped with a deep crater lake is at the heart of North Korea’s foundation mythology used to legitimize the Kim family’s dynastic rule.

Members of the Kim family are referred to as sharing the “Paektu Bloodline.” The mountain on the North Korean-Chinese border is also emblazoned on the country’s national emblem and lends its name to everything from rockets to power stations.

According to the official narrative, Kim Il Sung saved the Korean Peninsula with daring guerrilla raids against Japanese invaders from his base on the slopes of Paektu. South Korean historians say the tale is exaggerated.

At a joint Korean summit Wednesday in Pyongyang, the North agreed to permanently dismantle a missile engine test site and a launch pad and to take further steps such as permanently dismantling its main Nyongbyon nuclear complex if the United States takes corresponding measures.

“Kim Jong Un has agreed to allow Nuclear inspections, subject to final negotiations, and to permanently dismantle a test site and launch pad in the presence of international experts. In the meantime there will be no Rocket or Nuclear testing,” Trump said in a pair of tweets. “Hero remains to continue being returned home to the United States. Also, North and South Korea will file a joint bid to host the 2032 Olympics. Very exciting!”

North and South Korea have agreed to disarm a jointly controlled border village, starting with the removal of land mines.

A joint statement signed by the countries’ military chiefs on Wednesday said the Koreas will aim to remove the mines in the Joint Security Area in the truce village of Panmunjom within October and also remove guard posts from the area.

The statement says the Koreas agreed to jointly verify the results of such steps and also allow tourists and observers to move freely within the JSA.

North and South Korea have agreed to make their first joint searches for the remains of their soldiers killed during the 1950-53 Korean War.

A joint statement signed by their defense chiefs in Pyongyang on Wednesday says the Koreas will first remove land mines and other explosives in a central area of their border before starting the searches next April.

It says the area they plan to search is where one of the fiercest battles happened during the war.

The statement says the joint searches would be the first of their kind since the end of the Korean War.

The statement was signed while the leaders of the two Koreas were present after their summit in Pyongyang.

A joint statement says the two Koreas agreed to establish buffer zones along their land and sea borders to reduce military tensions and prevent accidental clashes.

The statement signed by the countries’ defense chiefs also says the Koreas agreed to withdraw 11 guard posts from the Demilitarized Zone by December with the aim of removing them eventually.

The statement says the Koreas also agreed to no-fly zone above the military demarcation line that bisects the two Koreas that will apply to planes, helicopters and drones.

Seoul has been stressing the importance of reducing the conventional military threat between the Korea to prevent accidental clashes that can escalate into a nuclear conflict.

South Korean President Moon Jae-in says the Koreas have agreed to establish a joint military committee to evaluate how to reduce tensions and maintain communication to defuse crises and prevent accidental clashes.

Moon said Wednesday the plans for the committee are part of a commitment to remove “any threat that could cause war” on the Korean Peninsula. He was speaking following the Pyongyang summit with North Korean leader Kim Jong Un.

Moon’s government has been stressing the importance of reducing the conventional military threat between the Korea to prevent accidental clashes that can escalate into a nuclear conflict.

The Koreas first agreed to form a joint military committee in 1991, but the plans weren’t carried out due to turbulent relations between the rivals.

A Joint statement says the two Koreas have agreed to seek to obtain the rights to co-host the 2032 Summer Olympics.

The statement was released by Seoul on Wednesday after a Pyongyang summit between South Korean President Moon Jae-in and North Korean leader Kim Jong Un.

It says the two leaders also agreed to cooperate in major sports events such as the 2020 Summer Olympics. It didn’t elaborate.

It says the two leaders have also agreed on a Pyongyang art troupe visiting Seoul for performances in October.

A joint statement released by Seoul shows North Korean leader Kim Jong Un has promised to visit Seoul “in the near future.”

South Korean President Moon Jae-in is in Pyongyang this week for a summit with Kim.

If realized, he would be the first North Korean leader to visit Seoul since the peninsula was divided into North and South at the end of World War II in 1945.

Kim’s late father, Kim Jong Il, had promised reciprocal visits when South Korean leaders visited him in Pyongyang in 2000 and 2007. But his Seoul trip wasn’t realized before his 2011 death.

South Korean President Moon Jae-in says North Korean leader Kim Jong Un has agreed to permanently dismantle a missile engine test site and a launch pad in the presence of international experts in what he described as a specific step toward denuclearization.

Moon also said on Wednesday that the North agreed to take further steps such as permanently dismantling its main Nyongbyon nuclear complex if the United States takes corresponding measures.

Moon and Kim spoke at a news conference after signing a joint statement following their second day of summit talks in Pyongyang.