WASHINGTON (AP) — More Republicans are urging President Donald Trump to halt his attacks on the late Sen. John McCain. But Trump is continuing to complain about the Arizona senator’s health care vote seven months after McCain died of brain cancer.

“I’m not a fan of John McCain,” Trump said again Thursday in an interview taped for Fox Business Network’s “Mornings With Maria.”

Two Republicans on Thursday added their voices to a growing chorus calling for Trump to knock it off.

“I do not appreciate his tweets. John McCain was a dear friend of mine,” Sen. Joni Ernst of Iowa, a member of the Republican leadership and a veteran, said at a town hall meeting Thursday, according to video posted by the Des Moines Register. “No, I don’t agree with President Trump. And he does need to stop that.”

Trump has stuck to his suggestion that McCain, a prisoner of war in Vietnam, was not a hero because he was captured. And the president can’t seem to forget McCain’s decisive thumbs-down that sank the GOP effort to repeal President Barack Obama’s health care law.

“He was horrible what he did with repeal and replace. What he did to the Republican Party, and to the nation, and to sick people that could have had great health care, was not good,” Trump said in Thursday’s interview, blaming the media for asking about McCain. In fact, Trump himself tweeted about the late Arizona senator, apparently without provocation, over the weekend. 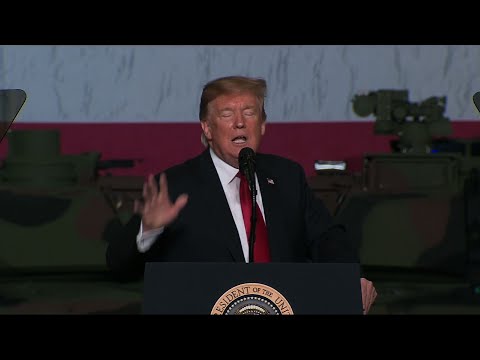 A few Republicans, such as Sen. Mitt Romney of Utah, objected. Then Trump on Wednesday fired back at an official event in Lima, Ohio.

“I gave him the kind of funeral that he wanted, which, as president, I had to approve. I don’t care about this. I didn’t get ‘thank you,’ he told his supporters. “That’s okay. We sent him on the way. But I wasn’t a fan of John McCain.”

There wasn’t much reaction from the crowd to Trump’s references to McCain’s funeral . The president wrapped up the remarks after five minutes with an acknowledgement that his opinion of the late senator isn’t shared by all Republicans. “Some people like him, and I think that’s great.”

In fact, McCain’s family made clear that Trump was not welcome during the weeklong, cross-country ceremonies that the senator had planned himself. Instead, McCain invited former Presidents George W. Bush, who defeated McCain during the 2000 GOP nomination fight, and Barack Obama, who defeated him in 2008, to deliver eulogies on the value of pursuing goals greater than oneself. Trump signed off on the military transport of McCain’s body, went golfing and was uncharacteristically quiet on Twitter during the Washington events.

Trump’s publicly nursed grudge against McCain has not appeared to alienate core supporters, some of whom had soured on the senator by the time of his death. Aware of this, GOP lawmakers until now have stayed subdued or silent though Trump sometimes infuriated them with his comments on their late colleague.

McCain’s family and other allies have ripped Trump for keeping up the commentary.

“We only said goodbye to him almost 7 months ago,” McCain’s daughter, Bridget, tweeted to Trump on Thursday. “Even if you were invited to my dad’s funeral, you would have only wanted to be there for the credit and not for any condolences. Unfortunately, you could not be counted on to be courteous, as you are a child in the most important role the world knows.”

Trump has said for years that he doesn’t think McCain is a hero because the senator was captured in Vietnam. McCain was tortured and held prisoner for more than five years.

The president has never served in the military and obtained a series of deferments to avoid going to Vietnam, including one attained with a physician’s letter stating that he suffered from bone spurs in his feet.

After the health care vote in 2017, Trump was furious, and it showed in the days after McCain’s Aug. 25 death. The administration lowered the American flag over the White House to half-staff when McCain died on a Saturday, but then raised it by Monday. After public outcry, the White House flags were again lowered.

Trump’s relentless new targeting of the deceased senator seemed to cross a boundary for several Republicans.

McConnell called McCain “a rare patriot and genuine American hero in the Senate.” McConnell tweeted, “His memory continues to remind me every day that our nation is sustained by the sacrifices of heroes.”

The Kentucky Republican, who is up for re-election next year, never mentioned Trump, but others weren’t so shy.

“It will (be) deplorable seven months from now if he says it again,” Isakson said on Georgia Public Broadcasting’s “Political Rewind” radio show, “and I will continue to speak out.”

“John McCain is an American hero and I am thankful for his life of service and legacy to our country and Arizona,” she tweeted Wednesday. “Everyone should give him and his family the respect, admiration, and peace they deserve.”

Associated Press writers Lisa Mascaro and Catherine Lucey in Washington and Bill Barrow in Atlanta contributed to this report.