The Latest: Biden: Charlottesville was epiphany on 2020 run

Former Vice President Joe Biden says the events in Charlottesville were an “epiphany” to him because he had never seen anything like it in his lifetime.

Video of Biden’s remarks on Thursday evening at a fundraiser in Philadelphia were obtained by The Associated Press from attendees. Biden announced earlier in the day that he was running for president and said President Donald Trump’s “moral equivalence” between white supremacists and counter protesters was a major motivating factor.

The former vice president made frequent mention of Trump at the fundraiser, saying, “Every nation is held up by an invisible moral fabric, and it’s being shredded, and our kids are listening.”

He says he hopes in a few years people will realize that the Trump era was “an aberration in American history” ″because this is not who we are.”

Reid, a Democrat, said Thursday that he is remaining neutral until after the caucuses in his home state of Nevada on Feb. 22. 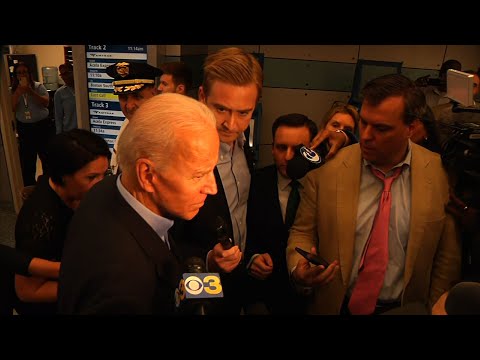 But that didn’t stop Reid from praising the 76-year-old former senator from Delaware and vice president during a call with reporters. Reid said he thinks Biden “can succeed in the Democratic Party of today.”

Asked if he encouraged Biden to run, Reid said, “I certainly didn’t discourage him.”

But Reid also spoke warmly of another contender, South Bend, Indiana, Mayor Pete Buttigieg (BOO’-tuh-juhj). He noted that the 37-year-old Buttigieg might be young and the mayor of a modest-sized city but added: “This is an era in which we should not discount anyone.”

Anita Hill says a conversation she had with former Vice President Joe Biden this month left her feeling “deeply unsatisfied.” She says she’s unconvinced that he accepts the harm he caused her when he presided over a congressional hearing during Clarence Thomas’ Supreme Court confirmation process.

In an interview with The New York Times published Thursday, Hill said: “I cannot be satisfied by simply saying I’m sorry for what happened to you. I will be satisfied when I know there is real change and real accountability and real purpose.”

Hill says she cannot support Biden until he takes responsibility for his actions. She also said she is “troubled” by allegations that he touched women in overaffectionate ways that made them uncomfortable.

Biden was chairman of the Senate Judiciary Committee during Hill’s 1991 hearing, where she testified Thomas had sexually harassed her. Biden has said he wishes he could have avoided questioning by some male lawmakers that he called “hostile and insulting.”

Bernie Sanders’ campaign is raising money off Joe Biden’s announcement that he is entering the 2020 Democratic presidential race.

In an email with the subject line “Joe Biden,” Sanders’ campaign manager Faiz Shakir called Thursday “an important moment to show that we are the ones who can beat Trump and transform this country.”

Shakir says that while there are many candidates running for president, “there is only one Bernie Sanders.”

Sanders is so far Biden’s leading rival in the race for the Democratic nomination, and the senator from Vermont was able to generate more than $6 million in his campaign’s first 24 hours, as did former Texas Rep. Beto O’Rourke. Their big first 24-hour fundraising hauls will be the metric against which Biden’s first day total will be measured.

The former Texas congressman told reporters during a campaign stop in Reno, Nevada, on Thursday that Biden brings “some extraordinary experience in public service” to the competition for the party’s 2020 presidential nomination. He said it’s good for Democrats and good for America.

O’Rourke says Biden is joining an “extraordinary field of candidates with amazing diversity and backgrounds,” experience and life stories.

He said after a speech to the University of Nevada Young Democrats at a coffee shop on the edge of the Reno campus that it’s up to voters, not to him, to decide whether Biden should be considered the front-runner in the race or whether he’s too much of a centrist candidate.

A top aide to Joe Biden says the former vice president has spoken with Anita Hill, whose treatment during Clarence Thomas’ Supreme Court confirmation hearing has been a source of criticism for the 2020 Democratic presidential candidate.

In a text message Thursday to The Associated Press, Biden’s deputy campaign manager Kate Bedingfield says, “They had a private discussion where he shared with her directly his regret for what she endured and his admiration for everything she has done to change the culture around sexual harassment in this country.”

Biden was chairman of the Senate Judiciary Committee in 1991, when Hill came forward with allegations that Thomas had sexually harassed her.

Hill has not responded to multiple requests for comment by the AP.

Biden has said he wishes he could have avoided what he called questioning that was “hostile and insulting.”

The Democratic Louisiana congressman told The Associated Press on Thursday that he encouraged Biden to run soon after President Donald Trump’s 2016 election.

Richmond said he called Biden and urged him to run. He said Biden is “genuinely concerned about where we’re going as a country. I think that played a large role in his decision.”

Ahead of his decision to enter the race, Biden has leaned heavily on Congressional Black Caucus members, who represent millions of black voters in early primary states.

Former Vice President Joe Biden has dismissed a reporter’s question about why he wasn’t endorsed for 2020 by former President Barack Obama, who issued a statement calling his choice of Biden as a running mate in 2008 “one of the best decisions” he’s ever made.

Biden arrived in Wilmington, Delaware, on Thursday to a crowd of reporters anxious to talk to him after he announced his candidacy for the 2020 Democratic presidential nomination.

At a train station en route to Philadelphia, Biden said he “asked President Obama not to endorse” and “Whoever wins this nomination should win it on their own merit.”

Asked what separates him from the rest of the massive Democratic field, Biden said, “That will be for the Democrats to decide.”

Before walking away, Biden cheerily says, “Welcome to Delaware.”

Biden has said the “soul of this nation” is at stake if President Donald Trump wins re-election.

Biden is scheduled to begin in Pittsburgh, the working class heart of his childhood home state of Pennsylvania. He’ll receive the endorsement of the International Association of Fire Fighters and speak about rebuilding the middle class.

Then it’s off to Iowa, home of the leadoff nominating caucuses. That will be followed by a trip to South Carolina, where Biden is seen as having to do well among the state’s sizable blocs of African American voters and military veterans.

Biden is scheduled to visit other early-voting states Nevada and New Hampshire in early May, before holding a national event in Philadelphia on May 18.

Biden joined the crowded Democratic presidential contest on Thursday, declaring the “soul of this nation” at stake if President Donald Trump wins re-election.

Former Vice President Joe Biden is running into immediate headwinds from some progressive Democrats from the party’s left wing as he launches his 2020 presidential bid.

A group aligned with New York Rep. Alexandria Ocasio-Cortez called Justice Democrats says in a lengthy statement that Biden is a centrist Democrat who could “divide the party.” It says Biden could squelch progressive enthusiasm for policies like single-payer health care and a Green New Deal.

The group said Thursday the “old guard” already failed to defeat President Donald Trump in 2016 and cannot be counted on to excite the base in 2020. But the statement still notes that Justice Democrats will support whoever wins the Democratic nomination next year.

Biden joined the crowded Democratic presidential contest on Thursday morning, declaring the “soul of this nation” at stake if Trump wins re-election.

President Donald Trump is welcoming former Vice President Joe Biden to the 2020 race with a taste of his acerbic Twitter commentary.

Trump tweets Thursday: “Welcome to the race Sleepy Joe,” one of his nicknames for Biden, a fellow septuagenarian. He adds: “I only hope you have the intelligence, long in doubt, to wage a successful primary campaign.”

Trump predicts that the race to face him in the general election will be “nasty” but says if Biden wins the nomination, “I will see you at the Starting Gate!”

Biden formally announced his candidacy on Thursday, entering the crowded 2020 Democratic field as a front-runner.

Senate Democrats from Joe Biden’s twin home states of Delaware and Pennsylvania are endorsing him for president.

Casey says, “At this make-or-break moment for the middle class, our children and our workers, America needs Vice President Joe Biden to be its next President.”

Biden was raised in Scranton, Pennsylvania, but has lived most of his life in Wilmington, Delaware. Biden represented Delaware in the Senate from 1973 to 2009.

President Barack Obama is weighing in on Joe Biden’s entry into the 2020 presidential race, saying through a spokeswoman that selecting Biden as his running mate in 2008 was “one of the best decisions he ever made.”

Obama did not endorse Biden, nor is he expected to endorse any candidate early in the Democratic primary. But the fact that he released a statement — something he hasn’t done after any other candidate announcements — underscores his close personal bond with Biden.

Obama spokeswoman Katie Hill says Obama relied on Biden’s “knowledge, insight, and judgment throughout both campaigns and the entire presidency.”

The former president has met with multiple Democratic presidential contenders and is said to welcome the large 2020 field and believe it will make the eventual Democratic nominee a stronger White House contender.

Joe Biden has formally entered the 2020 race for president.

The vice president under President Barack Obama made the announcement in a video released Thursday morning.

The move marks what will likely be the 76-year-old’s final opportunity to seek a job he has eyed for more than a generation. He struggled in two previous campaigns.

One of the most recognizable names in U.S. politics, Biden leads most early Democratic primary polls. But as an older white man who spent a half-century in Washington, it’s unclear if he will be embraced by today’s increasingly liberal Democratic Party.