Flag waving-crowds lined the tracks as a special funeral train carried the flag-draped body of former President George H.W. Bush to College Station, Texas, where he’ll be buried on the grounds of his presidential library.

As the train passed through the towns a group of elementary students could be seen holding a banner that read “THANK YOU,” firefighters saluted atop their truck on an overpass and a woman in a red hat held a sign that said “Rest in Peace George” with hearts.

Here are some scenes along the route as the train went from the Houston suburb of Spring to College Station:

MAKING A MEMORY FOR HIS DAUGHTER

Andy Gordon took his 6-year-old daughter, Addison, out of school so that she and her 3-year-old sister could watch the train pass.

Gordon, who lives in Magnolia, took his daughters to the nearby town of Pinehurst on Thursday to see the train pass through. Addison carried two small American flags in her hand as she waited for the train.

Gordon, 38, said, “Hopefully, my children will remember the significance and the meaning of today.”

PAYING RESPECTS TO HIS COMMANDER-IN-CHIEF

A 54-year-old Texan who served in the U.S. Air Force during “Operation Desert Storm” was waiting for the train to pass through Pinehurst so he could pay his respects to his former commander-in-chief. 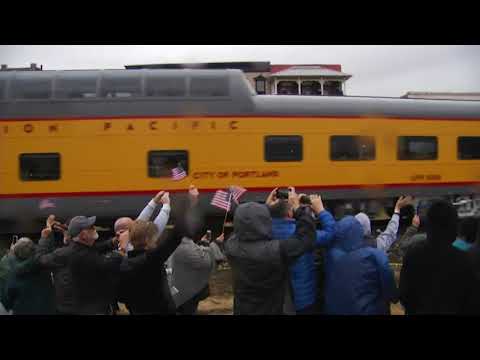 Kevin Gulley, who lives in nearby Cypress, wore a blue jacket with “U.S. Air Force” embroidered in gold lettering on the back and had a button reading “Looking Great for ’88″ on his lapel.

“He was a part of my life when I was there, and I wanted to pay my respects as he’s on his way to his final resting place,” Gulley said.

Gulley stood waiting next to his son’s former football coach, 56-year-old Bill Powers. The two ran into each other here waiting for the train.

Powers says, “It’s what he wanted because he wanted everybody to be together.”

SOUVENIRS FROM THE DAY

Some who lined up along the train route decided to make — or pick up — their own keepsakes to remember the day.

Some left coins on the tracks to be flattened as the train passed over and others picked up nearby rocks to take home.

Doug Allen, 55, of Cypress, left eight coins on the tracks before the train passed through Pinehurst. The train left his three quarters, three dimes and two pennies flattened and slightly discolored.

He says he only thought of the idea a few moments before the train passed and his wife and her friend found the coins in their bags. Laughing, he said, “That’s all the change we had.”

Judy Hulsey said it was a “very moving experience” to be able to wave at the family of former President George H.W. Bush as they rode in the special funeral train taking his body to be buried.

Hulsey, of Brenham, was among those who went to Navasota to watch as the train passed through on its way to College Station. American flags were hung on buildings and a large sign read “President George H.W. Bush Thank You For A Lifetime Of Service.”

She said it was worth standing out in the cold and rain to be able to honor Bush and his family.

Kerry Dunford, of Rosenberg, said, “I think it’s great for the country to do this sort of thing so more people can be a part of showing their respects and giving a tribute to this man who truly deserves it.”

This story has been corrected to show that the community where Dunford lives is Rosenberg, not Rosenburg.