Road rage suspect who killed deputy was in US illegally

SPOKANE, Wash. (AP) — The road rage suspect who killed a sheriff’s deputy, wounded a police officer and died in a central Washington state shootout this week was living in the United States illegally, the federal government said Thursday.

U.S. Immigration and Customs Enforcement said Juan Manuel Flores Del Toro, 29, was a citizen of Mexico who entered the United States in 2014 at Laredo, Texas, on a temporary agricultural worker visa.

The agency had no record that Flores Del Toro left the U.S. or extended his visa after it expired.

Meanwhile, police said Thursday they were still investigating the suspect’s background and why he led the officers on a chase before the gunbattle.

Flores Del Toro died in a hospital a short time after the Tuesday evening gunbattle.

Investigators do not know why Flores Del Toro fled, and there were no warrants pending for his arrest, Hansberry said.

Police in the past “had limited contacts with him,” but Hansberry described them as “nothing of real significance” without providing further details.

Officers had tried to stop Flores Del Toro’s vehicle after they received a complaint about the motorist’s driving that authorities have described as a “road-rage type event” without disclosing more details. 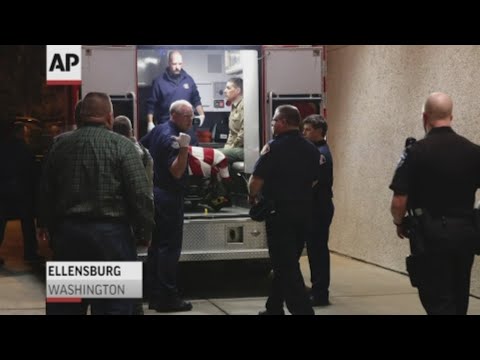 Police chased Flores Del Toro’s car, which stopped in a house trailer park near the small town of Kittitas, about 5 miles (8 kilometers) from Ellensburg. Flores Del Toro got out of the vehicle and used a handgun to exchange gunfire with officers, Hansberry said.

Sheriff’s deputy Ryan Thompson, 42, was killed and Kittitas police officer Benito Chavez, 22, was shot in the leg, suffering a shattered femur. He was hospitalized Thursday in satisfactory condition.

Thompson was married with three children.

It was the first fatal shooting of a law enforcement officer in Kittitas County since 1927, officials said.