INDIANAPOLIS (AP) — Indiana Gov. Mike Pence overrode state law and his own anti-drug policies Thursday to authorize a short-term needle-exchange program designed to help contain HIV infections in a rural county where more than six dozen cases have been reported, all of them tied to intravenous drug use.

All of those infected either live in Scott County or have ties to the county, and all of the infections have been linked to needle sharing among drug users.

Most of the infections involve people who injected a liquefied form of the prescription painkiller Opana. Methamphetamine and heroin account for the remaining cases, health officials said.

Pence, a Republican, said officials from the Centers for Disease Control and Prevention who arrived in the county Monday said it would be “medically appropriate” to authorize some type of needle-exchange program to help stem the infections.

Such programs are illegal in Indiana, and Pence has opposed needle exchanges as part of drug-control efforts. But his order allows Scott County officials to request state approval for a limited, short-term program. 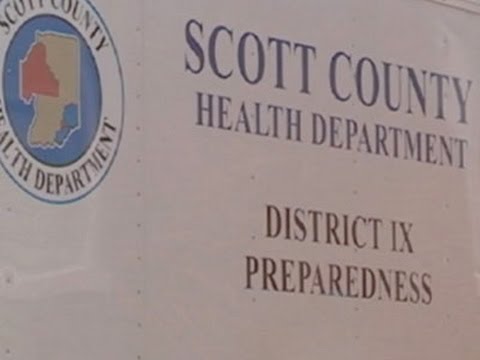 The governor said he was acting to halt the spread of the virus “despite my reservations” about providing clean needles to addicts.

Needle-exchange programs allow drug users to turn in used hypodermic needles in return for sterile ones in an effort to contain diseases such as HIV and hepatitis. HIV is spread mostly through sex.

Pence’s executive order will run for 30 days. After that period, he will consider whether to extend it for another 30 days.

Scott County’s cases have surged from 26 in late February to nearly 80, and that number is expected to rise. Officials are trying to contact as many as 100 people tied to those with confirmed infections of the virus that causes AIDS.

Pence’s order directs the state health department to set up a command center to coordinate HIV and substance-abuse treatment and establish a mobile unit to enroll people in a state-run health program to get HIV testing and treatment.

“This is all hands on deck. This is a very serious situation,” Pence said.

After meeting with Pence, Scott County Sheriff Dan McClain said Wednesday that his county has been fighting prescription pills for years, and the infections tied largely to Opana are just the latest development in a long-running drug-abuse trend that has drained local resources.

“We have become the local rehab, mental health and treatment center, as well as the correction center here,” McClain said.

Don Des Jarlais, director of research for the chemical dependency institute at Mount Sinai Beth Israel in New York, said the places most vulnerable to infections include rural and suburban communities where a new group of drug users started with prescription painkillers and moved onto injecting heroin.

Without drug treatment or syringe-exchange programs, these areas “are ripe for outbreaks, and we should expect more of them unless we really ramp up our HIV-prevention services in those areas,” he said.

The county’s 79 HIV cases represent more than half of the 146 new HIV cases that have been confirmed statewide in Indiana since January, said Ken Severson, a spokesman for the Indiana State Department of Health. The recent surge in infections is the state’s largest-ever HIV outbreak.

“The potential for continued transmission,” he said, “will be there for a decade or more” in southern Indiana.