Sanders still wants a revolution, but now he’s got company

LAS VEGAS (AP) — Bernie Sanders is still leading a revolution. But his ideas no longer feel quite so revolutionary.

The Vermont senator acknowledges that many of his top proposals, which were dismissed as radical four years ago, have been adopted by much of the crowded 2020 Democratic presidential primary field: “Medicare for All,” tuition-free college, spending trillions to combat climate change and a national $15 per hour minimum wage. But he’s out to prove that his second presidential campaign is still about fresh energy and ideas even if its refrains now sound familiar.

“Not only can I lead it, I think I am the person to lead it,” Sanders said in an interview at a plumbers and pipefitters union hall in Las Vegas, when asked if he could helm a revolution when so many of his presidential rivals agree with him.

But there are signs that may not be enough. The campaign is restructuring its staff in key early voting states as the 78-year-old Sanders faces crosscurrents that weren’t in play four years ago. No longer the sole progressive alternative to an overwhelming favorite in Hillary Clinton, Sanders is one of several candidates making explicit appeals to the party’s left wing. This time, his rivals have taken him seriously from the start, a sign of his name recognition but also a status that subjects Sanders to more scrutiny and criticism than at this stage of the 2016 campaign. 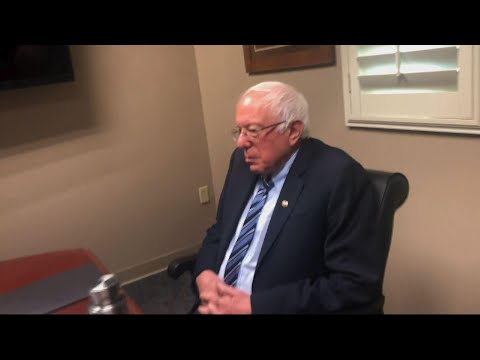 And some of Sanders’ younger competitors are calling for generational change, an issue that could resonate because of questions raised about the readiness for the presidency of another senior candidate, 76-year-old former Vice President Joe Biden.

Not all Democrats have embraced Sanders’ core principles. Kamala Harris is a co-sponsor of his Medicare for All legislation, but the California senator now says she doesn’t favor its call to scrap all private health insurance. Biden, the early front-runner in the primary, has repeatedly hammered Sanders over the plan’s costs.

Few candidates line up more closely with Sanders than Massachusetts Sen. Elizabeth Warren. While they don’t agree on everything, Warren is such a fan of Medicare for All that she’s repeatedly declared, “I’m with Bernie,” when it comes to health care.

Because they agree on so much, Warren is becoming a growing threat to Sanders. She packed tens of thousands of supporters into New York’s Washington Square Park on Monday, harkening back to Sanders’ success in attracting massive 2016 crowds. On the same day, she picked up an endorsement from the progressive Working Families Party, which backed Sanders’ first campaign.

A national NBC News/Wall Street Journal poll released Tuesday found Warren leading Sanders among Democratic primary voters 25% to 14%. Biden still came out on top at 31%. Sanders is in second behind Biden in other national and early state surveys.

Sanders is working to fortify his campaign, recently parting ways with his political director in Iowa, which holds the nation’s first caucus, and replacing his state director in New Hampshire, a state critical to Sanders’ efforts given his landslide primary victory there in 2016.

“They have some challenges,” Brian Fallon, who was chief spokesman for Clinton’s 2016 presidential campaign, said of Sanders’ team. “In a binary race, there were a lot of people who united around an alternative to Clinton. There continue to be true blue Bernie supporters and that probably gives him the most stubborn floor of support of any candidate, but those numbers are smaller. The non-establishment vote is spread around.”

Sanders rejected the notion that the primary may eventually force liberal Democrats to choose between him and Warren, saying, “I think that Sen. Warren, who is a friend of mine, is running her campaign. We are running our campaign.”

Warren has similarly praised her longtime friendship with Sanders rather than answer questions about whether a showdown is coming.

Still, there are questions about how long the holding pattern can last. On Sunday, Sanders will travel to Oklahoma, where he’ll attend a Comanche Nation Fair Powwow. While he’s not expected to directly talk about Warren, the trip will take Sanders to her native state a month after she apologized to Native Americans over her past claim to tribal heritage. Sanders has also gotten more aggressive with Biden lately, ticking through a list of the former vice president’s unpopular votes while he was in the Senate — including supporting the Wall Street bank bailout.

With just over four months before primary voting begins, Sanders said he doesn’t believe anyone in so crowded a field will carry states with 50% of the vote.

“So the question is, who is going to get the 30, 35, 40% of the vote that you need to carry the states?” he said. “I think that because of our strong grassroots movement we are in a strong position to do that.”

Sanders’ advisers, meanwhile, argue that his appeal now goes beyond political insurgency, noting that he campaigned hard for Clinton after the 2016 primary and that he has begun working more closely with state parties this cycle, trying to build support through traditional channels.

Fallon also noted that Sanders has been ahead of many of his rivals on things like joining striking McDonald’s workers in Iowa — giving him revolutionary political cred that rises above policy overlap with other candidates.

“With the Bernie crowd, that’s the space to say, ‘Don’t settle for imitators,’” Fallon said.

A lot of Sanders’ central message remains the same, though, and still appeals to voters.

“I think I’ve heard a lot of what he’s said already,” said Alejandro Hernandez Jr., a 23-year-old federal employee who saw Sanders at a recent Latino issues forum in Las Vegas. “But just to see his actual energy and presence, the way he commands the room and really the elegance with which he speaks, it’s truly impressive.”