AP explains: The delay in US aid to Ukraine

WASHINGTON (AP) — The Trump administration’s delayed release of $250 million in military aid to Ukraine is coming under new scrutiny in light of a whistleblower complaint about President Donald Trump. Here’s a look at what’s known about the gap in U.S. assistance.

The United States began providing military aid to the government of Ukraine shortly after Russia illegally annexed Ukraine’s Crimean peninsula in 2014. With Ukraine’s new president still grappling with separatist rebels in the east, the aid has long been viewed as a measure of Washington’s determination to push back against Russian President Vladimir Putin.

But over the summer, it emerged that the Trump administration was delaying the release of this year’s $250 million installment.

It is a decision cloaked in mystery. By late August, according to congressional aides, the White House budget office acknowledged it was responsible for the delays, saying a policy review was underway.

“The President has been consulting with his national security leadership team to determine the best use of Ukraine security assistance funds to achieve US national security interests,” Office of Management and Budget staff wrote in an email to House Appropriations Committee staff aides. Agencies, OMB said, “must wait to obligate them until the policy review process is complete and the President had made a final determination.” 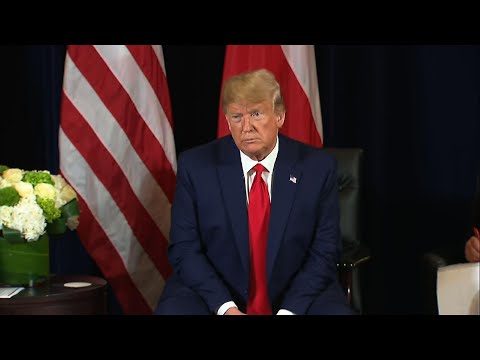 News of the hold-up alarmed Ukraine’s many supporters in Congress, including members of the House and Senate appropriations committees, which were moving on separate tracks to rebuke the administration. House Appropriations Committee Chairwoman Nita Lowey added a provision to a House stopgap spending bill to ensure the 2019 Ukraine funds would remain available after the Sept. 30 end of the fiscal year. The White House informed lawmakers Sept. 11 that it was releasing the money.

The struggle was resolved only a couple of days after lawmakers returned to Washington from their summer recess, with the administration releasing the funds.

WHY DOES THE DELAY MATTER?

The timing is under scrutiny by Democrats suspicious that President Donald Trump may have used the security money as leverage in dealing with Ukraine’s new president, Voldymyr Zelenskiy. Trump and his personal attorney, Rudy Giuliani, have acknowledged efforts to prod a Ukrainian investigation into the business activities of Hunter Biden, the son of former Vice President Joe Biden — and the curious, temporary halt to delivery of the Ukraine aid package.

But there is another possible explanation for the temporary suspension of aid. At the time, Ukraine was transitioning to a new, democratically-elected government and a review of the aid may have been justified under such circumstances. Trump has repeatedly said U.S. allies need to spend more on their own defense.

Asked Sept. 2 about Ukraine aid, Vice President Mike Pence said he did not raise the Bidens at a meeting with Zelenskiy, though he stressed he told Zelenskiy that the U.S. government has “great concerns about issues of corruption.”

To invest additional taxpayer money in Ukraine, “the President wants to be assured that those resources are truly making their way to the kind of investments that will contribute to security and stability in Ukraine,” Pence said. “The simple fact is that the United States has carried the load on most of the security investments in Ukraine.”

The pattern of limited facts, however, has Democrats and other Trump critics questioning whether the president pressed Zelenskiy to investigate the Bidens as a way of helping his own reelection bid.

In a Monday letter to Majority Leader Mitch McConnell, Senate Minority Leader Chuck Schumer demanded the assistance of the Senate’s GOP majority in getting answers about the Ukrainian aid mystery and other facets of the brewing controversy involving Trump and Ukraine.

Schumer, D-N.Y., asked for the names of “administration officials who directed that $250 million of military aid to Ukraine be delayed, and request that all records related to this decision be turned over to Congress.”

McConnell, R-Ky., countered just hours later that the Senate Intelligence panel, which has a reputation for bipartisanship, especially between Chairman Richard Burr, R-N.C., and top Democrat Mark Warner of Virginia, is the proper venue for any investigation, noting that the panel is working to get the intelligence community’s inspector general before the committee.

“I had been personally pressing them to release security assistance funding for several months, to ensure the United States did not walk back our important commitments to Ukraine,” McConnell said on Monday.