The Latest: Senate Republicans stick up for Syrian Kurds

WASHINGTON (AP) — The Latest on President Donald Trump and Syria (all times local):

Senate Republicans are sticking up for the U.S.-allied Syrian Kurds after President Donald Trump defended his pullout of American troops, which cleared the way for the Turkish assault on the Kurds.

GOP Leader Mitch McConnell calls the partnership “a terrific alliance” that set the Islamic State group back and says he is “sorry we are where we are.”

Sen. Joni Ernst of Iowa adds, “We really have left behind and abandoned a strategic partner, the Kurds, who stood by our men and women in uniform in the fight” to defeat IS.

At the White House, Trump defended his decision, saying the Kurds were “no angels.”

The House has overwhelmingly voted its bipartisan condemnation of President Donald Trump’s withdrawal of American forces from northern Syria.

Despite stark divisions over Democrats’ Trump impeachment inquiry, Democrats and Republicans banded together Wednesday and approved a nonbinding resolution by 354-60 vote. 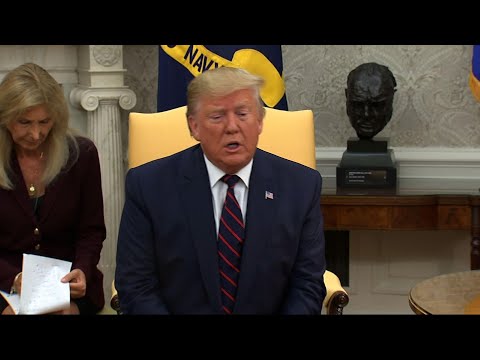 The resolution states Congress’ opposition to the troop pullback and says Turkey should cease its military action in Syria. And the measure says the White House should present a plan for an “enduring defeat” of the Islamic State group.

Many worry that IS may revive itself as Turkish forces attack Syrian Kurds holding the extremists.

The House debate was extraordinary for the intensity of lawmakers’ opinions.

Republicans called the troop withdrawal “disastrous” and a “catastrophe.” Democrats criticized Trump directly, with Rep. Seth Moulton saying Trump “has taken the side of dictators and butchers.”

President Donald Trump says members of the Islamic State group who were being held in prisons by Kurdish fighters in Syria have been deliberately released in an effort to make him look bad.

But senior U.S. officials are casting doubt on those claims. Those officials say some Syrian Kurdish forces have moved north to fight Turkish troops who launched an attack across the border against the Kurds. The U.S. officials say other Kurds have stayed to guard the detention centers that hold thousands of IS militants.

The officials say the U.S. doesn’t have good on-the-ground information about what’s going on in some of the detention centers as American forces pull back from the border region. The officials say they believe only a small number of detainees have escaped.

These officials aren’t authorized to public discuss ongoing operations in Syria and are speaking on condition of anonymity.

President Donald Trump says things are “very nicely under control” in northern Syria where Turkish forces are fighting Syrian Kurds who were aligned with the U.S. against the Islamic State group.

Trump tells reporters at the White House that Syrian Kurdish fighters that Turkey considers terrorists are more dangerous than IS.

Turkey believes the Syrian Kurds who fought alongside the U.S. are linked to the Kurdistan Workers’ Party, known as the PKK, which it considers terrorists.

Trump is defending his decision to pull U.S. forces out of the Syrian border region where brutal fighting continues.

At a news conference with Trump, Italy’s president says Italy is deeply concerned about the Turkish offensive in Syria and says it will “offer new space” to IS.

Sen. Lindsey Graham, one of Trump’s closest allies, says Trump’s decision will allow IS to remerge. The South Carolina Republican says Trump will “be held accountable.”

Graham says Trump’s decision “is against all sound military advice.” Graham says he hopes Trump “will reconsider, stop the bloodshed and reset the table before it’s too late.”

Graham says that if Trump continues along those lines, “then our foreign policy is in a very bad spot in the Middle East and to those who think the Mideast doesn’t matter to America, remember 9/11 we had that same attitude on 9/10 2001.”

Another Republican senator, Florida’s Marco Rubio, tells reporters that he doesn’t know what can be done to undo the harm that’s resulted from the withdrawal. Rubio says “there are some mistakes that are not easy to reverse. And there are some that are irreversible.”

President Donald Trump says U.S. troops are “largely out” of a region of Syria where Turkish forces are attacking Kurdish fighters.

Turkey launched a military operation against Kurdish fighters allied with the U.S. after Trump pulled troops from the region this month. As he met Wednesday with Italy’s president, Trump said: “If Syria wants to fight to take back their land, that’s up to them and Turkey.”

Trump adds: “There’s a lot of sand that they can play with.”

But as Trump defends removing troops from northeastern Syria, he’s talking up his recent decision to send more troops to Saudi Arabia to help the kingdom defend against Iran.

Trump says the U.S. is sending missiles and “great power” to the Saudis, and adds: “They’re paying for that.”