DETROIT (AP) — To many black clergy, Maryland Rep. Elijah E. Cummings was more than a formidable orator, civil rights champion and passionate public servant, he was also one of them — in practice, if not profession.

His upbringing, as “a preacher’s kid” gave him a comfort level with ministers and clergy to the point they “almost regarded him as a preacher,” said the Rev. Charles Williams II, senior pastor of Detroit’s Historic King Solomon Missionary Baptist Church.

Cummings, the son of a sharecropper and pastors who died last Thursday at 68, was among a generation of lawmakers, civil rights leaders and social justice advocates who grew up under the influence of the African American church. From Martin Luther King Jr.’s Ebenezer Baptist Church to Birmingham’s 16th Street Baptist Church, the black church is intertwined in African American history and the struggle for equality. It was the primary institution for organizing demonstrations, providing training and selecting leaders. Part of the role was instilling in those leaders a commitment to speaking for those who could not speak for themselves, giving one’s life in service to the community and standing against injustice.

Black pastors and historians alike remember Cummings, who will be buried in Baltimore Friday, as a man who absorbed the lessons of the church and exemplified its teachings in serving his constituents.

Mary Frances Berry, a professor, author and former member of the U.S. Commission on Civil Rights, described Cummings as being among the last of the black political leaders to be heavily influenced by a black church. That institution spawned the civil rights movement but importantly decades earlier, “preachers were the leaders before blacks elected to office became leaders,” she said.

“He is right on the edge of change. ... He belongs to the generation of people for whom the church is an important base,” Berry said, adding that you could see it in “his style, the way he carried himself, the way he spoke about things.”

Berry said Cummings “exuded what we call moral authority” and that authority was channeled into the fight for social, racial and economic equality. She believes Cummings grew frustrated when neither church nor political leaders could overcome problems like poverty, drug abuse, mass incarceration and other “evils that beset communities.”

“The frustration would not exist if one did not have a great spiritual and moral concern in the first place,” she said.

While the church was shaping black politics, Cummings’ journey also was personal, according to Bishop Walter Thomas, his pastor at the New Psalmist Baptist Church in Baltimore.

“I met somebody who already knew God and had a connection to God and a love for God and showed the calling of God on his life,” Thomas said. “He’s been active and involved in our church for almost 40 years: regular in worship, always attending, and he uses his faith and his witness both as congressman and as person.” 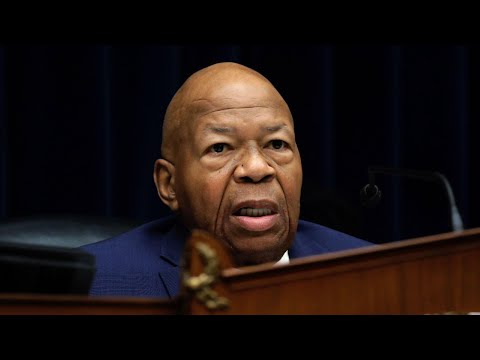 Cummings rose to become chairman of one of the U.S. House committees leading an impeachment inquiry of President Donald Trump, but long advocated for the poor in his black-majority district that encompasses a large portion of Baltimore and more well-to-do suburbs.

Throughout his career, the Democrat used his fiery voice to highlight the struggles and needs of inner-city residents. He believed in much-debated approaches to help the poor and addicted, such as needle exchange programs to reduce the spread of AIDS.

In 2015, when the death of black Baltimore resident Freddie Gray sparked the city’s worst riots in decades, Cummings carried a bullhorn in the streets and urged crowds to go home and respect a curfew. He spoke at Gray’s funeral, asking lawmakers in the church to stand up to show Gray’s mother they would seek justice.

For the Rev. Dr. Kelly Brown Douglas, Cummings’ actions embodied the black church “at its best.”

“The black church at its best has always been a church that when no one else has fought for the black community, the black church has been that voice,” said Douglas, dean of the Episcopal Divinity School at Union Theological Seminary in New York City.

Trump criticized the Cummings’ district as a “rodent-infested mess” where “no human being would want to live.” Cummings replied government officials must stop making “hateful, incendiary comments” that distract the nation from its real problems, including mass shootings and white supremacy.

Still, the late lawmaker didn’t let political or partisan issues get in the way of working with people from “all walks of life,” said the Rev. Donte Hickman, pastor of Southern Baptist Church in Baltimore.

Hickman visited the White House to talk about the Trump administration’s efforts to help urban areas partly through tax breaks for those who invest in specific neighborhoods.

Hickman said he spoke with Cummings about the efforts, and the congressman only wanted to ensure that money would truly help Baltimore.

More recently, Cummings met with numerous faith leaders, including those with different political views, to share ideas on improving the community, Hickman said.

“I don’t think he was against other sides — I think that Congressman Cummings was trying to gather even more collective vision for what could be done to bring Baltimore to a better place, to an equitable place for everyone,” he said.

David Emmanuel Goatley, director of the Office of Black Church Studies at Duke Divinity School, said Cummings is of a generation of political leaders who were formed in part through the life and work of the church.

“A lot of the work of the black church was developing itself as an institution for developing leaders and a lot of that development was around racial uplift,” Goatley said. “In racial segregation, it was largely the church that gave opportunities for leadership development.”

“We’re getting toward the end of that generation,” he added.

As black communities have become more porous and opportunities to develop skills have come from elsewhere, the influence of the church has changed — not so much diminishing as becoming more widely distributed: “I still believe it is still crucial and it is still present. Black churches are still repositories for social consciousness and community uplift.”

Both Hickman and Douglas say Cummings will be missed, particularly within the churches working toward justice and equality. His loss, they add, should embolden such efforts.

“I hope his death will call us toward our better angels,” Douglas said, “because he was one of the better angels (who) is now looking over us.”

Contributing to this story were Associated Press writers Gary Fields in New York, Mike Householder in Detroit and Regina Garcia Cano in Baltimore.