TOPEKA, Kan. (AP) — John T. Booker Jr. struck others as strange or even troubled but also as a young man not shy about discussing his faith as a Muslim or debating Islamic philosophy at the Topeka mosque he attended. His name tag at his last job identified him as Muhammad.

But the 20-year-old Topeka resident told a confidante who was in fact an FBI informant six months ago that he wasn’t liked at his mosque because he expressed support for the terrorist group al-Qaida — views that would have gotten him barred, according to the imam. The cleric said the FBI brought Booker to the mosque last year, said he had a mental health disorder and sought counseling to turn him from views behind Facebook postings about plans to die in a jihad.

Even amid the counseling, Booker was in contact with two FBI informants portraying Islamic State group sympathizers, according to a criminal complaint filed in federal court. Authorities said Booker was arrested Friday trying to arm what he thought was a 1,000-pound bomb outside Fort Riley, about 70 miles west of Topeka.

Booker’s interest in Islam appears to have begun in high school, where he also was a member of the Junior ROTC at Topeka West High School, according to fellow cadet Alfonso Gonzalez. But Gonzalez said jihadist postings by Booker on Facebook last year were surprising and his arrest, shocking. 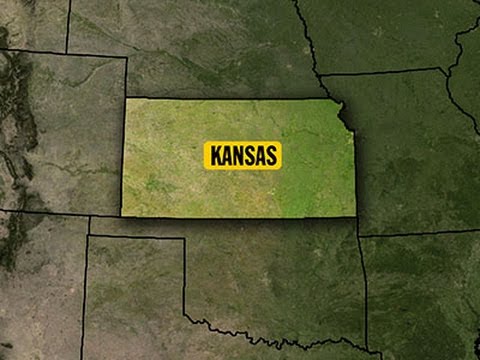 “I never heard anything radical or critical of the government or the Army,” Gonzalez, now a 20-year-old computer science student at Kansas State University, said Saturday. “He struck me as pretty harmless.”

Booker is charged with three federal crimes, including attempting to use a weapon of mass destruction.

Iman Omar Hazim said Blair began showing up at the Islamic Center of Topeka beginning about two months ago and was clearly acquainted with Booker.

The imam said of Booker, “He liked to get into debates with other people in the Islamic center about philosophical differences within Islam.”

And congregation member Dawar Saeed, a 68-year-old retired engineer, said Booker appeared to be “a teenager needing some guidance.”

In the past few months, Booker worked at a Topeka-area Wal-Mart but left the job Wednesday, company spokesman Brian Nick said Saturday, declining to discuss the details of Booker’s departure. The criminal complaint against Booker said he arranged to have the FBI informants build his bomb the same day he left Wal-Mart.

Nick said Booker’s paperwork was under that name but he asked to be called Muhammad. The criminal complaint said Booker had an alias — he corrected the spelling during a court hearing — of Muhammad Abdullah Hassan.

Gonzalez, who was in JROTC class with Booker during their senior high school year, in 2011-12, said Booker argued with some students who criticized him for his faith.

“He was usually pretty loud. He was always talking to somebody,” Gonzalez said. “People thought he was a little strange.”

Hazim said the FBI told him early in 2014 that Booker suffered from bipolar disorder, characterized by unusual mood swings.

Hazim said Booker told him days before his arrest that he stopped taking medication partly because it was expensive. The imam added that most people who see Booker “recognize that there are some mental problems there.”

The criminal complaint against Booker said he told an FBI informant in October that he clashed with other mosque members over supporting extremist groups. Hazim said he never heard Booker express support for any violent extremist group.

But Hazim said he received an anonymous call about two months ago about Facebook posts from Booker, again speaking about becoming a martyr in jihad. The imam stopped giving Booker rides to the center and work, but Booker continued to attend prayers and activities at the center.

“I had a sense of him drifting and I had seen him just drifting into space and he would have a real deep grin on his face like he was thinking of something that would make him laugh,” Hazim said.