HARTFORD, Conn. (AP) — A college student wanted in connection with two killings in Connecticut was taken into custody when he walked out of a wooded area in Maryland and surrendered peacefully to officers who had their guns drawn, ending six days on the run in several states and providing some relief to the victims’ families, police said Thursday.

“We talked to all the family members of the victims,” state police Lt. Michael Pendleton said at a news conference. “They were very appreciative of our efforts and bringing him to justice. I think they were very relieved that he was finally in custody.”

Manfredonia fled to another home in Willington and robbed a man of his guns and pickup truck, then drove about 70 miles (110 kilometers) southwest to Derby, Connecticut, on Sunday, authorities said. 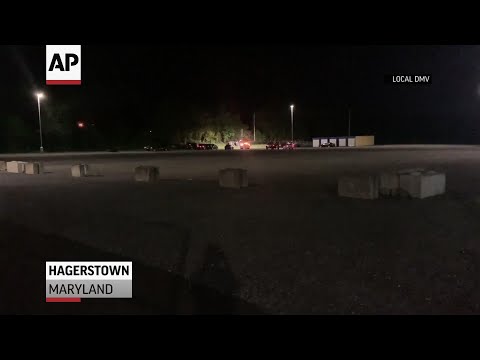 In Derby, police allege Manfredonia fatally shot a high school acquaintance, Nicholas Eisele, 23, then forced Eisele’s girlfriend into a car and fled the state. The woman was found unharmed with the car at a rest stop near near Columbia, New Jersey, near the Pennsylvania line.

Connecticut State Police said they had no information on motives for the attacks Thursday.

“All of us are greatly saddened by the loss of life of two Connecticut residents, the severe injury to an elderly person, the terror inflicted upon countless others,” said Col. Stavros Mellekas, commander of Connecticut State Police. “The savagery of these crimes ... propelled our detectives to commit themselves to finding this individual as quickly as possible.”

On Wednesday night, authorities from several law enforcement agencies converged at a truck stop just outside Hagerstown — after learning an Uber driver had dropped him off there — and Manfredonia walked out of some woods and approached them, Hagerstown police Lt. Rebecca Fetchu said.

Pendleton said the officers, including two Connecticut State Police detectives, drew their guns and ordered the University of Connecticut student to the ground.

“At that point, he went to the ground,” Pendleton said. “He did not resist, and absolutely no force was used to effect the arrest.”

Manfredonia also led police to a black bag containing a gun, believed to be the one used to kill Eisele, that was about 200 yards away, officials said.

Manfredonia was scared and exhausted when he surrendered, said Michael Dolan, a Connecticut lawyer representing Manfredonia’s family. Dolan said he talked with Manfredonia on Wednesday night.

“The family was relieved that this ended peacefully,” Dolan said. “They’re anxious for his return to Connecticut.”

Dolan said Manfredonia had a history of depression and anxiety, but had never shown signs of violence. Manfredonia, a Newtown native, was an honors engineering student at UConn, Dolan said.

Manfredonia is detained without bail at the Washington County Sheriff’s Office in Maryland. In a booking photo released by the sheriff’s office Thursday, he has no expression on his face, his hair is slightly disheveled and he is wearing a yellow shirt.

Cyndi DeMers told The Hartford Courant that she was “doing the happy dance that all are safe.”

“My Ted is at peace and will continue to watch over our family,” she said. “We will all move forward and continue on as he has instructed us to do.”

She did not return messages from The Associated Press on Thursday.

The death and crime spree began Friday morning when Manfredonia went to DeMers’ neighborhood looking for a young woman he knew, Cyndi Demers told the AP on Tuesday. Manfredonia was walking down the street wearing a motorcycle helmet, she said.

Manfredonia said his motorcycle had broken down and Ted Demers gave him a ride to the motorcycle, Cyndi Demers said. Then Manfredonia attacked Ted Demers and a neighbor who came to his aid, she said.

Investigators tracked Manfredonia to Pennsylvania, where police said he took an Uber to a Walmart in East Stroudsburg. Authorities searched the area but didn’t find him. On Tuesday night, a man fitting his description was spotted near Scranton, Pennsylvania, prompting another search there.

Police believe Manfredonia stole a car and abandoned it in Chambersburg, Pennsylvania, before taking an Uber to Hagerstown on Wednesday. Later that night, he took another Uber to the truck stop where he was captured, authorities said.

Uber officials said in a statement Thursday that they provided information to law enforcement about Manfredonia. They declined to give details.