“Over the course of his historic career with the Los Angeles Police Department that spanned over four decades, Chief Beck became a nationally recognized leader who oversaw transformational community policing and operational management that resulted in historic reductions in crime and improved clearance rates,” Lightfoot said.

Beck’s name surfaced as a possible interim even before Eddie Johnson, 59, made his expected announcement that he was stepping down after more than three years as Chicago’s police superintendent.

Lightfoot said Beck has worked with Johnson from the beginning of Johnson’s tenure, and even dispatched his chief of staff to work with Johnson for a year. She also noted that Beck, like Johnson, has refused to cooperate with federal agents’ efforts to capture immigrants living in the U.S. illegally — a policy she supports. 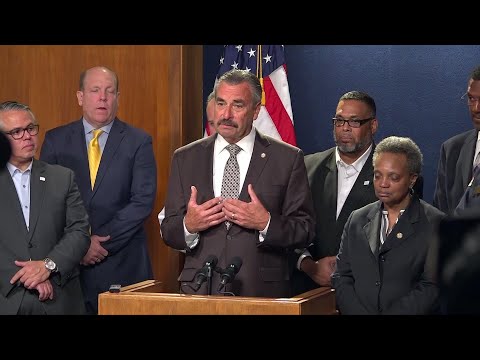 Beck, 66, said he will help in the nationwide search for a permanent superintendent for Chicago and made it clear that he is not interested in the job. For the next several weeks, he said, he will work closely with Johnson, whom Lightfoot has said agreed to remain on the job until the end of the year.

The son of a Los Angeles Department Police deputy chief, Beck spent more than 40 years with the police force, replacing William Bratton as chief in 2009. He retired last year on his 65th birthday.

In his nine years as chief, Beck was known for mixing reforms with old-school policing. His tenure was marked with efforts to improve community relations, particularly amid the Black Lives Matter movement, and he equipped officers with body cameras.

Asked about a call by Black Lives Matter for his ouster after an officer fatally shot a black woman in 2015, Beck pointed to an 80% clearance rate on homicide cases in a predominantly black area of the city.

“That shows a level of (community) cooperation that is caused by trust,” he said.

Beck comes to a city that often makes headlines for shootings and homicides, although those crimes have dropped since Johnson took over in 2016. Beck takes over a department that has dramatically expended the use of high-tech crime-fighting technology and implemented the largest rollout of police body cameras in the United States.

In Chicago, Beck will be a newcomer running a department where the rank-and-file has had rocky relationships with outsiders. Jody Weis, hired by then-Mayor Richard M. Daley after a long career with the FBI, was not a popular superintendent and then-Mayor Rahm Emanuel’s choice, Garry McCarthy, was even less popular with the force than Weis.

Beck said he’s confident the rank-and-file will come to realize that he will do whatever he can to give them the support and tools they need and will accept his leadership.