Punching back at Trump, Biden defends his Ukraine role

Biden’s more aggressive approach was on display late Wednesday in Nevada, where he unleashed one of his most forceful attacks yet against Trump and offered a detailed explanation of his vice presidential work that Trump is now trying to turn into a liability.

Contrary to Trump’s unfounded assertions that Biden and his son Hunter were part of widespread corruption in Ukraine, the Democratic presidential contender told hundreds of supporters that he conducted “a fully transparent policy ... in front of the whole world” when he pushed for the firing of Ukraine’s top prosecutor, Viktor Shokin.

“We weren’t pressing Ukraine to get rid of a tough prosecutor. We were pursuing Ukraine to replace a weak prosecutor who wouldn’t do the job,” Biden said of an Obama administration policy supported by other Western governments that viewed Shokin as incompetent or perhaps corrupt.

The remarks signal that Biden is feeling the continued pressure from Trump’s attacks, even if they are not tethered to truth. Previously, Biden had mostly avoided the details of Trump’s claims, instead pointing to fact checkers who have debunked them. 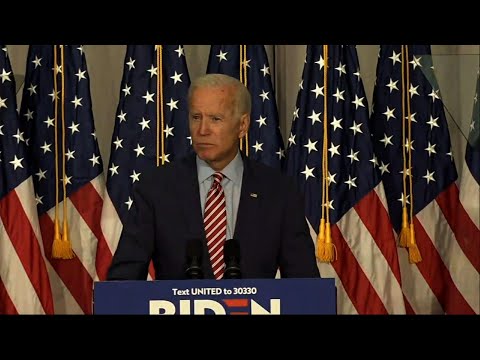 “You can’t assume that the American people know that this president is lying, so you have to fight back with the truth,” Biden campaign chairman Cedric Richmond said in an interview Thursday. “The VP is used to fighting bullies. He’s going to meet (Trump) where he is and make sure he clears up the record so the people who would normally believe what a president says know that he’s lying like he always does.”

Before his comments in Nevada, Biden said repeatedly that he was determined to focus on issues such as health care, education and economic opportunity. He delivered a brief statement last month after the White House released a memo and whistleblower report _ now the crux of a House impeachment inquiry into the president _ that details how Trump pressed Ukrainian President Volodymyr Zelenskiy to investigate the Bidens anew, despite no previous findings of wrongdoing.

Trump’s attacks, Biden said at the time, will “come and they’ll go, and in time they’ll soon be forgotten.”

But Richmond said Biden now has little choice but to take Trump’s claims head on, while highlighting his own policy proposals and emphasizing his overarching argument that Trump is unfit for office. Richmond pointed to how Trump successfully used the fury over Hillary Clinton’s private email server as secretary of state to brand her as “Crooked Hillary” and deflect scrutiny of his own business dealings and international entanglements.

Trump continued his Biden branding effort Thursday by insisting to reporters at the White House that Hunter Biden’s business activities in China should be investigated. Trump said he’d not yet asked President Xi Jinping to intervene, as he did in a July 25 telephone conversation with Zelenskiy, a move at the center of impeachment proceedings because it could be found to violate U.S. law forbidding the solicitation or acceptance of foreign assistance in an American election.

“This president is scared” of losing to Biden, Richmond said in response, “and he’s acting out.”

There is perhaps no course for Biden without risk and frustration.

Clinton in 2016 produced reams of policy proposals and talked about them in detail, even as she made many of the same arguments Biden offers about Trump’s character. Yet she also never plainly apologized for using a private email server as secretary of state. The FBI investigated her use of a private server and decided against criminal charges. Still, she was dogged by media scrutiny and Trump’s insistence that she’d hidden something nefarious.

In Biden’s case, his campaign sees even less substance to Trump’s assertions. Hunter Biden’s Ukraine affiliations were disclosed publicly at the time. He had served on the board of a Ukrainian energy firm that, at one point, was under Shokin’s scrutiny. That inquiry was dormant when Joe Biden ratcheted up pressure for Shokin’s ouster.

The elder Biden said then and now that he’s “never” talked to his son about his business dealings. The U.S. also had support internationally for its opposition to Shokin. Ukrainian officials, including Shokin’s successor, have since said the Bidens were never implicated in any wrongdoing

Richmond said it “would certainly help” for Obama to make a public statement explaining and defending Biden’s role for him in foreign affairs, even if it would draw more headlines. But Richmond said the campaign isn’t asking Obama for help.

“I’m not sure he has the duty to do (defend Biden) or the responsibility to do that,” Richmond said, “but to the extent that it is to defend his own ethical administration, I would set the record straight.”

Obama’s aides say he plans to remain neutral in the primary.

Biden, meanwhile, will continue to make the case that he says got him into the race in the first place.

“What has brought us here is simply this: the abuse of power,” Biden said in Reno, explaining that Trump’s phone call with Zelenskiy amounted to “a personal, political vendetta against me because I don’t think he wants to run against me.”

Turning directly to Trump, Biden offered one more offensive. “Let me make something clear to Trump and his hatchet men and the special interests funding his attacks against me,” he said. “I’m not going anywhere.”