Trump’s relentless justifications of his erroneous warnings that Hurricane Dorian was threatening Alabama on Sunday, which created days of ridicule and skepticism, are just the latest example of the president’s lifelong reluctance to admit an error, no matter how innocuous.

His fervent, dayslong pushback has displayed not only his prolonged focus on a personal spat but his willingness, notably again late on Thursday, to deploy government staff and resources to justify an inaccurate claim. Presidential proclamations can move markets, rattle world capitals and, in this case, unnecessarily alarm the residents of a state. Trump’s relationship with the truth and accountability threatened to, yet again, diminish the weight of any president’s words.

“Great presidents admit when they’ve screwed up, they fix it, and they move on,” said presidential historian Jon Meacham. “Right now, it is a mistake about a hurricane hitting a state. But it can also be a far bigger deal and cost people lives and help create a climate where people can’t trust the government.”

Trump was at it yet again on Friday, contending he had been right all along about the storm and insisting that it was the media, not him, “fixated” on the issue. 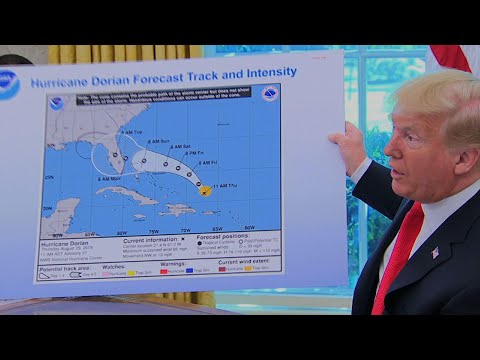 This was far from the first time Trump has refused to admit a mistake. Examples range from the harmless, like his assertion that he had the largest inauguration crowd in history, to the more serious, like his claim of widespread voter fraud in 2016 that led to the establishment of an election commission to try and back up his claim.

This particular Trump tempest, as so often, began with a tweet.

On Sunday, the Republican president warned that Alabama was “most likely to be hit (much) harder than anticipated.” By then, however, Alabama faced no threat at all from Dorian, as the National Weather Service quickly declared.

Rather than dropping it, Trump went into overdrive defending his alert, and he was still at it four days later.

On Wednesday, Trump displayed a map of Dorian’s projected path that showed the cone of uncertainty covering much of Florida but stopping in its panhandle. Until, that is, an extension was added in black marker that covered a swath of Alabama.

That night and the next day, he took to Twitter to again insist that certain storm tracking models proved he was right. He tweeted outdated maps, he pushed White House staff to support his claims and he doubled down — eight times over — on his erroneous forecast.

“In the one model through Florida, the Great State of Alabama would have been hit or grazed,” he said in one of the tweets. “What I said was accurate! All Fake News in order to demean!”

It was he, Brown wrote under the White House letterhead, who briefed Trump on Sunday, showing him the official National Hurricane Center forecast but also a number of other models, which “showed possible storm impacts well outside the official forecast cone.”

The running controversy, stirred daily by the president, has electrified social media, with #Sharpie trending on Twitter and jokes galore. But, for some, it has become a new referendum on Trump and his fitness for office.

“I’m really worried. I feel sorry for the president,” said Democrat Pete Buttigieg, who hopes to take Trump on in the 2020 election. “And that is not the way we should feel about the most powerful figure in this country. Somebody on whose wisdom and judgment our lives literally depend.”

But White House allies defended the president and accused the media of preferring to overreact to the blunder rather than focus on the lives still in the storm’s way.

“This president gets the worst press of any president in the history of the republic,” said Geraldo Rivera, a reporter and Trump confidant. “Everything he says and does is cross-checked and scrutinized to reveal him to be stupid, uninformed or a liar.”

Even as the hurricane battered the East Coast, Trump’s attention was still on Alabama, repeatedly tweeting old forecasts that suggested Alabama could get hit by the storm.

“Americans are in harm’s way and the president is laser-focused on ... covering up a small mistake he made,” tweeted former FBI Director James Comey, a noted Trump critic. “Narcissism is not leadership. America deserves better.”

Trump has made a career of not acknowledging errors, going full steam ahead even when caught in an error or lie.

“I think apologizing’s a great thing, but you have to be wrong,” he said in a 2016 interview. “I will absolutely apologize, sometime in the hopefully distant future, if I’m ever wrong.”

That approach has, at times, served him well, allowing him to plow though controversies assured that many of his followers choose to trust his word over the press. But critics say it is one thing to claim Trump Tower in Manhattan has 68 stories though by any measure it has 58, and it is another to use government resources and push his staff to reverse-engineer something in an attempt to suggest he was right all along.

After he loudly warned of the dangers of a caravan of migrants in 2018, administration officials cited a terrorism arrest statistic that was proven false. When Trump said he had ready a middle-class tax cut plan before the midterm elections, though nothing had been discussed, officials scrambled to craft a plan. When Trump fumed that the size of his inaugural crowd was reported to be smaller than his predecessor’s, White House press secretary Sean Spicer was forced to defend the false claim. And even when Trump mistakenly tweeted the nonsensical word “covfefe” late one night, the president, instead of owning up to a typo or errant message, later sent Spicer to declare, “I think the president and a small group of people know exactly what he meant.”

Trump has owned up to a few mistakes: He apologized, once, for the Access Hollywood tape that captured him boasting about groping women — though he later mused that the audio might be fake. And the mistakes he has made in office were, by his account, the appointments of officials who have let him down, like Federal Reserve Chairman Jerome Powell and Attorney General Jeff Sessions.

His attitude is no joke to those who worry about the potential consequences when the matter is far more grave than a weather map.

“The Constitution, with its checks and balances, was drafted on the intellectual foundation that we all make mistakes all the time: a president does, Congress does, the courts do, the people do,” said Meacham. “It’s remarkable that more harm hasn’t come of it. It would be funny if it weren’t so serious.”