JUCHITAN, Mexico (AP) — Thousands of Central American migrants resumed their slow trek through southern Mexico on Thursday, as immigration agents and police nibbled at the edges of the two caravans currently in the country.

Mexican authorities haven’t directly targeted the main caravan of about 4,000 migrants, and activists aiding that group said they were shifting their route toward the Gulf coast, a path closer to the Texas border.

But a second, smaller caravan about 200 miles behind the first group appeared to be more leaderless, get less press attention and be more vulnerable.

A federal official who was not authorized to be quoted by name said 153 migrants in the second caravan were detained Wednesday during highway inspections in the southern state of Chiapas, a short distance from the Guatemalan border. While the precise size of the second caravan is unclear, that could be equivalent to about 10 percent of those participating.

And there was also pressure on the first caravan, which set out before dawn Thursday from Juchitan, Oaxaca, seeking to reach the town of Matias Romero, about 40 miles (65 kilometers) ahead.

They had tried to arrange bus transport from Juchitan, but failed, leaving them once again on foot, hitch-hiking and looking for rides where they can find them. 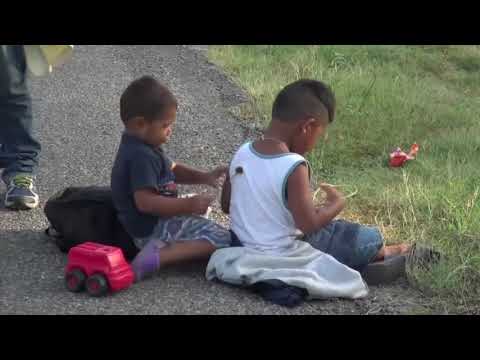 But federal police began pulling freight trucks over and forcing migrants off, saying their habit of clinging to the tops or sides of the trucks was dangerous.

“Get off! Get off!” police officer Benjamin Grajeda shouted to a group of migrants clinging to the side of a truck outside Juchitan. “You can ride inside, but not on the outside.”

At other points along the route, police have forced overloaded pickups to disgorge migrants. On previous days, they have ordered passenger vans to stop transporting migrants.

The migrants have not said what route they intend to take northward or where on the U.S. border they planned to reach.

While Matias Romero would take them toward the Gulf coast city of Veracruz and a route toward the Texas border, another large caravan early this year passed through Veracruz and then veered back toward Mexico City and eventually tried to head to Tijuana in the far northwest. Few made it.

In Matias Romero, the migrants complained of bad smells and snakes in the area where they were told to camp overnight at the entrance to the town. Local authorities told them they couldn’t occupy the main square because of Day of the Dead events to be held there.

Late Thursday, the migrants decided to leave at 5 a.m. Friday toward Veracruz, with their destination either Donaji or Sayula de Aleman.

“Mexico has stepped up in an unprecedented way,” Sanders told Fox News. “They have helped stop a lot of the transportation means of these individuals in these caravans, forcing them walking. They have helped us in new ways to slow this down, to break this up and keep it from moving as aggressively toward the United States.”

But U.S. President Donald Trump ramped up his pre-election focus on the caravan and others behind it, talking of creating a U.S. military force on the border that would outnumber the migrants, many of them women and children.

“As far as the caravan is concerned, our military is out,” Trump said. “We have about 5,800. We’ll go up to anywhere between 10,000 and 15,000 military personnel on top of Border Patrol, ICE and everybody else at the border.”

Later Wednesday, Trump told ABC News, “We have to have a wall of people.”

A third band of about 500 from El Salvador made it to Guatemala, and a fourth group of about 700 set out from the Salvadoran capital Wednesday.

Altogether, the four caravans represent just a few days’ worth of the average flow of migrants to the United States in recent years.

Similar caravans have occurred regularly over the years and passed largely unnoticed, but Trump has focused on the latest marchers seeking to make border security a hot-button issue in next week’s midterm elections.

Worn down by days of long walks, many migrants have dropped out and returned home or applied for protected status in Mexico. The Interior Department said Thursday that the number of migrants who have applied for refuge was now nearly 3,000.

The initial caravan has shrunk significantly from its estimated peak of more than 7,000 migrants. A caravan last the spring ultimately fizzled to just about 200 people who reached the U.S. border at San Diego.

On Wednesday, a Guatemalan woman gave birth to the first known caravan baby at a hospital in Juchitan. Mexico’s governmental National Human Rights Commission said it had arranged for medical attention for the woman, who was 38 weeks pregnant, and the girl was healthy.

This story has been corrected to say the woman was 38 weeks pregnant not 28 weeks.