WASHINGTON (AP) — It may be special counsel Robert Mueller’s Russia investigation report , but the spotlight Thursday belonged just as much to the attorney general who made it public.

The report had not yet been released when William Barr, by turns testy and defensive, took the Justice Department podium to face questions about the now-concluded probe. He was there not only to detail the main conclusions of Mueller’s investigation but also to explain his handling of the report following a reputation-bruising month that has fueled skepticism from Democrats about whether the attorney general is functioning as a Donald Trump loyalist.

“It seems puzzling for someone with a long career at the department,” said Arun Rao, a former federal prosecutor in Maryland who served under Deputy Attorney General Rod Rosenstein. “Particularly today, his behavior seems to be more of an advocate for a client rather than representing the department.”

At his press conference, Barr stressed about a half-dozen times that Mueller did not find evidence of collusion between the Trump campaign and Russia, a point Trump has seized on to try to claim vindication. He acknowledged that Mueller closely scrutinized the president for obstruction of justice but said he and Rosenstein disagreed with some of Mueller’s legal theories. He also praised the White House’s cooperation with the investigation and appeared to justify the president’s anger over it, saying Trump “faced an unprecedented situation” and people must bear in mind the context. 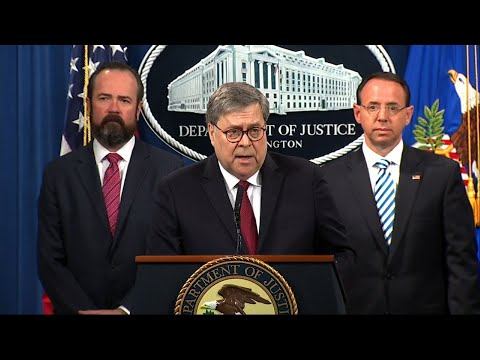 ″(T)here is substantial evidence to show that the president was frustrated and angered by a sincere belief that the investigation was undermining his presidency, propelled by his political opponents and fueled by illegal leaks,” Barr said.

He gave a terse “no” when asked by a reporter if he was concerned that it might be improper to hold a news conference before the report was public. He brushed off questions about whether he was protecting the president, saying he wasn’t sure what the basis was to say he was being generous to Trump.

A Justice Department official familiar with Barr’s thinking said Barr simply wanted to confront head-on questions that he knew were lingering, including about the redaction process and interactions about the report between the Justice Department and the White House. The person, who spoke on condition of anonymity to discuss internal discussions, said Barr was following through on his commitment at his January confirmation hearing to be as transparent as possible by releasing a lightly redacted version of the Mueller report even though the regulations don’t require any such disclosure.

Skepticism of Barr’s approach to Mueller’s investigation mounted last month when he condensed the 448-page report into a four-page summary letter that Democrats said glossed over the special counsel’s more damning evidence against Trump. Last week, he echoed Trump’s own rhetoric by saying he believed his presidential campaign had been spied on and that he would investigate the origins of the investigation into potential collusion between Russia and the Trump campaign.

His press conference on Thursday was held without Mueller or members of his team and, critics charged, enabled Barr to place his own spin on the report’s main findings before the American public even got a chance to see the document.

Those actions have escalated partisan anxiety about Barr’s trustworthiness and taken a toll on the standing of a Justice Department veteran who won over some skeptical Democrats with a smooth confirmation hearing at which he pledged independence and transparency. Congressional Democrats have demanded to hear from Mueller himself, with House Speaker Nancy Pelosi and Senate Minority Leader Chuck Schumer citing a disconnect Thursday between Mueller’s obstruction findings and the way Barr portrayed them.

“This is not a major hit to Bill Barr’s reputation,” Flanigan said.

Barr signaled his own skepticism of the investigation even before he took office with an unsolicited memo to the Justice Department last year in which he criticized Mueller’s obstruction inquiry. But his appointment nonetheless won bipartisan support, especially coming after the president’s selection of Matthew Whitaker, the acting attorney general who was attacked by Democrats as an unqualified Trump insider. At his confirmation hearing, Barr broke from some Trump talking points and defended Mueller as a longtime friend who’d never involve himself in a “witch hunt” like the president has maintained.

But his tone toward the investigation shifted in recent weeks as he learned more about Mueller’s findings.

He raised eyebrows at a congressional hearing last week when he said he believed the president’s campaign had been spied on, likely a reference to a secret surveillance warrant the FBI obtained to monitor the communications of a former Trump campaign associate. The person familiar with his thinking said Barr, who early in his career worked for the CIA, did not mean the word in a pejorative sense and was referring to intelligence collection activities.

He also changed his take on the “witch hunt” question, saying it was all a matter of perspective and that someone who feels falsely accused of something would inevitably dislike the investigation.

Frank Montoya, a former FBI supervisor, said he had given Barr the benefit of the doubt but was concerned by the ways in which Barr’s thinking appeared to align with Trump’s.

“He can’t not know that we’re in highly partisan times,” Montoya said of Barr. “To throw fuel on the fire the way that he does, all that it does is reinforce the idea that Trump is right.”

For complete coverage of the Mueller report, go to https://www.apnews.com/TrumpInvestigations