SALEM, Ore. (AP) — A parade of trucks and tractors circled the Oregon Capitol on Thursday in support of Republican lawmakers who have walked out to block emissions-lowering climate legislation in a political crisis that stretched into an eighth day.

All 11 Republican senators were once again missing from the Statehouse, denying Democrats the numbers to vote on the plan that would be the second in the nation to cap and trade pollution credits among companies.

Despite assurances from the Democratic Senate president that the measure doesn’t have enough support to pass, Republicans stayed away. They say conservative voices weren’t included when crafting the legislation and that the “job killing and truly life altering bill” should be sent to voters for final approval.

Democrats have resisted sending the measure to the ballot because it could jeopardize an ambitious timeline to begin the emissions-cutting program by 2021.

Hundreds of farmers, loggers and truckers rallied at the Capitol in solidarity with the Republican senators, pushing them to stay away until the legislative session ends Sunday.

The climate plan has exposed lingering tensions between cities like Portland and more rural areas of the state. Rural residents say Democrats from urban areas don’t understand their way of life. 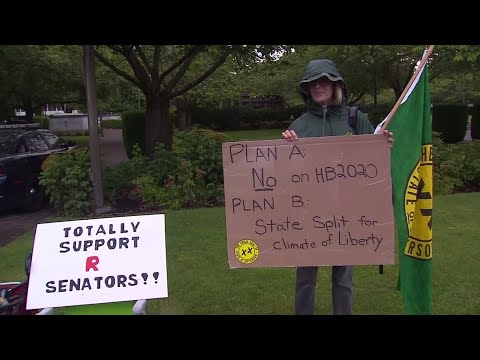 “Who better takes care of this earth than you all do?” Andrew Miller, CEO of Stimson Lumber, said to a crowd of loggers and truckers. “Yet the policies that are being passed by the Legislature are going to disproportionally harm you and your families.”

Miller announced in May that he would lay off at least 60 timber workers at a mill near Portland in anticipation of the climate legislation and other policies pursued by Democrats.

Democrats have made dozens of concessions to respond to concerns from conservatives and industry leaders, but they didn’t go as far as conservatives had hoped.

Following the announcement that the proposal had lost support in the Senate, Democrats appear to have shifted gears and are now imploring Republicans to return to vote on dozens of measures caught up in the stalemate , including money to expand affordable housing and address the state’s beleaguered foster care system.

Democrats say the legislation is critical to make Oregon a leader in the fight against climate change and will ultimately create jobs and transform the economy. It aims to dramatically reduce greenhouse gases by 2050 by capping carbon emissions and requiring businesses to buy or trade for an ever-dwindling pool of pollution “allowances.” California has a similar program.

If the Oregon session ends, Brown is prepared to call a special session, but all legislation would have to be reintroduced — essentially starting from scratch. She has frozen agency budgets at current levels, delaying expected funding increases for higher education and the state’s foster care system.

But Republicans — who have left the state to avoid taking a vote — say their walkout is worth it despite the governor sending state police to round them up and getting fined $500 a day. The protesters at the Capitol agreed.

“They are doing exactly what we want them to do,” said Tkeisha Wydro of McMinnville, northwest of Salem. “The senators who walked out have incredible integrity and have the full support of rural Oregonians.”